A lot of good new comics have started lately, and one that doesn't seem to be getting much attention is the new creator-owned series from DC, The Mighty, written by Peter Tomasi and Keith Champagne and drawn by Peter Snejbjerg. I also haven't seen a lot of promotion for the series from DC's end, and that's a shame, because this is a series clearly deserving of more attention. 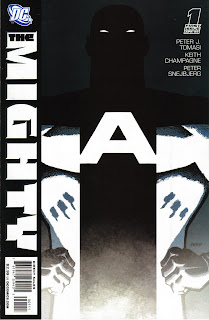 On the surface, The Mighty has a familiar Watchmen vibe, as this is another attempt to examine the possibility of superheroes in the real world. In The Mighty, the world only has one superhero--Alpha One--who is a former Navy sailor caught in a nuclear test and given fantastic powers back in 1952. To the creators' credit, they take care of this fairly basic origin in an efficient two pages. That's because the real focus of this book is not the superhero himself, but the support staff that surrounds the superhero in a global, private police force called Section Omega. More specifically, the focus is on Gabriel Cole, the second-in-command of Section Omega behind his mentor, Captain Michael Shaw. Cole has a well-known history with Alpha One: as a child, Cole was rescued by the hero from an accident that killed his parents, and young Gabriel became an instant celebrity.

The first issue feels like a solid pilot episode, clearly establishing the world in which the action takes place while still setting up a compelling story. A two-page origin in the form of a newsreel, followed by an interview with Captain Shaw by a Larry King-lookalike, provides all the exposition we need. The primary action involves a train accident that was saved by Alpha One, and we get to see how Section Omega functions as a clean-up operation for the hero's adventures. But there are also hints that this is no simple train accident, as four passengers go missing.

By the end of the first issue, we realize that something is clearly wrong with Alpha One, and the central conflict of the series will ultimately revolve around Gabriel Cole's idealistic vision of his hero and savior and the mounting evidence he experiences about Alpha One's sinister secrets. The final scene of the first issue hooked me in to the series: we are aware that something is desperately wrong, yet Cole is too naive to see the danger. 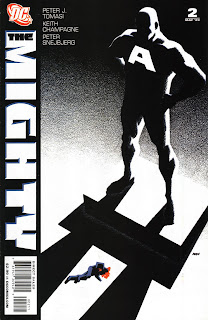 While the first issue reads like a good pilot episode, the second issue continues to build on the suspense and the compelling mystery that will be at the heart of this series. The Mighty isn't being defined as a limited series, but there clearly seems to be an endgame in mind once that central mystery is resolved, similar to a Vertigo series like Y: The Last Man or 100 Bullets. Whatever the case, the series feels like it has some forward momentum that is leading somewhere, and Tomasi and Champagne have created a series that has me curious to see how it develops on a monthly basis. In fact, on the basis of the first two issues, I'm more interested in following this series from month to month than in waiting for the trade. It has the feeling of a good weekly TV series--like Lost or one of the better seasons of 24--that generates anticipation for each new episode.

Also, Peter Snejbjerg is a perfect choice as artist on this book. Snejbjerg has a clean, classic style that hearkens back to the Golden Age, as this homage to Superman 1 exemplifies: 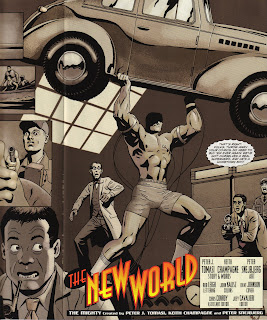 That style contributes significantly to the overall feeling of this series, that the world views Alpha One as a classic, pure hero, when the hidden truth is much darker.

As a creator-owned book set in its own universe but published by DC, The Mighty has a steep hill to climb if its going to attract an audience that will keep it going for its required length. I have to say that I was originally sceptical of the series when I place my order for the first issue, as its premise seems to tread familiar ground--yet another dark look a a Superman analog. But now I'm hooked in, and I hope that word of mouth spreads on this series to give it the promotional boost it needs.
Posted by Dr. K at 12:31 AM

finally someone else on the internet who agrees with me on this.

DC seems to do this weird thing where they'll take a chance releasing these creator-owned superhero books under their main imprint... and then not promote the things at all. At least The Mighty didn't end up like The Family Dynamic, which was a smartly-written, fun team book with great art that wound up being cut from 6 to 3 issues and shunted off to Johnny DC.
Anyway, I've also been enjoying The Mighty a lot... one thing I like is that the "hidden truth" isn't being alluded to blatantly; each scene, taken on its own, seems pretty straight-forward, but when read together, the cumulative affect winds up coming across as much more sinister.
Hopefully this manages to find and keep an audience.

Thanks for the tip. I picked up the first two issues yesterday, loved them. Good call.

I had this on my radar and reading this recommendation got me the first two issues. So far, I'm definitely intrigued. The book has a nice, creeping sensation of the unknown. Alpha One is also starting to get a kind of creepy menace to him, the kind we'd associate with anyone who suddenly showed up at our window, staring in. A nice start to a strong premise.

The Mighty started off great and keeps getting better with every issue. I've just finished #4, and watching Cole have a great ol' time while the reader has an increasingly uneasy feeling about Alpha One - well, it's good stuff. Love Tomasi.