As I mentioned in the last Blackhawk Wingsday post, the Blackhawks' mascot, Blackie, was given an education and consciousness in the stories, so that he would often come to the team's rescue when they needed his help. As his character developed in the story, he was also occasionally given his own one-page humor strips, drawn by the great Henry Boltinoff, who was responsible for many of the humor strips that ran in 60s DC Comics.

In this strip, from Blackhawk 196, Blackie just happens to be hanging out in the woods when an escaped con comes by, and the hawk decides to take matters into his own hands...or beak. 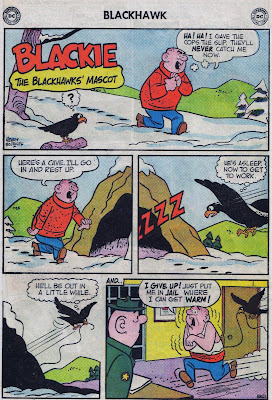 This con must have a load of confidence that the cops he escaped from are incompetent, because I can't imagine it would be all that difficult to follow his tracks in the snow all the way to the cave.

Also, Blackie is kind of lucky that his plan worked. I mean, instead of rushing off to jail to get warm, the con could have broken into a nearby farmhouse and taken a family hostage or something. There are a lot of ways this whole thing could have gone really bad.

This strip is not the only thing going on in this issue, however. Blackhawk 196 is an important turning point in this series, so I will be spending a lot of time on it in the next few weeks. For one, the creators start getting credited on a regular basis. Also, the Blackhawks get a new ongoing mission that helps define the team better than the random crime fighters that they had been for many years. But all that will have to wait until next week.
Posted by Dr. K at 10:49 PM

My momma always told me if I walked around talking out loud to myself a tiny, sapient hawk would attempt to steal my clothes. I shoulda listened to momma.

That reminds me -- the local authorities have been warning people not to leave their small pets outside, or else the eagles might get them. Hmmmmmm ...