I just wanted to let readers out there know that I'm going to have to put the blog on hiatus for a week or more.

Here we are at the beach a couple of Christmases ago: 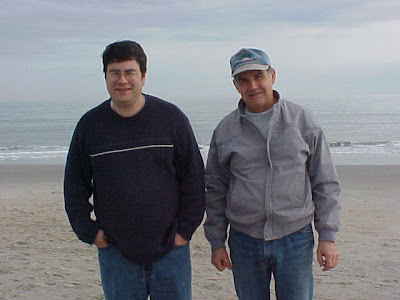 I was lucky to have a great dad. For one, he was the funniest person I ever knew. He had impeccable timing and could tell a joke like no one else. He had a particular affinity for Mel Brooks--he took my brother and I to see Blazing Saddles and High Anxiety at least a couple of times each, and we watched those movies whenever they came on network TV. When History of the World Part I came out, he went to see it on his own, and, having determined that it was not suitable for us, he came home and recited some of the best lines. I think we were the better for it.

He also loved The Graduate. When my brother and I were kids, he would frequently say to us, "Son, I want to say one word to you, just one word. Are you listening? ... Plastics," and we wouldn't understand what he was talking about, but it clearly entertained him. When I graduated from college, he and I went to a screening of the film on campus, and it was one of the great bonding moments we had.

He was a cool dad, too. He rode a motorcycle, for one. Also, when I was really little, he had posters of Steve McQueen in The Great Escape and Clint Eastwood in A Fistful of Dollars up in our house. These iconic images made an indelible impression on me at the age of three or four in a way that he could never have anticipated. There were so many things he was enthusiastic about--James Bond movies, Diana Rigg in The Avengers, F. Scott Fitzgerald, Robert Pirsig, Hunter S. Thompson, Catcher in the Rye, The Beach Boys (though he didn't really like Pet Sounds because there weren't enough songs about cars, girls, and surfing)--and I became fascinated with these things because they clearly gave him so much pleasure. It was clear from all of these examples that my tastes were set at a very early age, and I have him to thank for that.

All this also illustrates another important lesson that he taught me: to pay attention to the culture around me, especially those things that give me pleasure, and to use my memory to return to those pleasures again and again. He taught me this by reciting lines from movies and lyrics to songs, and by quizzing me on song lyrics when they'd come up on the radio: "I'll give you a dollar if you can name this song." There was never a real dollar involved, but I took the challenge nonetheless. Even in recent years, we would recite lines from The Simpsons to each other on the phone as if that were the most important thing we had to talk about.

My father was also an artist. Until I was seven, he was a gym teacher (which is a pretty cool job for a dad to have), and then, due to a variety of circumstances that included a move to a new state, he decided to become self-employed as a cabinet maker. He worked alone, without assistants, and also without a boss, which was probably the ideal situation for him, because he could decide what he wanted to make and for whom. This may not have been the most practical path to take always, but there was an uncompromising authenticity to it that I admired tremendously. For many years, his specialty was kitchens, but in more recent years, he limited himself to smaller cabinets and single pieces. I'm lucky to have one of the first pieces he ever made.

So, I'm putting this out there, despite the fact that I was only planning on posting a couple of lines about the blog being on hiatus. But in thinking about this blog, and about how its primary purpose is to allow me to express my feelings about those things--movies, comics, books, TV shows, music--that give me pleasure, I realize that you can draw a direct line from my dad's influence on me to what I do here. And for that influence, I will always be thankful. 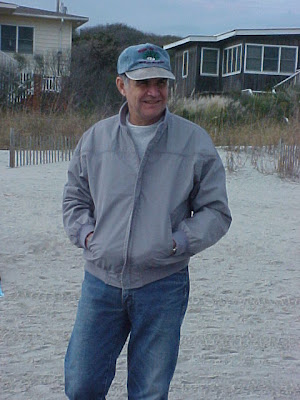 A touching tribute. Those early memories are so important. My father instilled a sense of wonder in myself as well. Thoughts are with you, stranger.

I'm very sorry for your loss. My father passed away several years ago, and hardly a day goes by without his influence still playing a role in my life and how I raise my own son.

So sorry for your loss, but I'm sure he would have been pleased by such a glowing tribute from a very proud son.

I'm sorry to hear of your loss, Dr. K... my own father passed away just last month, so I understand what you're going through. Take as much time as you need to deal with this... and we'll be here when you start posting again.

Andy, I am very sorry to hear about your loss. Your father sounds like a great guy.

I'm very sorry for your loss, Dr. K. If your day-to-day interactions with your dad were half as heartfelt as what you've written here, it's obvious you had a special relationship — thanks for sharing a little bit of that with us. My thoughts are with you and your family.

Very nice tribute--I hardly know you (having just recently starting reading your blog) and know nothing of your dad, but this had me reading all the way through.

What everyone has said so far. Thanks for posting this.

very sorry to hear of your loss, and a fine tribute indeed to your dad.

And my condolences as well. Take care of yourself and your family.

Dr. K, I am so sorry for your loss. Your wonderful words make me think about all of the times my father made me sit down on the couch with him every single time the Magnificent Seven or the Adventures of Robin Hood came on the TV. I don't think I can ever thank him enough for that, but I'll make sure to do it one more time today. I'll keep you and your family in my thoughts.

I'm sorry for your loss. Thanks for sharing this personal story. Take care.

My thoughts are with you. I just had to put my own dad in a rehab center, and things have been touch and go, so I feel some of your pain.

Just a beautiful post--touching and lovely. Your dad must have been so proud of you. love, d