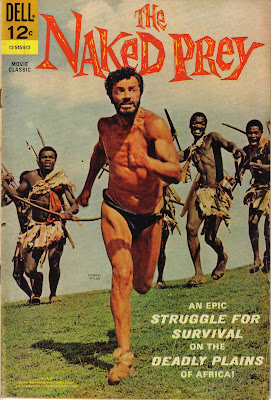 If you like Die Hard, but find it doesn’t quite satisfy your colonialist ideology, then Cornel Wilde’s 1966 masterpiece The Naked Prey --which recently came out in a new DVD edition from Criterion--may be the movie for you. The Naked Prey is basically “Die Hard in southern Africa, “though it would be more accurate to say, “Die Hard is The Naked Prey in a skyscraper.” Die Hard, as well as other subsequent action films of the type, borrows from Wilde’s 1966 film in specific terms (both heroes have to concern themselves with foot trauma) and general ones (both films follow similar episodic structures as each hero has to overcome various smaller obstacles on the way to the larger goal, often picking up weapons and supplies along the way that will help in later scenes). If Die Hard is the ideal of contemporary action films (and it is), then viewers and contemporary action filmmakers should pay careful attention to The Naked Prey as a perfect model for a pure action film.

The Naked Prey is a lean movie set in mid-19th century southern Africa. All characters are unnamed: Wilde (who directed and starred in the film) is only referred to in the credits as "Man," and we get absolutely zero backstory on his character, other than the fact that he is a white safari guide. Events are set in motion quickly when an arrogant white hunter (Gert Van Der Berg) insults local tribesmen looking for tribute. Soon after the hunters are through with their elephant hunt, the tribesmen attack and take the hunters prisoner.

The tribesmen proceed to torture the hunters in a scene that remains shocking some 40+ years later (the film is surprisingly violent, with many brutal scenes barely obscured. It may be, in fact, the first mainstream Hollywood film to feature arterial spray.). One is tied and dressed like a chicken and then forced to hop around in order to diminish his dignity before he's beaten to death by the women of the tribe. Another, the hunter guilty of the insult, is tied, spread-eagle and face down, as a cobra bites him in the face. A third, in one of the more horrifying scenes in film history, is covered in red clay and then baked on a spit.

Wilde's character, because he initially objected to the white hunter's insult of the tribesmen, is shown respect and given special treatment that the others don't warrant: the tribesmen strip him of his clothes and give him a few hundred yards' head start before they begin chasing him one at a time.

From here on, the movie focuses on the chase, with Wilde having to find more and more ingenious ways to escape his pursuers. And for most of the film, this is done entirely without dialogue. According to the commentary by film scholar Stephen Prince, the continuity script for The Naked Prey contained only 9 pages of dialogue, and much of that is the untranslated dialect of the pursuing tribesmen. Otherwise, the 96-minute running time of the film consists almost entirely of action, with Wilde's character under constant threat from both the pursuers and his environment. Even when he sits to rest, he's beset upon by insects, and the film often takes these moments to cut to stock footage of animals hunting and killing each other. And when he wakes up from sleeping on the ground, Wilde's physical performance shows just how painful that is.

Much of the film's efficiency depends upon Cornel Wilde's physical performance, which is pretty amazing, especially considering that the actor was in his mid-50s when he made the film (alternately, I am in my late 30s, and I need to rest for several hours after mowing the lawn). Wilde undergoes some brutal scenes, none of which seem faked, like sliding down a rocky slope in nothing but a loincloth. During the making of the film, Wilde even became sick and injured after breaking up a fight between a python and an iguana and getting bitten by the ungrateful iguana, but he used the health problems to add some realism to his performance.

The Naked Prey is a pure action film that should stand as the primary model for how to make a lean, efficient, effective, and exciting film. In fact, it shows what little you need to do so, and watching this film will reveal just how much unnecessary baggage most action films have. The movie begins with the hunt and ends when the chase is over, leaving out both exposition and denouement. We care about Wilde's fate because the film shows us that he is a good man, even though we don't know a thing about his life, or even his name. The tribesmen are also humanized in brief scenes where they mourn the deaths of their companions, so the film does not depict them as caricatured villains. But Wilde, as director, conveys most of the information visually, through action and expression. This is clearly an actor's film, and it's easy to see why Wilde was attracted to the challenge the movie presents him as both an actor and a director. Yet the direction doesn't seem ego-driven: Wilde effectively uses widescreen Cinemascope cinematography to provide expansive shots of the action in particular and the African location in general in a way that minimizes the human characters within the natural landscape.

The Naked Prey is not lacking in complexity despite its efficiency. As Prince points out in the commentary, the film problematizes both colonialist and Darwinian interpretations, and thus separates itself from the more troubling African adventures of the period. While we often see animals playing out the hunter/prey dynamic which should stand as a metaphor for the film's plot, the human characters often belie that reductive binary. In one of the film's most effective scenes, Wilde comes across a village being attacked by slave traders. He manages to protect and save a young girl while also putting himself at extreme risk, and this shows that humans can make choices outside the narrow Darwinism that the nature scenes often depict. Though the film still has some problems in its depictions of race and the privileging of the white perspective--it was made in 1966, after all--it also subtly undermines a straightforward racist, colonialist interpretation.

By the way, the Dell Movie Classics adaptation, which I happen to have in my collection, of the film is surprisingly faithful, probably because the film's efficiency required little condensing from screen to page. However, the comic does have to rely more on dialogue and thought balloons to convey information that the film conveys through the actors' physical performance, as these two examples demonstrate:

The art here is by Joe Sinnott and Vince Colletta (the latter's inking is pretty easy to spot).

Check out the trailer for The Naked Prey here, and you can buy the Criterion edition here.

I'm also curious to see what kind of Google hits I get with a post that repeats the word "naked" so often.
Posted by Dr. K at 5:26 PM

Your mention of the foot trauma in Die Hard and The Naked Prey reminded me of Clive Owen's (Theo's) problems with finding decent shoes in Children of Men. Do you suppose that film also owes a debt to The Naked Prey?

The key piece of equipment that every action hero needs is a decent pair of shoes.

But seriously, it's also a trope in lot of war movies, where soldiers on long marches become obsessed with finding better boots, even taking them off of dead bodies, so Children of Men may be playing a riff on that genre as well.

Geez. That clip was brutal.

Although the chicken man may have gotten off easy compared to the guy roasted on the spit.