So, yesterday was my 40th birthday. The Other Dr. K conspired with Chris Sims to throw an awesome surprise party on Friday. A BATMAN-themed party, I should add (the awesomeness of which was only slightly diminished by the fact that Batman is now dead and never coming back). 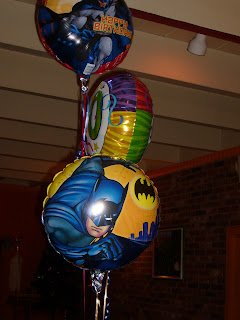 The guests at the party were primarily friends from work, and I don't think all of them were quite aware of my "scholarly interest" in Batman before this event. And I wonder what kind of looks the Other Dr. K got when she picked out the Batman balloons along with the "40" balloons.

Chris Sims gave me a buttload of DC Showcase Presents and Marvel Essentials editions, probably enough to last me until next year. 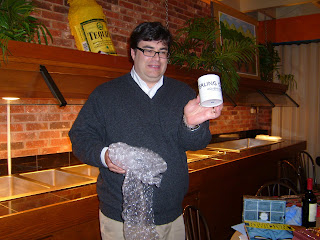 A colleague gave me a Sterling Cooper Advertising coffee mug. I don't think my facial expression in this picture quite captures my real excitement, because this gift puts me just one step closer to my goal of having an office as awesome as Don Draper's. Now all I need is the art deco furniture, a full bar, and some ashtrays.

Speaking of Mad Men, another gift I got which would fit that milieu was this: 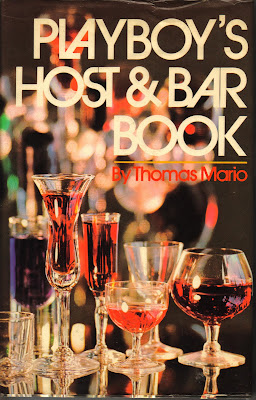 Playboy's Host and Bar Book from 1971. The book is everything you'd expect from the time period, including a a Cold War-theme running through the section on vodka drinks. (The "Kremlin Colonel" includes vodka, lime juice, sugar, and mint.) However, I was surprised that the chapter on "15 Types of Parties" did not include an entry on "Key Parties." Perhaps Playboy was reserving that for its own special book.

I was also surprised by the large number of drinks with a raw egg in the ingredients, including a whole section of "flips," which are defined by the inclusion of a raw egg.

This book is definitely going to require further study.

Anyway, thanks to everyone who helped make the birthday special, and also to those who sent birthday wishes through Twitter and email. Now I'm going to mix up a Kremlin Colonel while playing with another gift, the Quantum of Solace game for the Wii.
Posted by Dr. K at 9:34 PM

Happy birthday! You're one lucky sumbee --- those are great prizes. I mean gifts. Well, prizes in that you won life for another year.