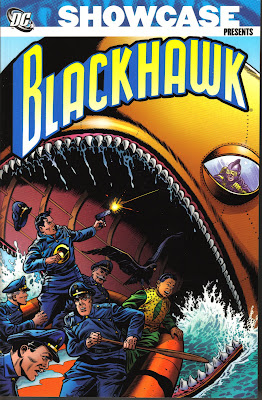 The recent Showcase Presents: Blackhawk collection features a disclaimer at the end of the table of contents: "The comics reprinted in this volume were produced in a time when racism played a larger role in society and popular culture, both consciously and unconsciously. They are reprinted here without alteration for historical accuracy."

However, one doesn't have to go far into the book to question why, of the many offenses on exhibit here, racism in particular was singled out. A better disclaimer would be something like, "Look. These comics are old. There may be a lot wrong with the world today, but after reading this, you will have to admit that some progress has been made in the last 50 years. Racism, sexism, and cultural insensitivity in general are not nearly as rampant as they once were. And the next time you see Tom Brokaw, hit him over the head with this book and let him know that this is what his so-called 'Greatest Generation' produced." 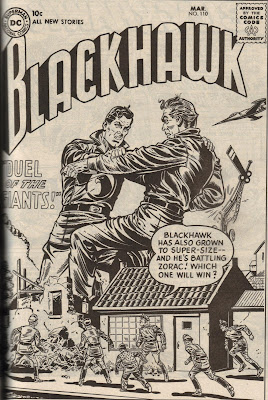 In this issue, Blackhawk ill-advisedly responds to an email titled, "Gain Inches the Easy Way!"

A case in point, from Blackhawk 110: "The Mystery of Tigress Island," in which the Blackhawks take on their distaff doppelgangers, The Tigresses! 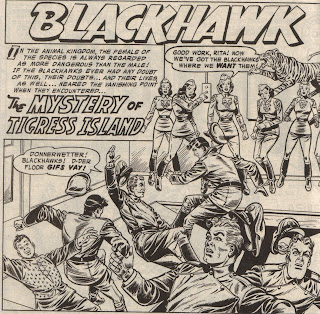 Like the Blackhawks, the Tigresses are a team of international aviators (aviatrixes?) with a multicultural make-up. Led by an American named Joan, the team also includes Frenchwoman Yvette, Norwegian Ilse, and Spanish-speaking Rita-- 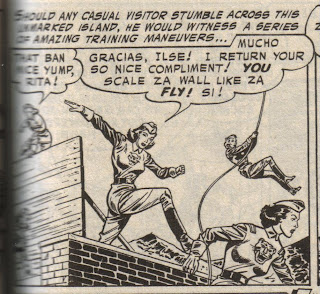 --whose Spanish really sucks. Or is it meant to be ironic that she fails at gender agreement?

The Tigresses lure the Blackhawks to their island hideaway--which is identical to Blackhawk Island--with the offer to help capture the wanted criminal mastermind, Kurt Ostrec. The Blackhawks, however, do not want any help with this dangerous criminal. Whatever it is that the Blackhawks do, it's too difficult for women, as Blackhawk explains in every other panel, including this one where Joan introduces the rest of the team. 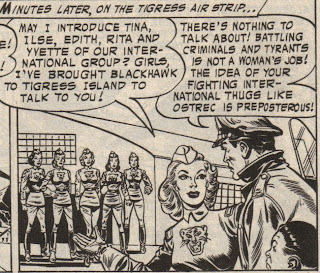 The Blackhawks underestimate the Tigresses and fall prey to their cunning honey trap: 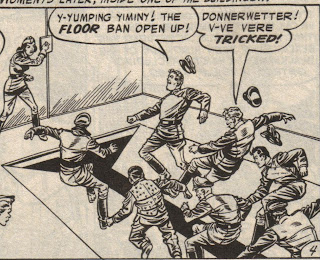 Fortunately, two of the seven Blackhawks are able to spout their culturally stereotypical catchphrases while falling into the pit.

With the Blackhawks trapped, Joan and the Tigresses send a message to Kurt Ostrec, informing him of their success. Ostrec arrives on Tigress Island thinking that he now has the amazing opportunity to do away with his foes once and for all, but he quickly realizes that something else is afoot.

It turns out, the Tigresses' real target was Ostrec himself, but their plan to kill the villain is stopped by the timely escape of the Blackhawks. After Ostrec has been captured, Joan explains their motives: all the Tigresses are widows of men killed by Ostrec. 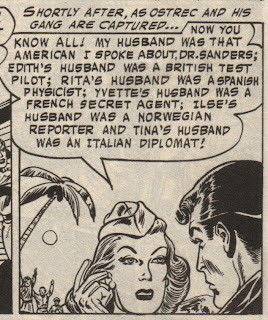 Hey, Joan, try varying your sentence structure once in a while.

As the Blackhawks take Ostrec into custody, the Tigresses--and the reader--learn a valuable lesson about essentialized gender roles in relation to crime fighting. And it's one of the many valuable lessons readers can find in the pages of Blackhawk!
Posted by Dr. K at 11:44 PM

Please don't let Frank Miller get his hands on any possible Blackhawk movie--there are so many bizarre moments in those panels you posted I could picture him rubbing his hands with glee over the idea.