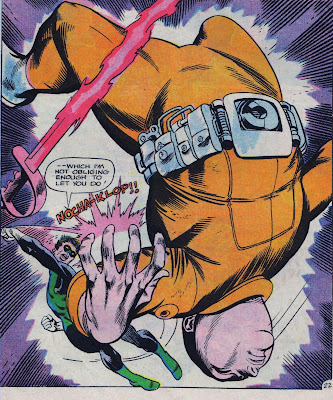 Not only is that punch great b/c the physics of it seem inexplicable, but it looks like it's a back-punch, which is the most hardcore of punches. (Though, he's probably just flipping over after being punched in the face, yes?)

That is awesome, he looks like he's going to fly off the page and land in your lap.

Kane has always been my second-favorite comic book artist of all time (behind Jack Kirby, naturally). Looking forward to all the punches -- and if you feel like just including some great flying shots here and there as a second feature ("The Gil Kane Flight of the Week") or some other regular Kane feature ("The Gil Kane Babe of the Week", anyone?), I'm sure nobody will complain at all!

That fantastic, crazy punch perfectly sums up my feelings about my freshman comp class this semester. I was looking for comics but found an objective correlative. Thanks, Dr. K!

Someone (NOT ME) really needs to start an entire blog dedicated to Gil Kane punches. I haven't read it for years, but there's one in the Midnight tale he drew for DC's Secret Origins that blew my mind.

Ooh, I have that issue of Secret Origins. Thanks for the tip, Seth--I'll put it in the queue.

I'm reading the Atom Showcases which I thought would be dull, but it's almost like Gil Kane's version of Spider-Man (in fact, moreso than his actual issues of Spier-Man), little more than Atom bouncing around and punching the shit out of people.

In fact, I think there's a panel in either Captain Marvel or an issue of What If, where you've got the Gil Kane trifecta--the crazy punch, the giant floating head, and someone gripping the sides of their head in anguish--all in one panel. I'm worried if I see that panel now, I'll die of awesome overdose.