In honor of Veterans Day, though this post is coming in pretty late, I wanted to go back to a wartime Blackhawk story to see just how the Black Knights handled themselves against the dirty Ratzis. So, we're going back to Military Comics 9 (Apr. 1942), where the Blackhawks find a mysterious ally in "The Man in the Iron Mask" (written by Dick French, drawn by Chuck Cuidera). 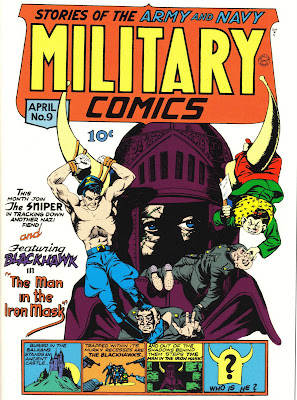 Also, as you can see from this cover, Chop-Chop is about to use his meat cleaver to whack off the nose of a Nazi.

The story opens with the Blackhawks meeting to pay tribute to Andre, who, according to the captions, has recently given his life by hurling "his body down a mountainside, causing a landslide which crushed an entire Nazi division, saving the lives of the Blackhawks..." Now, I may just be a very poor reader, but the previous Blackhawk stories in this collection don't actually show Andre's sacrifice, despite the fact that the caption states, "Most of you will remember..." and several previous stories do feature avalanches. So, unless Andre's heroic sacrifice appeared elsewhere, this story is already a bit confusing.

The team is about to leave their little memorial service when they realize the rain has picked up to the point that they cannot fly safely, so they decide to take shelter in a nearby castle. Blackhawk and Olaf go off to scout the place out while the rest of the team cools their heels waiting.

On their search, Blackhawk and Olaf are met by the mysterious Man in the Iron Mask, who appears from a secret passage to warn them that they are not alone in the castle. 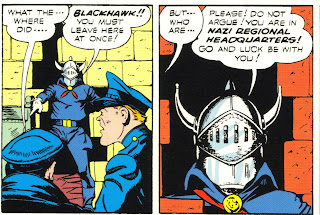 The warning, however, comes too late, and the two heroes are captured by the Nazis after putting up a good fight. That is, however, a kick ass helmet.

Blackhawk and Olaf are then taken to the commanding officer, General Von Ezel, and, in typical fashion, Blackhawk procedes to mouth off to the Ratzi bastard, revealing that he was warned by the Man in the Iron Mask. To prove what a badass he is, the general shoots one of his own men who failed to kill this mysterious threat. 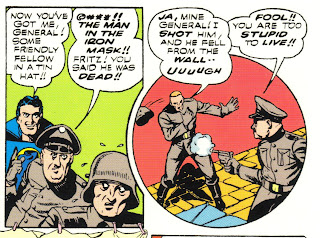 Seeing an in, Blackhawk starts teasing the general in a pretty cool panel layout by Cuidera, and then the general declares that Blackhawk will now get a whipping, which, again, happens in almost every story in this book. 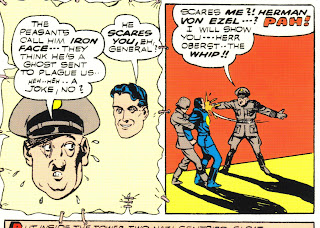 Meanwhile, the other Blackhawks are waiting around for their leader and teammate to return from their recon, when they are dropped into a pit by a rather elaborate Nazi trap.

And, while that's going on, Blackhawk takes his whipping like a man. 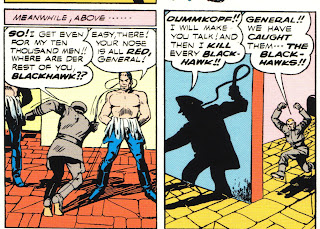 Blackhawk seems pretty immune to torture, since he must really be used to it by now, and so the general decides to go ahead and execute him. The firing squad, however, is interrupted when "Iron Face," as he is now known, cuts down a chandelier and knocks out the Nazis. Then, in a pretty cool panel sequence, Blackhawk and Olaf free their teammates from a pit of deadly water snakes that is slowly filling with water. 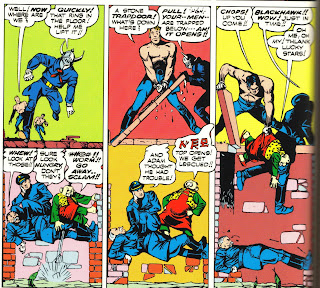 I love how Chuck's just chilling on Hendrickson's stomach here.

With the team reunited, the Blackhawks and Iron Face part company, but not before Iron Face says some French shit that let's everyone know who he is.

The Blackhawks, however, are a bit slow on the uptake, and they don't realize right away that Iron Face is really their lost comrade, Andre. So, when they go back for him, he has already been captured by the Nazis, who have devised a special torture for him.

I know they're Nazis and all, but this is a particularly douchy kind of torture, holding a dude down and banging his iron face helmet with a hammer. This gets shirtless Blackhawk to start punching. 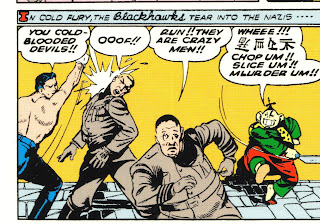 Also, Chop-Chop gets to start chopping up Nazis, and we really can't get enough of that.

Andre gets himself together enough to charge General Von Ezel, who then falls into his own snake pit. Next, Andre reveals the reason why he wears the mask: he was horribly disfigured in the avalanche. 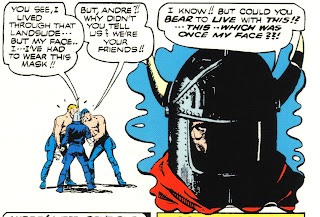 Cuidera does another great job here, only revealing a tiny portion of Andre's face, leaving the rest to our imagination.

With only one and a half pages left in the story, Blackhawk decides on a daring plan: to rescue Dr. Fritz Von Rath, the world's greatest plastic surgeon, from a Nazi concentration camp.

However, in a completely fucked up turn, the doctor is in no shape to help Andre. 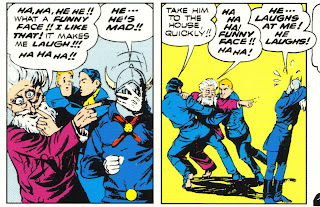 The story ends here, but it's continued in the next issue, and I have to say, things get even more fucked up when Blackhawk goes ahead and lets the batshit crazy doctor operate on Andre. But for that, you'll have to wait until next week, readers.

I do have to say, though, that these Golden Age Blackhawk stories are a blast. They are high adventure stories, and there's a clear sense of continuity from story to story. Also, Chuck Cuidera's art, out of the Will Eisner Shop, is pretty inventive, with some unique panel layouts, as you can see from some of the scans here. The influence of Eisner is obvious. Cuidera worked on the series from the first story in 1940 all the way to 1968, switching to inker over Dick Dillin's pencils when the series switched from Quality to DC, and it's one of those iron horse accomplishments that doesn't get much notice in the annals of comics history. There is also some fantastic art by the great Reed Crandall in the Blackhawk Archives, and I'll be covering some of those stories later as well.
Posted by Dr. K at 8:18 PM

My county courthouse appears to have tighter security than Nazi regional Headquarters. I guess that's what they get for occupying an old castle, though.

Shirtless Blackhawk bondage is not necessarily a bad thing.