The postwar popularity of the Blackhawks sort of confuses me. Comics audiences lost interest in most war-oriented series soon after World War II ended, but Blackhawk remained successful even beyond the demise of its first publisher, Quality Comics.

And it remained successful without evolving very much. The team still fought Orientalist villains and Nazis who survived the war and planned a return of the Reich. Not much later, they became cold warriors and stopped Communist insurgencies in real and fictional nations. And Chop-Chop remained a caricature that had to be offending someone by then.

In my Blackhawk research, I have not found much contemporaneous criticism of the series's politics or racial problems. The exception, though, is the parody of Blackhawk that appeared in Mad 5 (June-July 1953), "The Black and Blue Hawks!" drawn by Wally Wood, with writing credit not given (though I have seen Harvey Kurtzman credited at times). In the typical Mad fashion, this is a biting, hilarious parody which really nails the source's many problems.

To begin with, they parody the Blackhawks fight song: "Over land, over sea, we-ee fight for do-re-mi ... ha cha cha, we're Black and Blue Hawks!"

The team is introduced as Saddlesore (Chuck), Sauerbratten (Hendrickson), Yohnson (Olaf), and Chop Chop Chop. The latter might be the most insightful part of the parody. He's so small that he's in danger of being trampled on at all times, and instead of the usual broken English, he speaks like this: 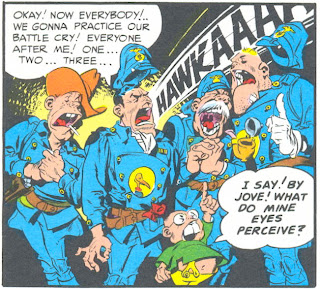 He's also the only competent member of the group. But despite that, he's given a wind-up toy named "H.M.S. Pinafore" as a plane.

After this introduction, Robespierre (Andre) crashes on the island, bringing news of a revolution in "Panazonia" with his last breath. From here on, the story effectively parodies the comics' tendency to show the team propping up third-world dictatorships.

Chop Chop Chop is always saving Black and Blue Hawk after the latter screws up in some way, leading to Chop Chop Chop actually carrying the oaf on his back after their plane crashes into the ocean: 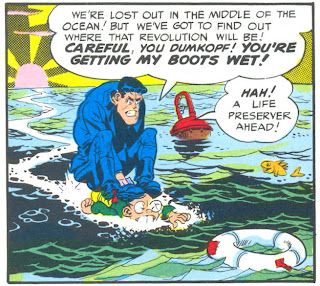 I love that Black and Blue Hawk slips into German here.

When they discover that only one life-preserver is available, the leader shows his true colors: 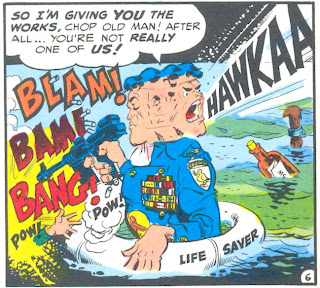 This is where the parody gets truly brutal. The line "You're not really one of us!" effectively encapsulates the entire treatment of Chop-Chop over the previous eleven years or so: despite his participation on the team, he is always treated as separate and different. It's hilarious, but like the best Mad parodies, it goes way beyond that, making an insightful and painful critique of the subject at hand.

This parody also gives the sense that there was also someone else out there who thought that Blackhawk was problematic, to say the least. Not only that, but the series was also popular enough to fall within the radar of the Mad creators and readers. Nonetheless, even this parody had little effect on the status quo at the Blackhawk series, and it would be a few years before Quality would even begin to change something like the appearance of Chop-Chop.

Special thanks to Mike Sterling of Mike Sterling's Progressive Ruin for help with the scans.
Posted by Dr. K at 10:24 AM