The Return of Blackhawk Wingsdays: Live!

First off, my apologies for the summer long gap in this blog. Right around the time I was planning on devoting more time to the blog, a bunch of stuff happened to take the wind out of my sails, and then some other projects took over my time. I did manage to put out a fairly regular movie column over at the Bureau Chiefs site, and now I'm ready to get back to some regular blogging a few times a week, if there is still anyone out there who is interested. I'm also on sabbatical this semester to work on a comics research project, so some of my posts coming up will be related to that work.

One of my accomplishments over the summer was to read a huge chunk of Blackhawk comics. I would venture to say that I've read most of the Blackhawk stories ever printed, though my research is a bit spotty from about issue 130 to 180. So, with that under my belt,and my batteries recharged, I'm going to make an exciting return to one of my favorite features: Blackhawk Wingsdays!

But if I'm going to make a comeback to this feature, I want to do it in a big way. Therefore, I'm going to be presenting Blackhawk Wingsday live this weekend!

Actually, this weekend I'm presenting a paper at the Purdue University Comparative Literature Conference, Graphic Engagements: The Politics of Comics and Animation. My paper, titled "Retcon and Race: The Many Faces of Chop-Chop from 1941-Present" (though the program gives the subtitle as "The Changing History of Chop-Chop, 1940-Present," it has since changed, partially to get the starting date right), will be like a more academic version of a long Blackhawk Wingsdays post, complete with tons of images but a bit more literary theory than I tend to use on the blog. So, if you are attending the conference, or are in the West Lafayette, IN, area on Saturday morning, come check it out!

I just want to say that I love the fact that I have a job where I can go to a conference and present a paper on Chop-Chop and the Blackhawks. My teenage self would hi-5 me so hard right now.

But because I know that most readers of this blog won't get to see this presentation, I want to share some of the stuff I will be discussing, especially since some of it is really nuts.

One of the things I became aware of while doing my Blackhawk research is that I really, genuinely enjoy the post-war Blackhawk stories, especially those drawn by Reed Crandall. Most of these stories are straight-up anti-Communist propaganda, with the team fighting off Communist rebellions in both real and fictional nations. And with 3 stories per issue at the time, the Blackhawks would often quell three revolutions in three separate fictional countries.

But the series also became a pretty solid adventure strip in a Milton Caniff mode, aided largely by Reed Crandall's dynamic, realistic art. It's a shame that DC hasn't reprinted any of this material: the early stories in the single Archives volume only catch the very beginning of Crandall's work on the strip, and the Showcase volume reprints the early DC issues, where the team had become a group of bland and generic crime-fighters. 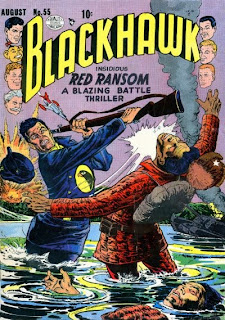 First of all, that is one dynamic cover!

In this story, we get a rare glimpse into Chop-Chop's private life. The Blackhawks travel to the U.S. in order to eat at the restaurant owned by Chop-Chop's cousin, Wah Jung. While there, they learn that Wah Jung has a problem: the Red Chinese government has sent him an unpaid tax bill charged to his father, Wah Po, who remains in China, where he runs a kite factory. The Reds threaten to imprison Wah Po if the "tax bill" is not paid.

The Blackhawks agree to help Wah Jung, letting Chop-Chop know, "You're one of us, Chop-Chop! We Blackhawks have to lend each other a hand!" So, the team heads to China, and Chop-Chop goes undercover to help break his uncle out of prison.

Not only is this the rare plot that takes the Blackhawks to a real, rather than fictional, country, the story also has something interesting going on visually. Here's an early page from the story: 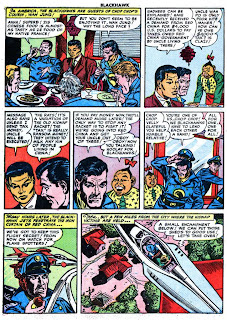 I find it curious how Crandall depicts Wah Jung in his normal, realistic style, while Chop-Chop remains a heavily caricatured figure. If anything, the contrast makes the caricature even more grotesque, as this cartoonish figure clearly doesn't belong with the rest of the strip, despite Blackhawk's assertion that Chop-Chop is "one of us."

And when Chop-Chop works undercover to infiltrate the prison, the Chinese soldiers seem to think he's some kind of imbecile: 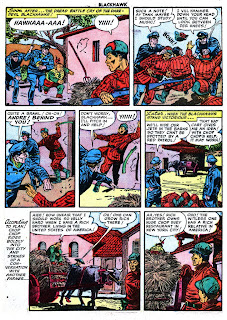 This sort of contrast between realism and caricature in the depiction of Asian characters within the same story occurs frequently in Blackhawk stories of this era, especially as the team engages in East Asian conflicts. It would still be a few years, though, before Chop-Chop's appearance would change in order to reduce, but not eliminate, the caricatured elements.

"Red Ransom," however, is particularly sensitive despite it's overt anti-Communist propaganda. Once the Blackhawks free Wah Po, they learn about the existence of a nearby weapons factory. Wah Po can signal the team from the ground so the Blackhawks can launch an airstrike, but Chop-Chop's uncle must sacrifice himself in the process. The team flies away from the mission with tears in their eyes.

Unfortunately, that sensitivity is undermined by the awkward placement of the Chop-Chop solo story in this issue, where Chop-Chop inherits a worthless fortune from a dead relative, and hijinx ensue.

I've got plenty of material for future installments of Blackhawk Wingsdays, and my research has yielded some other stuff that I'll work into the blog as well. Before I go, though, I want to give a much belated thanks to Tom Katers for plugging this blog on his fabulous podcast, Tom vs. The Flash. Unfortunately, there wasn't much of a blog to plug at the time, but I appreciate the shout-out, anyway.
Posted by Dr. K at 7:09 AM

It's great to have you back blogging...and on such a strong (and fascinating) note.

In addition to the visual contrast, the difference between Wah Jung's dialogue and Chop Chop's is also pretty jarring. While Wah Jung's speech pattern is still somewhat stereotypical (e.g., omitting the word "the"), at least they weren't constantly switching "r" and "l," like they did with Chop Chop.

Just came across your very interesting Blackhawk posts - one of my favourite comics and characters from 40 years ago.

I'd like to see your paper on Chop-Chop - is it available? Thanks.

BH #55 is my choice for the most dramatic comic cover EVER. A bit violent and perhaps jingoistic by today;s perpsective but an absolutely splendid piece of art all the way-- design, drawing, rendering, everything. The last two or three years of Crandall's run on that tile was magnificent. The writing was top-notch as well. Some of the best comics ever produced.