Spider-Man: Turn On the Dr. K! 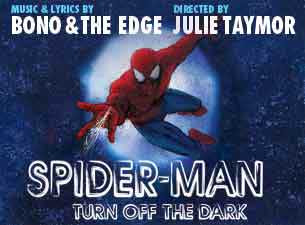 On a recent spring break trip to New York, The Other Dr. K and I saw the Spider-Man musical, on the same night that producers announced they were delaying the opening again, and the next day we learned that director Julie Taymor was leaving the show. The postponement was announced just before the curtain went up, so we didn't hear about it until after the show.

I'm glad I saw it, especially since it may never actually open now, or at least the version that will open will be dramatically different from the one we saw. But, overall, I enjoyed the experience, and I think the show's strengths far outweigh its weaknesses. That being said, I also understand much of the harsh criticism it's received, though I do think that a lot of the negative press has involved a combination of schadenfreude, snark, and pile-on in order to create a story about the "biggest flop ever."

Anyway, for what it's worth, here are my thoughts on the musical. Just to warn you, this is going to get pretty long and spoiler-filled, though that may not matter much. 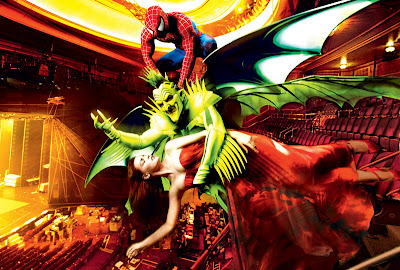 First, Spider-Man: Turn Off the Dark definitely sounds like a musical that was written by U2. Since I tend to like U2, that wasn't a problem for me.

Second, the technical stuff is amazing, especially the stunts, and that does a lot to overcome the weaknesses, which are mainly in the second act's plot.

Third, the audience really got into it, and they showed an enormous amount of good will, even when a technical problem stopped the play for a bit with the Green Goblin suspended above the audience. The production had worked out a system for the likely event of a technical stoppage like this: after a short announcement about the priority of safety, the suspended Green Goblin did some mugging and clawing for the crowd, and the Spider-Man who was waiting on him from the top balcony waved him off in disgust. The people underneath the Goblin seemed a little concerned, but otherwise the crowd seemed to dig it.

The first act is actually pretty great, and this surprised me considering how overwhelmingly negative the reviews have been. It tells a complete story on its own. One problem is that it's a familiar story--pretty much the plot of the first Spider-Man movie. However, there is some amazing stuff in there. The number where Peter discovers his powers in his room is really cool: stagehands carry out four padded walls, and Peter bounces off of all of them, sticks to the ceiling, and runs 360 degrees from floor to ceiling and down again. Also, the wrestling scene where Peter first earns money from his powers is pretty hilarious, with Peter fighting a giant, inflatable opponent. Many of the early fight scenes also use some neat slow motion effects, where Peter dodges a baseball that's been hit at him and then takes down two bullies with their bat.

Also, the play makes one particularly big change to the Spider-Man origin: Uncle Ben is run over when a thief steals Flash Thompson's hot rod. This, however, makes some sense, because we can understand there why Peter would let such a thing happen.

The most amazing stunts in the entire play also take place in the first act, during the final battle between Spider-Man and the Green Goblin. Spidey actually jumps off the third level balcony onto the flying Green Goblin's back, which is incredible. The act ends with the Green Goblin falling off the Chrysler Buidling, and the way the scene is staged, in which we are meant to be looking down from the top of the building, is impressive.

But herein lies what I think is the biggest problem: act one ends with the play's emotional high point, and the rest of the play doesn't even come close to this. They could just add a few more scenes to act one and make it the entire play, and then it would be great. Also, Patrick Page, who plays Norman Osborn/The Green Goblin, is fantastic, and none of the villains in the rest of the play come close to being as straight-up fun as he is.

There is also the thing with the "Geek Chorus," which wasn't as annoying to me as I thought it would be when I first heard about it. The first act is framed by four comic fans trying to compose their own Spider-Man story, which is the play we see. However, this conceit is pretty much dropped somewhere early in the second act, so it doesn't really pay off like it should.

When act one ended, the Other Dr. K and I looked at each other and said, "That was pretty good. I wonder what all the complaining was about?" I was even a little exhausted from the final fight scene.

In terms of story, though, act two is a mess. Early in act one, the geek chorus introduces the myth of Arachne, and she is supposed to serve as some kind of mythical/storytelling force that connects Spider-Man to classical mythology. That makes sense, and it works on that level. In fact, Arachne could serve as the play's narrator, dropping the geek chorus entirely, and that would further reinforce an interesting comic/classic mythology connection. This would especially work because Arachne is not a very mobile character--she's got a woman's torso and a spider's body--and she spends most of her time on stage suspended in the air.

However, the geeks turn her into the main villain in the second act, and this is presents another significant problem. Arachne's motivation is jealousy over Peter's relationship with Mary Jane--she wants Peter to embrace his spider side and reject his humanity. After defeating a bunch of villains, Peter decides to quit being Spider-Man, as it has ruined his personal life. In order to get Spider-Man back, Arachne creates a global threat that only he can defeat: she shuts down the world's power supply and takes over the internet and all other broadcast media. Then, she brings back the villains Spider-Man has already defeated in order to sow chaos and destruction.

We find out, during the climactic battle between Spider-Man and Arachne, that she has created all this chaos and destruction virtually: she's been controlling the information on the internet and television to make it look like the villains have returned and were destroying the major cities of the world. This doesn't make sense, because we see Spider-Man fighting these villains again, though he is punching them as they appear on giant screens. Also, Arachne traps Mary Jane in a web at the end, in a final effort to get Peter to give up his humanity and embrace his spider-ness. When he agrees to do this if she only releases Mary Jane, Arachne realizes that she can never get him to stop being human, so she abruptly gives up, which doesn't make any sense. Then Peter kisses her and sends her away. At least, that's what I think happens--the Other Dr. K and I had some disagreements about they play's conclusion.

Still, the final song, "Boy Falling from the Sky," is really good, and the number is very physically demanding on Reeve Carney. He has to sprint on a treadmill for a big part of the song, and then swing around the theater several times before landing on the third balcony. Then, he returns for the encore by being lowered onto the stage upside down for the final kiss with Mary Jane.

It's clear that the second act is where most of the money is, and it contains the stuff in which Julie Taymor was probably the most invested. The infamous shoe-shopping number with Arachne and her female spider minions is as ridiculous as everyone has said it is, but it's also one of the more technically ambitious numbers:the female spider costumes alone are really complicated and obviously expensive.

So, it seems pretty clear where the problems are, but they are in the areas where one can really see Julie Taymor's signature: elaborate costumes, complex musical numbers, innovative technology. Still, whenever the flying and web-swinging happened, I was blown away, and that made it easier for me to overlook the plays bigger problems. Also, I don't have a lot invested in Spider-Man's origin or overall story, so it was easy for me to forgive some of the liberties taken there. I'm glad I saw it, and I had a good time with the experience. I'd also be curious to see it again when changes are made and if it actually returns in the summer.
Posted by Dr. K at 1:14 PM

Labels: Spider-Man, Turn Off the Dark