I'll be posting a bunch of reviews in the coming days as I work my way through some of the stuff I picked up at HeroesCon. One of the first comics I read from the show is Corinna Sara Bechko and Gabriel Hardman's horror graphic novel from Image's Shadowline imprint, Heathentown. I picked this book up on the first day, after having a nice chat with Gabriel Hardman about his fantastic work on Marvel's Agents of Atlas. I read it that night in the hotel room and found it difficult to put down.

I'm a sucker for horror stories where a good-natured stranger comes to a small town and manages to inadvertantly uncover that town's secrets. Here, Anna Romano, a grad student doing field research in Chad, accompanies the body of her friend, Kit Durrel, back to a small town in Florida after Kit is horribly murdered in the African village where they are both studying. 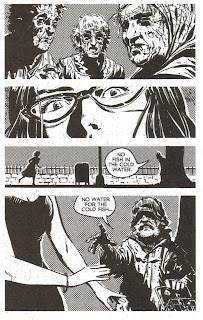 When Anna arrives in town, strange things start to happen, as they are wont to do in this kind of story. But the secret this town hides is particularly creepy and unsettling, especially as rendered by Hardman in a black and white style akin to 70s Warren horror comics (Hardman's style here is a fusion of Bernie Wrightson and Tony DeZuniga, though I would say that the latter's style tends to dominate). 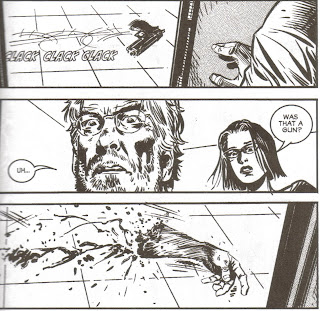 Bechko handles this exposition quickly and efficiently, as Anna reveals her experiences to her public defender after she is arrested for digging up Kit's grave. Once that's dispatched, the story moves forward with a relentless pace up to the very end. Anna has to remain in motion almost constantly in order to escape her persuers, so information about the town and its secret are revealed to her in quick bursts, and to us in large, often silent panels. It's been a long time since I've read a horror comic that was this effective at building a genuine sense of unstoppable terror--I'd have to go back to Alan Moore's "Sleep of Reason" story in Swamp Thing for something with a similar visceral impact. This is a pure, classic horror comic, and I'm glad I picked it up. I hope Bechko and Hardman continue to produce more graphic novels in this vein.
Posted by Dr. K at 4:50 PM