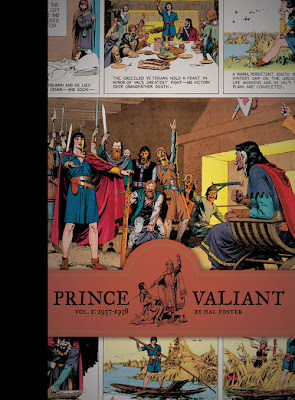 When I was a kid, I used to devour the Sunday funnies, but I always skipped over Prince Valiant, mainly because it was just too "prosey" in the odd way it combined text and image, and it defied my rather rigid juvenile sensibilities about what defined a comic strip. While I acknowledged that nothing on the comics page looked quite like it, or had the same sophisticated level of art, but it just took too much longer to read than the other strips, and I had things to do.

Even as I grew older and more sophisticated, and I would read praise of Hal Foster's Prince Valiant as a pinnacle of the comics art form, I still stuck to my childhood prejudice against the strip.

I don't know if there is much value in reviewing Prince Valiant more than 70 years after it began, but Fantagraphic's new edition of the oft-reprinted series is a revelation. Not only does the story hold up as a sophisticated Arthurian adventure tale, but the color reproductions of the strips themselves are immaculate. Plus, the book is huge, and like Fantagraphics' Popeye and Krazy Kat reprints, it challenges the height of most of my bookshelves.

Two things in particular strike me as interesting and notable about Prince Valiant. First is the development of Prince Valiant as a resourceful hero. Reading these two years' worth of strips in one sitting, I especially enjoyed seeing how the young prince and squire learns skills in his early adventures that will later serve him as a knight, especially his unconventional fighting style and his ability to manufacture weapons from various materials.

Another element that struck me while reading through this collection is the pacing. There are absolutely no breaks between adventures; instead, one flows into the other in such a way that makes the series read like a single, constant, and unending story. (Though I'm not familiar with the history of serial comic strips, I don't recall others that lack clear breaks between stories.) Very early in the series, Val visits an old witch, Horrit, who gives him a prophecy about his future. She predicts that he will have a life of high adventure and world travel in the court of King Arthur, but he will never find happiness or contentment. This prophecy clearly drives the rest of the series, as Val frequently refers back to it whenever the possibility of a peaceful life emerges. It also informs the ongoing nature of Val's adventures, giving the reader specific story points to anticipate while also giving Foster an overarching plot that could go (and has gone) on indefinitely. It's fascinating to read this series from its beginning and to see how the seeds were planted for more than 70 years of adventures. However, this also means that the first volume ends just as a new adventure begins, with Val rushing to Camelot to warn Arthur of the coming Saxon invasion.

In addition to the fact that this is a beautiful book, it also features some useful biographical, textual, and historical information, including an essay on the creator's life by Foster scholar Brian Kane, a reprint of a 1969 interview with Foster, and a comparison of various Valiant reprints by Kim Thompson.

I don't know how many readers there are out there who, like me, have avoided Hal Foster's Prince Valiant for whatever reason, so all I'm saying here may be obvious to anyone who has read one of the many reprints of this series over the years. However, like Fantagraphics' reprints of other classic comic strips, I'm happy to have this beautifulnew edition in my comics library.
Posted by Dr. K at 8:44 PM

My hometown newspaper, the Fargo Forum, didn't carry Prince Valiant. As a kid, I only read it once every couple of months, in the Minneapolis Star and/or Tribune.

Wow, this completely echoes my own childhood attitudes toward Prince Valiant. I have the Popeye reprints, and I love 'em. I may have to pick up Prince Valiant as well!

Mike--But the Forum ran HENRY long after the creator was dead and no longer producing new strips, so you did have that.