The Gil Kane Punch of the Week 25: It's Growed Onto My Skin!

This week's punch comes from the "Outlaw" feature that ran in DC's All-Star Western between 1970 and 1971. The series was written by Bob Kanigher (and later by John Albano) and drawn by some great artists, including Tony DeZuniga, Jim Aparo, and Gil Kane. This particular punch comes from "Death Deals the Cards!" originally published in All-Star Western 3 (Dec. 1970-Jan. 1971) and reprinted in Showcase Presents Jonah Hex. 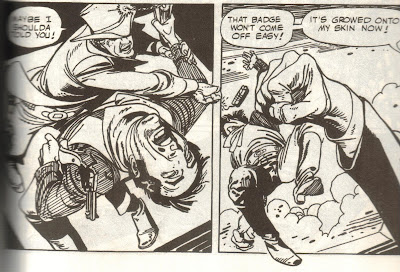 The second punch here is a variation on Kane's normal combination, but I like how he changes the camera angle in the transition between the panels, giving the reader a kind of "punch/reverse-punch" combination.
Posted by Dr. K at 8:12 PM