The Gil Kane Punch of the Week 29: The Mightiest Haymaker of His Career!

For the final punch of 2009 (but, by no means, the final Gil Kane punch), I wanted to include something special. So, here's one of those rare and glorious moments: a full-page Gil Kane punch, from the story "Hunt for a Robin-Killer" in Detective Comics 374 (Apr. 1968; reprinted in Showcase Presents Batman Vol. 4), inked by Sid Greene. 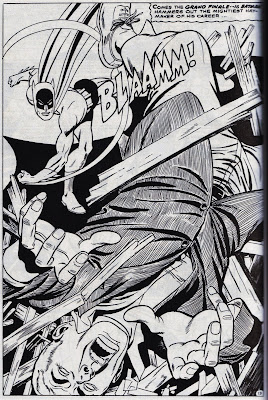 What makes this special, however, is not just the fact that it's a full-page Gil Kane punch, but also the hyperbole of writer Gardner Fox's caption for the panel. This isn't any old punch: this is "the mightiest haymaker of his career." Now, Batman has delivered a lot of punches in his career as a crimefighter. If we try to imagine for a moment what the mightiest haymaker Batman ever threw would be like, that imaginative activity would be the superhero equivalent of trying to imagine the number of angels that could dance on the head of a pin or a rock that God could create that would be too heavy for Him to lift. And who better to depict this mightiest punch than Gil Kane? (Well, maybe Jim Aparo, but that's for another series.)

But if anyone deserves to be on the receiving end of the mightiest haymaker of Batman's career, it's this guy, Jim Conders, a prize-fighter who set a trap that put Robin in the hospital. Conders then used his identical twin brother, Ed, to establish an alibi for himself and threatened to sue Batman for assault and false arrest. So, as you can imagine, this guy needed some big punching.

I hope you all have a Happy New Year. And, as Santa was kind enough to provide even more material for the Gil Kane Punch of the Week, you can rest assured that I resolve to continue providing Gil Kane Punches on into 2010!
Posted by Dr. K at 7:59 AM

I can't believe I just clicked a hyperlink in a piece of spam. I will hang my head in shame.

well, as all my internet buddies are so very fond of saying. . .