The Gil Kane Punch of the Week 28: My Presence Has Been Announced! 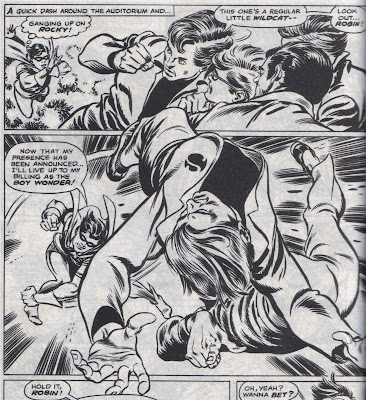 During this period, Robin had a backup series in Detective, usually alternating with Batgirl. In this particular story, young Dick Grayson and his intrepid colleagues at the Gotham High Owl uncover some corruption involving a new school annex and a teachers' strike. The bullies that Robin takes out are really mob enforcers disguised as a gang from a rival high school, but Robin sees through their disguise due to the gang's suspicious ability to grow facial hair.

This story is pretty punch-a-rific, so you'll probably see it come up again in a future entry.
Posted by Dr. K at 9:38 AM