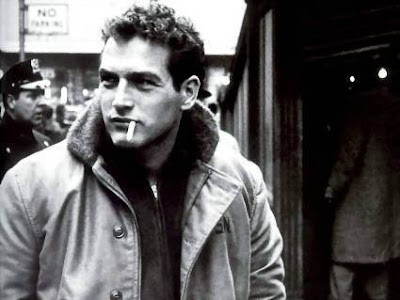 This was a tough loss over the weekend. Paul Newman put together 50+ years of solid film performances, and it's difficult to imagine another actor who made such great choices over such a long career.

When Newman began his film career, he was lumped in with the other young method actors of the period, drawing comparisons to Brando, James Dean, and Montgomery Clift. And if you ever see Newman and the boxer Rocky Graziano in Somebody Up There Likes Me, you can see why that comparison was apt (This is definitely one of my favorite boxing movies, and right up there among my favorite sports movies in general). However, he lacked the tragic qualities of Dean and Clift--and the eccentricities of Brando. Instead, the thing he managed to do well, moreso than any other actor I can think of, is play some thoroughly unlikeable characters and still make them compelling and utterly charming. His character, Private Detective Lew Harper (based on Ross Macdonald's Lew Archer), says, "Only cream and bastards rise," in the underrated late noir Harper, and the same could be said about a lot of the characters Newman played over the years. Billy the Kid in The Left-Handed Gun, Fast Eddie Felson, Hud Bannon, Cool Hand Luke, Reg Dunlop in Slap Shot, Frank Galvin in The Verdict, Sully Sullivan in Nobody's Fool--none of these would be people I would care to know in real life, but all are fascinating characters when rendered on-screen by Newman. We may or may not root for Fast Eddie Felson to beat Minnesota Fats in The Hustler, but Newman makes it hard for us to do so, and when he says, in the first meeting with Fats, "even if you beat me, I'm still the best," it's far from triumphant. 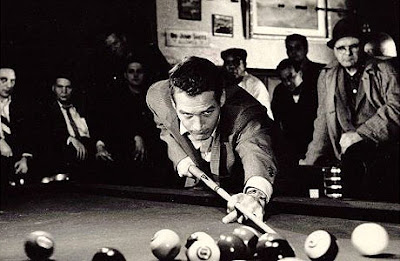 While Cool Hand Luke should be required viewing for entry into the human race, my favorite Paul Newman movie is Hud, which I re-watched over the weekend. Hud is where Newman's balancing act is at its most delicate. Hud Bannon is thoroughly unlikeable--he treats everyone around him like crap, and he publicly flaunts his rejection of morality and decent standards of behavior. I love the way the character is introduced in the film: Hud's nephew, Lonnie (played by Brandon De Wilde), searches through town for his uncle early in the morning and follows a path of destruction that Hud left the night before. Lonnie finally tracks Hud down to the house of a married woman, just has her husband pulls up. Hud quickly explains that he found his nephew coming out of the house, and we immediately understand what kind of man we're dealing with. Hud is a force of nature that threatens to consume everyone around him ("No one gets out of life alive," he tells Lonnie), and it always amazes me that Newman, at that point in his career where his star was on the rise, would choose such an unredemptive and nihilistic role (and on a side note, I love that Brandon De Wilde, who ten years earlier had cried for Shane to come back, is the one that leaves in the end here. This is more than a perfect ending--it's the perfect transitional moment in film history.). 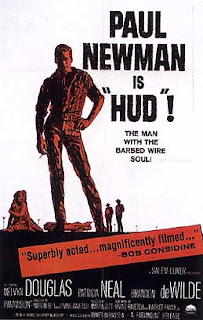 Despite the fact that he played total bastards so well, Newman's public life served as a model for exactly how a celebrity should behave, especially through his charitable work with the "Newman's Own" brand. Looking back on his career, and the string of great performances he had in every decade of the last half-century, it would be difficult to find a better American actor.
Posted by Dr. K at 11:04 AM

I linked to this post because it is far better written than my own thoughts on the matter.

Thank you for it.

Your remark about viewing Cool Hand Luke as prerequisite to humanity redeems you, fully and at last, for the nonsensical defense of Breaking the Waves all those years ago. It is right to give you thanks and praise.

Aw man, I never knew the kid in Hud was the same tyke who yelled "Shane, come back!"

This fact has enriched my life in ways I cannot explain.

As for Newman, I always thought it was a shame that he was given an Oscar for the lame "Color of Money" instead of the many legitimate classics he starred in and brought so much to.

it's hard not to admire Paul Newman for putting his money to work in such productive ways, such as his Newman's Own line--high quality stuff and the proceeds go to good causes... very smart.