Reader werehawk pointed out something that I missed in the solicitations for DC's December releases: 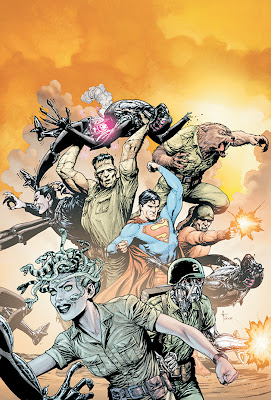 The Creature Commandos are coming back, along with J.A.K.E.-2--the G.I. Robot!

According to the solicitation copy for Action Comics 872, Superman finds the original Creature Commandos and their robot buddy held captive on board Brainiac's ship. This may mean that Brainiac found the WWII-era misfit heroes somewhere in outer space, which, in turn, may mean that this story, which I covered during last year's Halloween Countdown, is in continuity.

If so, then I hope writer Geoff Johns references the fact that Robert Kanigher was on board the rocket, too.

And speaking of the Halloween Countdown, I'm gearing up for another during October. So, posting is going to be light for the next two weeks as I prepare material for another 30 days of horror comics and films!
Posted by Dr. K at 2:58 PM

G.I. Robot's been enjoying godhood in The War That Time Forgot recently. It still didn't help me want to read it past the 4th issue.