Some time in 2003, after the war in Iraq had been underway for a while, I got a call from a producer for a talk radio show asking me if I would be interested in doing an hour on the current state of war movies. It turns out, whatever set of search terms the producer used in Google turned up my home page and an essay that I wrote on the history of war movies. I hastily agreed.

During the interview, the host asked me why there weren't any war movies being made at that time about the Iraq War. I explained that it would be unlikely that any would be made so early in the war, and that, with the Vietnam War, filmmakers did not start to represent that war until years after it was over. What we would more than likely see, instead, was films about past wars that would serve as analogies for the current attitude toward war in general, as is what happened in the early years of Vietnam. (My prediction proved to be only partially true, as we have seen quite a few movies about the current Iraq War surface over the last few years.)

The interview closed with the question, "What is your favorite war movie?" My answer, pretty quickly, was Patton (1969). I then explained that I admire Patton for its complexity and moral ambiguity that provide a more realistic, and less jingoistic, picture of war. I also went on to mention movies like The Great Escape, The Dirty Dozen, and Apocalypse Now.

However, another movie that I could have discussed, which shares many of the same qualities I admire in Patton, is Play Dirty (1968), starring Michael Caine and directed by Andre de Toth. 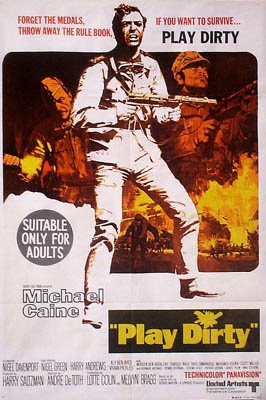 Like Patton, Play Dirty also deals with the North African campaign during World War II--specifically, a plot to blow up Rommel's fuel supply 400 miles behind the German lines.

The film opens with a scene reminiscent of the opening of Billy Wilder's Five Graves to Cairo, a movie starring Erich von Stroheim as Rommel that is criminally not available on DVD. Wilder's film opens with a tank filled with a dead crew careening through the desert (one of the best openings to a war movie ever), and Play Dirty begins with a jeep, containing a corpse in the passenger seat, speeding through German territory on its way to a British desert base (The radio on the jeep blares "You Are My Sunshine" in a nice bit of irony that sets the tone for the rest of the movie).

The jeep is driven by Captain Leech (Nigel Davenport), the only survivor of an excursion behind German lines to find information on Rommel's supply lines. Leech reports to Colonel Masters (Nigel Green), an eccentric commanding officer who is trying to use his knowledge of military history to form a plan to defeat Rommel. Masters's plan is to send a small demolition team through the desert in order to sneak up on Rommel's fuel supply and destroy it. Masters's superior agrees to the plan, though he decides to use Masters's team as a decoy while sending out a larger force, for whom he will take credit, of course.

Masters is unfortunately short of men, as all but Leech have been killed in various recon missions. He then sends out a request for a new officer, one who "knows something about petrol." He gets Captain Douglas (Michael Caine), a BP executive assigned to the British army to oversee fuel shipments. He's not equipped to lead such a mission, but the superiors have little care for such things, as they know in advance that the mission is doomed to failure.

Douglas is put in charge of a Dirty-Dozen-like group of North Africa ex-criminals and castoffs who have been enlisted in the British army. Also included is Leech, who bristles at the idea of serving under Douglas but agrees to return Douglas alive in exchange for 2,000 pounds from Masters.

Much of the film's tension comes in the power struggle between Leech and Douglas. The cynical, amoral Leech knows the desert and is mercenarily commited to the mission only, while Douglas balks at any challenge to his authority, despite the fact that he may not be well-suited for leading this mission. (Richard Harris was originally cast as Leech, but he was fired just as production began, and Davenport was "promoted" from a smaller supporting role to the larger role. While Davenport is great in the role, I can only imagine just how fantastic this movie would be with Harris and Caine going at each other.)

The middle part of the movie consists of extended vignettes that involve various challenges the group faces as they try to cross the desert. Many of these scenes are long and dialogue-free, with intense attention to detail. For example, early in the mission, Douglas decides to haul the group's three vehicles up the side of a steep hill using a makeshift pulley system, rather than turning back and heading into an oncoming enemy patrol. Andre de Toth takes us step-by-step through this process, which has the effect of racheting up the film's tension. Subsequent scenes involving desert sandstorms, flat tires, and land mines only further increase the tension.

Andre de Toth was known primarily for his Westerns and noir films in the 40s and 50s, and his movies featured a tough but oddly casual and amoral approach to violence, especially in films like Crime Wave, Springfield Rifle, Hidden Fear, and Ramrod. Violence, in de Toth's films, is a natural male activity, and is, therefore, treated in a rather banal fashion. That approach is also effectively on display here, with disturbing results. A small mistake by Douglas early in the film results in a massacre, and Leech later coldly chooses to do nothing when he sees a group of British soldiers about to get ambushed. Later in the film, the group steals a Red Cross van in order to move freely on a German supply road. While riding in the front, Douglas hears a crash in the back and, looking through the sliding window, declares, "It's only a nurse." Whatever violence that occurs in the back is beneath his notice, and it's beneath ours, too, as we don't get to see what is happening to the unfortunate nurse (however, what happens to the nurse later serves as one of the more disturbing and unsettling elements of the film).

The rest of the movie plays out like a series of repeated punches to the gut, making this one of the most nihilistic, morally ambiguous war movies, which is why it's at the top of my list for that genre. And for Michael Caine, it fits well with the types of roles he was choosing in the 60s and early 70s, like in the Harry Palmer films, Alfie, Zulu, The Italian Job, Get Carter, Pulp, etc.: complex characters who could very often be bastards, but Caine's charm and intensity always kept the audience on their sides. Forty years on, Play Dirty still has the power to shock, and it definitely deserves to be more well known than it is.
Posted by Dr. K at 12:20 AM

Great choices you made. Man, you've inspired me to see Play Dirty again. I saw it ages ago. Not sure why I've never had any repeat viewings of it. Caine did a lot of really good work during this era.

I'm putting it on my netflix list and trusting you on this one.