Sometimes, I can't help myself...

I was skimming through some coverless comics from the 40s and 50s that I have in my collection, and I came across this story, from Ozark Ike 25, a baseball comic published by Standard Comics in 1952: 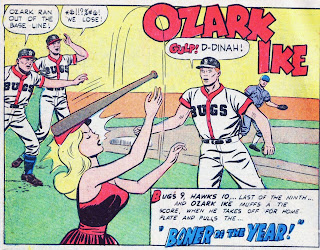 That never stops being funny. Of course, nowadays, you could get arrested for reading that caption box aloud to a minor.

Now, before you say, "But Dr. K, you're an educated person--you have to understand that these were more innocent times, and that word had a different meaning then," I would like to point out some other parts of the story that may point to a more modern connotation.

As the story begins, something awakens Ozark Ike McBatt from a deep, sound sleep--the thought of his girlfriend, Dinah Fatfield, in a new Bat-Girl outfit: 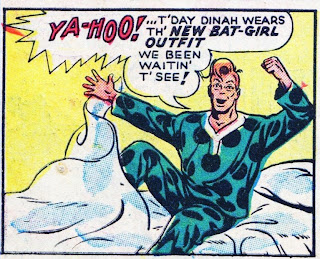 Hmmm. What sort of Bat-Girl outfit could cause such excitement and enthusiasm?

Probably not this one: 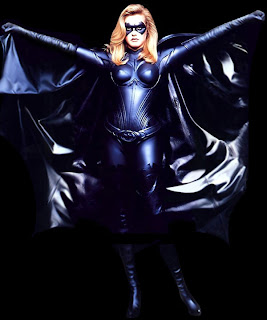 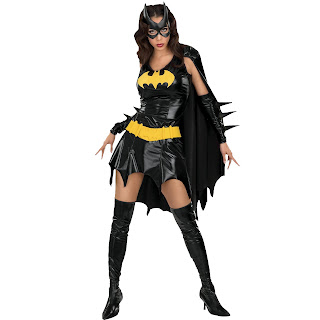 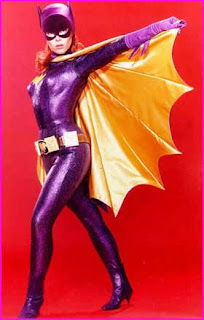 Actually, it's this one, revealed in a panel that lays out horizontally across the page:

So, just to be clear, in the story called "Boner of the Year!" Ike wakes himself up from a deep sleep thinking about his girlfriend in her new Bat-Girl outfit. In a scene not depicted in the story, Ike takes 30 minutes to pee that morning.

During the game with the Hawks, Ike's team--the Bugs--falls behind, but with two outs in the 9th, Ike represents the tying run on 3rd base. When a hit goes into left field, Ike takes off for home, but Dinah becomes so excited, that she has an accident: 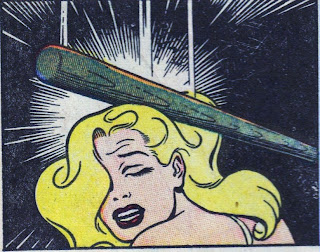 Man, Jaime Hernandez could have drawn that panel. But the context would be completely different.

Anyway, Dinah hits herself in the head with a bat (a bat with "Ozark Ike" written down the shaft, by the way), and Ike runs out of the baseline to make sure she's okay, but in the process, he loses the game for the Bugs, or "muffs a tie score," if you will.

You know, with this being a baseball story and all, I thought about making double entendres about balls and long, hard, cylindrical pieces of wood, but, really, I try to run a classy joint here. Some restraint is necessary.

Back in 2003, Scott Shaw! covered this issue in his Oddball Comics column. Check here if you want more background on this issue and on Ozark Ike in general.
Posted by Dr. K at 9:29 PM

Jeez, Dinah and Ike don't even look like they were drawn by the same person. It's pretty clear where the focus was here.