The following scene appeared in last month's Justice League of America 26, written by Dwayne McDuffie and drawn by Ed Benes: 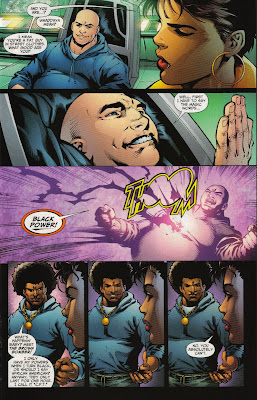 This scene made me laugh, especially the line about "CPT" and Vixen's delayed reaction. In just one page, McDuffie throws in to this comic a gutsy satire of race in superhero comics--something he's done very well elsewhere and something I wish he'd do more in this series (perhaps the return of the Milestone characters in the latest issue will provide such an opportunity).

It also serves as a nice little easter egg for readers with some knowledge of DC Comics' problematic history with multicultural superheroes. Brian Hughes at Again with the Comics has a detailed explanation of how the Brown Bomber fits into that particular history, which makes McDuffie's inclusion (and editorial's approval) of the character even more amazing.

The Brown Bomber doesn't do much else in the comic, and his appearance in an alternate universe created only to test Vixen probably means that we won't be seeing him again in the future. That may be for the best. But there is also an edge here that McDuffie hasn't shown in this series before, and now that most of the loose plot threads left over by other writers are resolved, I hope that we'll see McDuffie cut loose some more.
Posted by Dr. K at 7:08 PM

Love the concept. If DC gave me the reigns to the character I'd make him as popular as Deapool with a decent origin story to boot.