The Return of Ask Dr. K!

Back in October, I received an email from a concerned parent who was hoping that, with my extensive expertise in the subject of superheroes, that I could help answer some of her 4-year-old's questions about the diets and basic personalities of Spider-Man and Superman. That email turned into this post, which has proven to be this blog's most popular post that doesn't deal with Chop-Chop or the Creature Commandos.

Several follow-up questions ensued to help clarify some of my answers. For one, I had to correct my own error when I left out Spider-Man's love of wheatcakes, a mistake upon which dozens of readers rightfully pounced and to whom I will be endlessly grateful.

I also had to support some claims that the 4-year-old met with skepticism. For one, the youngster did not believe that Superman would eat rocks, though he seemed to have no problem with Superman eating nuclear waste, hot lava, solid steel, or the sun (now that I think of it, perhaps his objection was to Superman eating rocks raw, rather than in their heated, liquid form). So, in order to prove the child wrong, I sent him this particular image: 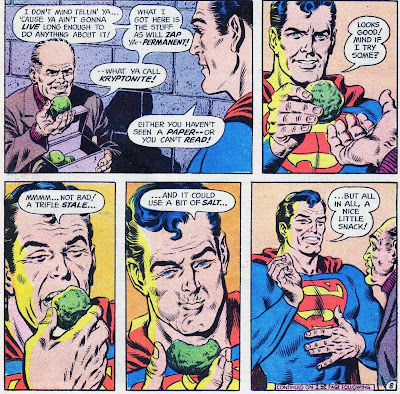 That taught him never to doubt me again. Pwned!

With Christmas just around the corner, I received another timely message from the same concerned parent, hoping that I can answer some more questions that her inquisitive child has.

Some weeks ago, I wrote in with some questions my four-year-old had about superheroes whose personalities and preferences I know little. Your responses were, overall, very helpful, and I read all of them to my son and showed him the strip you provided of Superman eating rocks as an illustration of the food preferences you so helpfully provided. Were Superman, rather than Santa Claus, coming in just ten short days, we'd be ready with his treeside snack.

But as is often the case, questions lead to more questions, and some of them I cannot answer without your help, so I am, again, imposing on your expertise. First, while scrolling through your blog with said son, he asked me repeatedly, "Zat Batman?" and when I had to reply honestly with a "no," he asked, "Why?" So I guess the question is, "Why isn't ________man Batman when he definitely isn't Batman?"

But to answer the question, no one is as awesome as Batman. And to be even more succinct, use this question as a test: "Could _________ beat up a flaming bear and then ride it off a cliff?" 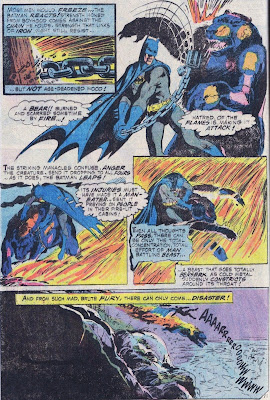 The answer, more than likely, would be "No." You may be tempted to lie and say that Daddy could also do this, but that lie might ultimately bite you in the ass when you're family is attacked by a flaming bear.

Next, I have a new set of explanatory challenges thanks to some comic books I brought home from Nashville a month ago. The books were recommended by someone who knows Dr. K's work well, and so I was eager to return home and share them with my preschooler. Lo and behold, with every frame, the boy asked, "He a bad guy?" or "Zat a bad guy?" At first, I thought he was having trouble telling the good guys and bad guys apart, but I think the confusion goes beyond that: I think he's also asking whether everyone is a bad guy or not, which probes philosophical issues I'm unprepared to address without consulting you first. Is everyone a bad guy in general? I could answer that in different circumstances, but I'm not at all confident about the matter within the cosmology of the superhero world, especially after all those ugly things you reported about Spider-Man and the devil. Please advise.

If your child is going to develop a life-long comics reading habit--which I hope he does--then the question about who is and is not a bad guy will become more and more pertinent though simultaneously confusing, because at one point or another, every superhero becomes a villain (and often vice versa, too).

For example, say your child takes great enjoyment in Jeff Smith's fantastic, all-ages graphic novel Shazam! The Monster Society of Evil (which makes a great holiday gift) and in Mike Kunkel's fantastic Billy Batson and the Magic of Shazam! comic series. And say your child takes a special liking to Captain Marvel's spunky kid sister, Mary Marvel. So, you decide to head off to the local comic store to find that character's most current appearance in order to keep your child up-to-date with the constantly changing world of his favorite comics, and this is what you find: 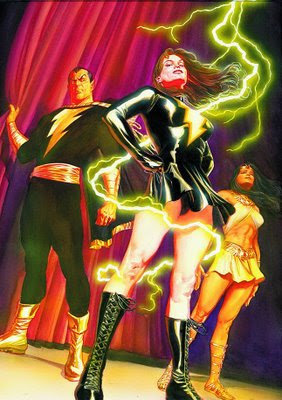 Then, you will have to explain that Mary Marvel is now a villain, and not the cute, spunky, heroic character that your child loved. So, the youngster will learn another valuable lesson: that every hero he likes, fictional or otherwise, will eventually become evil. Take this from a childhood fan of Marvel's Scarlet Witch and Quicksilver--it's important that he learns this lesson now.

Finally, I want to report that Parents Magazine, which is the most terrifying publication on earth (the Real Death industry has nothing on them), carried an article in the November issue "explaining" why four and five year olds are interested in superheroes. Just to give you a feel for their journalistic prowess, the premise is that superhero appeal is utterly mystifying to a parent (and "parent" means "careless, obese mother" in the Real Death speak of Parents) and needs explaining by actual Ph.D.s who offer comments like "[P]laying a superhero can provide a release for a kid's frustration as well as a chance to try out a leadership role."

You can see why I'm upset.

So please, could you and your superhero blog friends please make sure that Parents magazine is stripped of its privileges to talk about any topic that matters? Please?


I understand your distress about this article, even though I didn't read it and couldn't find it on the Parents Magazine website in a timely manner before the urge to stab out my eyeballs almost overcame me.

But on the matter of dressing up like a superhero, nothing can give a child more self-esteem than dressing like Batman, as this picture of an 8-year-old Dr. K proves: 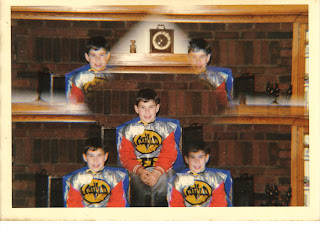 However, dressing up like and playing Superman may be another matter entirely. As a youth, Dr. K enjoyed safety-pinning a towel to the back of his shirt and pretending to be Superman. This enjoyment, however, stopped when his mother explained to him that TV's Superman, George Reeves, committed suicide because he felt so guilty about kids dying when they dressed up like Superman and jumped out of windows. (This, like most things my mother told me, proved not to be true, as I later found out from the film Hollywoodland.)

I know this is all a lot to ask, but it is the Christmas season, and I thank you in advance for your Christian charity.

Sincerely,
A Flummoxed and Irate Parent

As always, I'm glad to be of service, and I welcome the opportunity to answer any further questions in the future. Good luck raising your son.