I'm going to veer off the Halloween Countdown for a moment to share with you a very special and important email I got today. You see, because I'm a doctor, with a Ph.D., and therefore have garnered considerable respect for my authority in several fields, I often get emails asking me questions that relate to my areas of expertise. As always with such matters, I'm glad to be of service when called upon.

So, today I received the following message:

My four-year-old son has some questions about superheroes about whom I know little or nothing. Would you please provide answers for the following:

Thank you in advance for your time,
A concerned parent 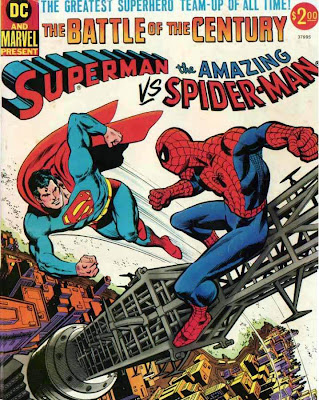 To share with all of you, here are my responses to the questions:

I’m very glad you asked me these questions, as the correct answers to them are essential for your child’s proper growth and development as a valuable member of society.

Spider-Man (please note the hyphen) likes to eat most normal foods, like hot dogs, pizza, Hostess Fruit Pies, and coffee. Despite the fact that he has the powers of a spider, he does not have the same appetite as one, so he doesn't eat flies and other insects. But I know that's what you were thinking.

2. Who are Spiderman's parents?

This is a very good question. Spider-Man's parents died when he was very young. They may have been spies or secret agents or something like that, but if that is the case, then it's stupid and I choose to ignore it. Seriously, the less you ask about this, the better. He was raised by his loving Aunt May and Uncle Ben. Soon after Spider-Man got his powers, he had the chance to stop a robber, but he chose not to because there was no profit in it for him. Then the robber killed his Uncle Ben, and ever since then, Spider-Man has been motivated by the guilt over his inaction that caused his uncle's death. Guilt is a thing that motivates many adults to do things they wouldn't otherwise do, like visit their parents when they get older, despite the fact that their parents aren't very nice people.

Both Spider-Man and Superman are nice guys, but if I had to pick one, I would say that Superman is the nicest. Spider-Man often makes a lot of selfish decisions that he comes to regret, like making a deal with Satan so that his marriage to his wife Mary Jane never happened and he can be "single" again and then start playing around with other women, while Superman always does the best thing for everyone. Superman is probably the nicest guy in the world.

Superman probably would like Rugrats and Elmo if he had time to watch such shows. However, he's usually busy saving the world and beating up bad guys, so all that makes it difficult for him to keep up with stuff like Rugrats and Elmo. He does, however, have a girlfriend or wife named Lois Lane, and he likes her a lot.

Sometimes, if he's fighting a bad guy who isn't putting up much of a challenge, he will use his telescopic vision and superhearing to catch up on some TV during the fight. But then, he usually doesn't pick Rugrats or Elmo; instead, he tries to watch Celebrity Rehab with Dr. Drew, because that Gary Busey is nuts!

Because of his Kryptonian physiology, Superman can eat pretty much anything. He can eat rocks, nuclear waste, hot lava, solid steel, the sun, and anything else you can imagine that is not made of Kryptonite, which will kill him. However, he mostly likes to eat the same things that normal people eat, like hot dogs, pizza, Hostess Fruit Pies (non-Kryptonite flavored), and coffee.

6. Does Spiderman go to school? Why not?

Yes, Spider-Man does go to school. It is part of the essential conflict of the character that he is a normal teenage boy who uses his powers to fight crime while also trying to keep up with the normal things that a teenager has to do, like go to school. He later goes on to college and gets a degree in physics. He now works as a photographer for a newspaper, which doesn't require a college degree at all. So, that was a waste of his time.

7. Does Superman go to school? Why not?

Superman went to school also. Because his super powers did not manifest themselves until later on in his teenage years, he was able to have a relatively normal childhood. Though when his powers started to emerge, his life became very complicated, and he had to hide the powers in order to keep people from being afraid of him or resenting him. As you get older, you will learn that if you are really good at something, you should hide it because otherwise people will fear and resent you.

Superman also got his college degree in journalism and went to work for a newspaper called the Daily Planet. So, college wasn't a waste of time for Superman.

I hope this helps answer your child's questions. If you need any further assistance, please feel free to ask.


And I would like to reiterate that I would be glad to help out any readers with any of their questions that I can answer.
Posted by Dr. K at 9:42 PM

Why would you tell a four year old that Spider-Man is selfish and makes deals with Satan so that he can fool around with other women?

You are the educator of the year.

Because the sooner a 4-year-old knows how the world works, the better off he'll be in the long run.

Technically, he told the kid's mom. Hey, she asked!

You answered a question about what Spider-Man likes to eat without using the word "wheatcakes". For shame, sir. For shame.

That was absolutely brilliant--every word of it.

Why does C.M.Gonzalez assume "concerned parent" is the child's mother?

Yes: WHEATCAKES is the answer.

This was so subtle and brilliant I can hardly contain myself. Loved the Spider-Man commentary in particular.

I would have gone with the Hostess Fruit Flies joke on "what does Spiderman eat."