Tonight, I'm launching a sub-series within the larger Halloween Countdown: Hammer Week! During last year's Countdown, I covered a couple of Hammer films: the crazy awesome Brides of Dracula and the should-be-awesomer Legend of the 7 Golden Vampires. This year, I'm going to devote a whole week to my favorite Hammer films, starting with one of my favorites, Dr. Jekyll and Sister Hyde (1971). 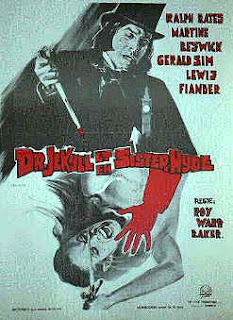 Dr. Jekyll and Sister Hyde is a late entry in the Hammer Horror films, and it comes across as atypical when compared to some of the more famous of the studio's films. Though the movie does feature some graphic violence and the nudity that was becoming increasingly popular in the latter days of the Hammer cycle, it's much more subdued and cerebral than other Hammer films of the early 70s, such as The Vampire Lovers.

On the DVD commentary for the film (which is worth listening to, as many of the principle creators behind the film are still alive, and some of their anecdotes are quite entertaining), writer and producer Brian Clemens explains the creative origins of the film: he simply walked up to a Hammer executive at the studio cafeteria and said, "How about 'Dr. Jekyll and Sister Hyde'?" The exec told him to meet on Wednesday, and by the meeting, the studio had already drawn up a poster campaign. The fact is, all you really need to know about the film is in the title--it's pure high concept.

Ralph Bates, who at that point had become a mainstay at Hammer and an alternative to Peter Cushing as leading man, stars as Dr. Jekyll, who seeks out the secret to immortality in order to give himself more time to come up with cures for humanity's many ailments. He seeks out immortality through female hormones because they, as he explains, give women's skin its texture and cause them to keep their hair longer than men do. He manages to get the hormones from recently dead women in the Whitechapel district of London, where the local undertaker is less than ethically sound.

Jekyll first performs his experiment on a normally short-lived fly. The experiment works, and the fly lives far beyond its life-expectancy, but with a shocking side-effect: the fly has changed gender from male to female.

The doctor continues with his experiments, but he soon runs out of recently dead female sources for hormones. The undertaker proposes a solution and introduces Jekyll to Burke and Hare, based on the real-life murderers who, 60 years prior to the film's events, sold their victims' corpses to a Dr. Knox in Edinburgh for the purpose of training doctors in dissection. This is one of the more interesting elements of the film: writer Clemens weaves in to the Jekyll and Hyde story the (anachronistic) historical details of Burke and Hare, along with the Jack the Ripper slayings.

In fact, after Burke and Hare are caught (and one of them is horribly blinded with lye), Jekyll has to get his female hormones himself, now by killing prostitutes, and he becomes the Whitechapel murderer. The moral ambiguity of the Jekyll character here presents yet another interesting wrinkle in the conventional Jekyll and Hyde story: although Jekyll's ultimate goal is the benefit of mankind, the Jekyll/Hyde split hardly falls along lines of good and evil. Both, in fact, are guilty of murder, and both argue that their murders are justified--his for the future benefit of mankind, hers for self-protection. 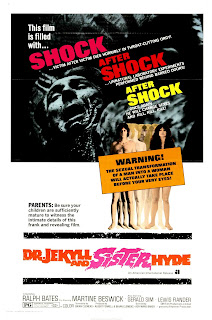 A poster for the film advertises quite sensationally, "Warning: The sexual transformation of Man into Woman will actually take place before your eyes." Though the film itself doesn't quite live up to that hype, the film manages to make the transformation work within a limited budget. Much of the credit should go to the casting of Ralph Bates and Martine Beswick, who look remarkably alike,with similar hair, bone-structure, and the added effect of a mole on the right side of the face.

In the trailer, you can see here how well cast the two leads are. The trailer also highlights some of the clever effects used in the film during the transformation sequences, such as having Beswick replace Bates off-screen during an unedited take. You also see one of the more effective images from the film's climax: Jekyll and Hyde's face morphing behind a red stained-glass window. Also, Hyde's transformation back into Jekyll is usually signified by Hyde developing a case of "man hands," where Bates's hand comes into the screen as if it belongs to Beswick. However, the movie isn't quite as shocking as either the trailer or the poster claim.

Martine Beswick is certainly stunning as Sister Hyde, but I do wish she were given more to do. In fact, while this movie is effectively atmospheric and entertaining, it never quite gets as much out of its central concept as one might hope. One scene in particular reveals the missed opportunity: when Jekyll's friend, Professor Robertson, who is investigating the Whitechapel murders, meets Mrs. Hyde, who claims to be Jekyll's widowed sister. Robertson is a lech, and he suspends his investigation at a crucial point in order to take Hyde back to his room. There, she seduces him and stabs him in the back. She then proceeds to continue stabbing him in a murderous frenzy, which quickly cuts back and forth between her face and Jekyll's in make-up and women's clothes.

Another line hints at the film's potential in terms of sexuality as well. When Hyde seduces the upstairs neighbor, Howard, she claims to know what man's pleasure feels like. The viewer realizes at this moment that Hyde and Jekyll are one in the same, sharing the same experiences, and that Hyde may be acting out Jekyll's desires as well as her own, but the scene pulls back before going much further. The issues of gender distortion and ambiguous sexuality are only hinted at in this scene, and I wish that the filmmakers had really cut loose with these ideas.

Director Roy Ward Baker, who did more journeyman work on other Hammer films like The 7 Golden Vampires, ultimately makes this film work despite its limitations. The limited sets, depicting urban Victorian streets, are encased in fog, giving the stalking and murder scenes some added claustrophobic atmosphere. In general, the film looks really good (with the exception of the final shot, which should be more effective than it is due to some weak make-up effects). But no Hammer film ever achieves perfection, and, in the end, I might prefer the restraint of this film to the direction the studio ultimately pursued in the 1970s, which became more and more exploitative and less interesting (with some exceptions I deal with later in the week).

Here's an extended clip of the first transformation scene from the movie. Warning: this does contain some nudity as Sister Hyde explores her new body.


Also featured in this scene is Susan Brodrick as Jekyll's love interest and upstairs neighbor, Susan Spencer. Brodrick (or Broderick, as her name is sometimes spelled) memorably first appeared as the antique store owner in Blow-Up, but, other than some stage work in the late 70s, I can't seem to find anything else about her acting career after Dr. Jekyll and Sister Hyde. I'd be curious to know what happened to her, and if she is even still alive.

Thanks for posting this - it's going on my Netflix queue.

I have a radio spot advertising it that I'll be posting sometime soon. I'll link back to here when I do.