While Hammer Films is best known for their gothic horror films featuring Dracula, Frankenstein's monster, the Mummy, and various other creatures, they also produced a series of suspense thrillers in the 60s and 70s. These thrillers have not fared so well over time, mainly because their contemporary setting tends to date them, but also because they lack the sex and violence that the gothic horror films are often known for. However, these "mini-Hitchcocks," as they were known around Hammer studios, are often quite well done.

One such film is Fear in the Night (aka Dynasty of Fear and Honeymoon of Fear), written and directed by Jimmy Sangster and starring Judy Geeson, Ralph Bates, Joan Collins, and Peter Cushing. 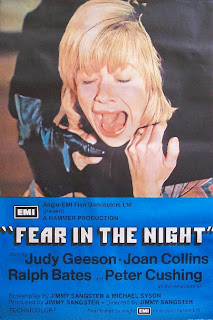 Most of the film takes place in a quaint British boarding school run by Headmaster Michael Carmichael (Cushing). A young woman named Peggy (Geeson) has just married a teacher at the school (Bates), and as the movie opens, Peggy is packing in preparation for moving to her new home, which, for some reason, she hasn't seen yet. The night before she leaves, she's attacked by a one-armed assailant in her room. However, because she has a history of mental breakdown, no one seems ready to believe that she was assaulted, including her new husband. The suspense in this movie then stems from the question: is she imagining these attacks, or is she being gaslit?

Once she arrives at the school, she hopes that its isolation will provide safety from her unknown attacker, but that is not the case. On an afternoon alone in her cottage, she is attacked again by the same one-armed man.

While wandering around the empty school, Peggy is introduced to Headmaster Carmichael, who is sitting in a classroom listening to recordings of students in a Latin class. Carmichael, as played by Cushing, does not put one at ease: he describes his bizarre fascination with knots, and he has a creepy conversation with Peggy about her hair (where he also reveals that he has a prosthetic arm!). It goes without saying that Cushing is the red herring in the film, but he is perfectly effective and creepy as the imbalanced headmaster.

Joan Collins also appears in the middle of the film as Carmichael's wife, Molly. Her introduction is also creepy: just as Peggy is admiring a cute bunny rabbit in the woods, Molly walks up and shoots it. She then proceeds to carry the bleeding rabbit carcass around for the next few minutes, later offering it to Peggy as a housewarming gift. Other than this and one other scene later in the film, however, Joan Collins has little to do here, so her billing in the film (and the DVD packaging that features her prominently on the front cover) are a bit misleading.

The film manages to build suspense slowly, with long, silent scenes of Peggy exploring her new location. Writer/director Jimmy Sangster says on the DVD commentary for the film that many of these sequences were shot to pad the film out to 90 minutes. That may be true, and some viewers may complain that the movie is slow going at first, but I found these scenes worked to help develop the sense of dread that permeates the action.

And no matter how slow the first half of the movie is, it picks up considerably in the last half-hour, with a series of twists that continue to throw Peggy off and undermine her mental stability. The whole plot becomes wildly preposterous, but the characters acknowledge the preposterousness. I don't want to spoil it because I did find it all great fun and genuinely surprising. In fact, on watching the film a second time, I found it held up well--none of the movies twists violate anything that happens in the first half of the movie.

I also like this movie because of its star, Judy Geeson. Geeson was among the group of mod young British actresses in the late 60s and early 70s who emerged in the wake of Julie Christie's popularity. She's in To Sir with Love--a movie I like a whole lot more than I know I should--and her career, at its peak, alternated between horror films and bawdy comedies. Danny Peary's description of her in his essential reference book, The Cult Movie Stars, explains exactly how I feel: "she was likable and had a 'look' that makes some of us nostalgic when we see her on screen." In Fear in the Night, she really gets the shit kicked out of her, and it's difficult to say that she ends up triumphant in the end. The movie posters all highlight her victimization as the key selling point of the film. 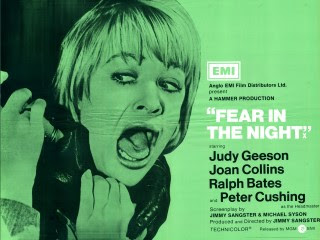 Here's the trailer. Unfortunately, the trailer spoils the big twist at the end, so watch with care if you plan on seeing this movie.