I'm a sucker for end-of-the-world scenarios and last-man-on-earth stories, whether it's alien invasions, zombie attacks, disease outbreaks, climate change, or any other possible disaster that could bring about a huge, sudden drop in world-wide population. I especially enjoy the basic elements that all these stories share as far as the survivors are concerned. What supplies are absolutely necessary? What skills will prove valuable? Will certain basic social structures survive, or will anarchy ensue? What happens to conventional morality when such a disaster occurs and basic survival becomes the most prominent goal?

I say all this, of course, knowing full well that whatever thought-experiments might arise from such stories, I would probably be one of the least likeliest to survive if such a disaster occurred. And if I did, I would have very little to contribute to the new society. A literature and film scholar would be of little use, and I lack most of the other skills necessary for survival. I would have difficulty living without most of the basic modern conveniences, like a microwave or the internet, and once the coffee was gone, I would be of absolutely no use to anyone.

All this is prelude to the fact that I really like former Hammer staple Terence Fisher's 1965 sci-fi film, The Earth Dies Screaming (not to be confused with the Psycho-Rama classic, My World Dies Screaming, which I covered the other day, or with this or this.). 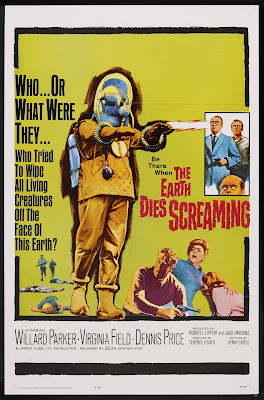 The Earth Dies Screaming chimes in at a lean 64 minutes, and much of the film is dialogue-free, as the main characters explore a world in which nearly everyone has died.

The film opens in the moments just as people suddenly start dropping dead: a train conductor dies, causing the train to derail; commuters die on the railroad platform waiting on their train; a pilot dies and crashes his plane behind a hill. The way people die, however, the film should be more aptly titled "The Earth Dies Sleeping."

Driving into a small, Northern England village comes Jeff, a retired American astronaut who has somehow survived whatever caused everyone else to die. Jeff systematically searches the village, looking for weapons, supplies, and survivors. He settles down in the local hotel, helping himself to the well-stocked bar, which is exactly what I would do in this circumstance.

The first 8 1/2 minutes of the film are completely dialogue-free, until a few more survivors start to show up at the inn. All have different stories about how they survived, but their stories share one thing in common: all the survivors were in some kind of environment where the air was either filtered or came through it's own oxygen supply.

Much of the film focuses on the personal dynamics of the survivors. None seem to be going through a denial phase, thinking that the current situation is anything but permanent. Some, in fact, start philosophizing on what the new world order will be like. One young newlywed comes across a bunch of money, and he makes an interesting commentary on just how useless it all now is, when, just a few days before, he would have done anything for it.

Most of the last survivors of the human race, it turns out, are complete bastards, especially the character Taggert, played by George Sanders stand-in Dennis Price. Taggert is clearly only out for himself, and he even tries to take a female companion along with him at gunpoint.

Some alien robot creatures eventually show up, but they merely lumber through town with unclear motivation, only attacking when they are attacked. The film, to its credit, gives us precious little information about what has happened. We know it's an alien invasion, but we don't know how the aliens killed everyone, and we don't know why they aren't bothering to eradicate the survivors. The robots, however, look awesome: 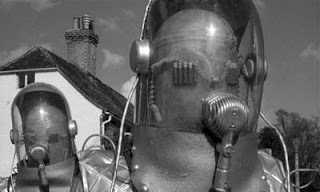 In the final twenty minutes of the film, all the dead people suddenly come back to life, but now with opaque white eyeballs. Suddenly, The Earth Dies Screaming becomes a zombie movie. Jeff quickly determines a way to stop the robots and zombies, at least temporarily, and the film comes to a hasty, and not entirely complete, resolution. I appreciate the fact that everything is not suddenly fixed at the end.
Posted by Dr. K at 2:35 PM

Hope you like it. If not, it's only an hour out of your life.

This should be one of those little cheapo DVDs that drugstores sell the month before Halloween. Instead, I've only seen the damn thing in 10 minute installments on bloody YouTube, and I think I missed the zombie uprising.

Supposedly, though, this was a influence on George Romero before Night of the Living Dead.

It's available on DVD in the Midnight Movies series, paired with CHOSEN SURVIVORS: http://www.amazon.com/Chosen-Survivors-Earth-Dies-Screaming/dp/B000RXVNCE/ref=sr_1_1?ie=UTF8&s=dvd&qid=1224780467&sr=1-1

It also seems that Amazon is having a big 50%+ off sale on the Midnight Movies DVDs, which might require me to spend some money.