Halloween is now just a couple of days away, but it should be noted that tomorrow is an important date in Halloween history as well: it's the 70th anniversary of Orson Welles and the Mercury Theatre's famous War of the Worlds broadcast. 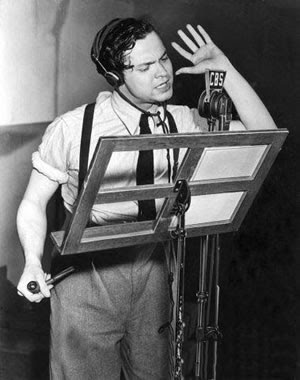 As part of a celebration of this anniversary, I'm participating in a live recreation of the broadcast tomorrow night at the university. I happen to have scored the plum role of "Prof. Pierson," the same role that Welles played in the original broadcast, and the last character standing at the end of the play. I originally toyed with the idea of playing the part as Welles in his drunken wine-shill phase, but let's just say that I was encouraged not to do that.

One of my favorite comic stories as a kid was this one, originally published in Superman 62, but reprinted in the Superman from the 30's to the 70's collection, where Superman teams up with Orson Welles to fight off a Martian invasion: 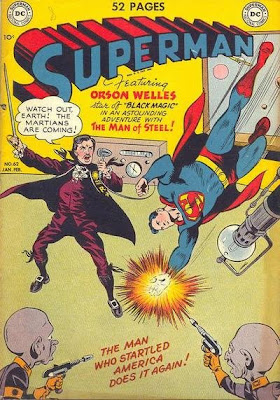 That's excellent. Did you ever hear the Radiolab episode when they explored the history of the WotW broadcast? It was fascinating, I'm pretty sure you can download it from NPR's site.

I'm very jealous. Our local college station also did a rebroadcast but I did not learn of this till after the project was completed. I would have loved even a bit part.

Any chance you can stream your performance?

I wish I could stream it. The estate of Howard Koch, who co-wrote the script, controls the copyright. They gave us permission to do the performance for free, so I don't want to abuse that nice gesture by breaking the copyright.