Today's Halloween Countdown update is coming in a bit later than I had hoped, but I've just had a hell of a day, and, honestly, I haven't had the chance to come up with a post for today.

So, instead of coming up with something clever about old horror comics or movies, I'll just tell you about my day, which in and of itself is pretty horrifying.

I had originally planned to post today's entry late last night. However, I never got the chance to write it because

That monster kept me up so late that I ended up sleeping through my alarm. By the time I got to work, I was really late, and it just so happened that the head of my department was looking for me when I should have been there. You see, this particular head serves several departments, and he only spends a certain amount of time in each during the day before moving on to the next one. He basically accused me of blowing him off when he said that

It turns out the head needed to see me because a parent was complaining about a grade I had given a student on a recent paper. I told the head to give me the parent's phone number, and I would talk to her myself.

When I called the parent, it became clear to me that she had me mistaken for another teacher. She admitted that her son couldn't remember his teacher's name, but he could describe the teacher. After she gave me his description, I explained that this could not possibly be me because

But it was another hour on the phone before I could convince her that she had the wrong teacher.

By then, it was lunch time, and a colleague and I were supposed to meet Chris Sims at our favorite Mexican restaurant for our regular Friday lunch. We got to the restaurant on time, but Chris was nowhere to be found. We waited an hour, but there was no sign of him. Then my colleague got a text message from Chris, and it turned out we were waiting in the wrong place. As the colleague explained,

By that time, it was getting pretty late, so I decided to skip the glacier, go home, contemplate my day, and make some future plans for the rest of the Halloween Countdown: 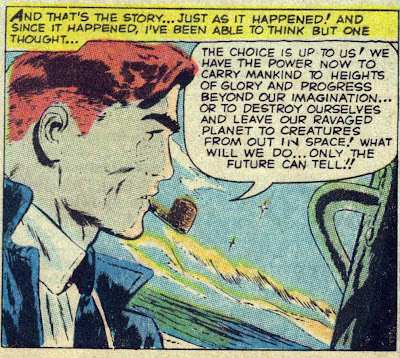 All of these titles, by the way, came from the same awesome comic: Where Creatures Roam 2 (1970). 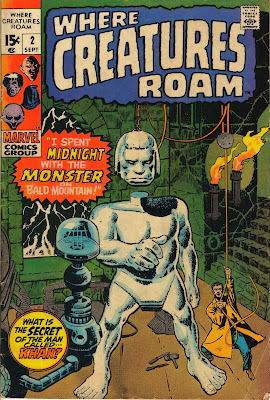