One of the nice surprises in the Hammer Horror Series DVD set that came out in 2005 was the inclusion of Night Creatures, aka Captain Clegg (1962). 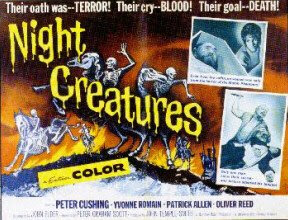 This little known Hammer gem adapts the story of Dr. Syn, from the 1915 novel by Russell Thorndike, though here the character's name is changed to "Dr. Blyss." Other than the name, however, the movie follows the basic story faithfully. The story takes place in the late 18th century, with Dr. Blyss as the reverend in the British port town of Dymchurch. Blyss (Peter Cushing), however, is secretly the notorious pirate Captain Clegg, who is believed dead after being hanged in prison. Instead, Clegg reformed (somewhat) and made his way to Dymchurch, where he also helps the town escape economic depression with a large-scale liquor smuggling operation that occasionally catches the attention of British authorities.

The smugglers, led by Blyss and also including a young Oliver Reed, put on phosphorescent skeleton costumes and ride around the local swamp as the "Marsh Phantoms," who effectively scare away the curious and the superstitious. However, a group of British soldiers, led by Captain Collier, come to investigate reports of smuggling, and they prove much more difficult to dissuade.

This story doesn't fit the typical Hammer Horror model, as there is little of the supernatural or other horror elements (though there is some tongue trauma reminiscent of The Mummy). The "Marsh Phantoms" are certainly visually effective, but the audience knows from the beginning that these are men in costumes, so they are not meant to scare us. It is, however, an entertaining adventure story, and the fact that the heroes use costumes--including a creepy scarecrow disguise--makes this film Halloween-appropriate.

But, like the best Hammer films, this one is dense and efficient. It clocks in under 90 minutes, as most Hammer films do, but it manages to squeeze in a pretty complicated plot with many obstacles, villains, and sudden turns. But what stands out about this film for me is Peter Cushing's performance as Dr. Blyss/Captain Clegg. 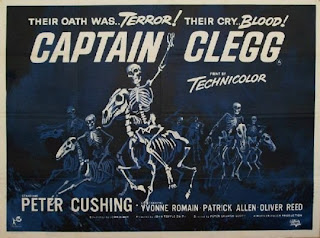 Even moreso than Christopher Lee, Cushing is a staple of Hammer films, and he nails both the stoic heroism of Dr. Van Helsing and the obsessed villainy of Dr. Frankenstein. But he played those two roles in particular so often, that it's nice to see him give a different kind of performance. And here, he seems to be having more fun than normal, even getting the chance to laugh once in a while.

Here's a link to the trailer, which makes the film seem more like a horror movie than it actually is.

Soon after this film was released in 1962, Walt Disney's Wonderful World of Color ran their own version of the Dr. Syn story--The Scarecrow of Romney Marsh--starring Patrick "Number 6" McGoohan as Dr. Syn, which may be one reason why Night Creatures/Captain Clegg is not as well known as other Hammer films. On November 11, Disney is going to release Dr. Syn: The Scarecrow of Romney Marsh, in a DVD set that includes both the three-episode series from 1963 and the re-edited theatrical release version, Dr. Syn, Alias the Scarecrow. I loved the Disney version when I was a kid, but I haven't seen it since, so I'm curious to see if it holds up. It's too bad Disney can't put this out before Halloween.
Posted by Dr. K at 9:35 PM

I had the exact same experience with this film when I picked up the boxset. I'm always surprised (pleasantly) by Cushing's performances since I grew up with him as simply Grand Moff Tarkin.