The 1972 Tales from the Crypt movie, made by Hammer competitor Amicus, should not be confused with the HBO series and its skeletal host, the Cryptkeeper, though both share a source in the EC Comics series of the same name. There is a Cryptkeeper in this film, but this one is played by Sir Ralph Richardson, and he has a little more to do here than just introduce a series of short horror stories. 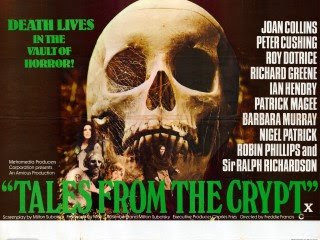 In this film, a group of tourists follow a tour guide through an old abbey, when several of them are briefly held up and get disconnected from the main group. This smaller group then follows several passages until they are led through a secret door, and there they find the Cryptkeeper, who welcomes them to their chamber. The Cryptkeeper asks each person to explain what he or she plans to do once they all leave, and this provides the frame for the film's anthology structure.

The short stories in this film are a mixed bag, though all are stylishly directed by Hammer veteran and one of the greatest cinematographers in the history of film, Freddie Francis. All were also adapted directly from the EC series of the same title, as well as from Vault of Horror.

The first story, "And All Through the House," stars Joan Collins as a wife who murders her husband on Christmas Eve while the radio announces that a mad killer is on the loose in a Santa costume. This film features very little dialogue, as Collins tries to dispose of her husband's body, cover up her crime, keep her anxious daughter in bed, and protect herself from the killer Santa who inevitably shows up. This is a fun, darkly comic story up until the very end, when it's undermined by a really dissatisfying and unimaginative climax. You can check the whole thing out here:

"Reflection of Death," starring Ian Hendry, is a waste of the star's talent. Hendry, who had a promising career beginning with his role as Steed's first partner on The Avengers, was notoriously difficult to work with due to his alcoholism, and by this time, his career was virtually in the toilet. This particular story is probably the least successful of the entire film.

The third film has Peter Cushing in a very uncharacteristic role, playing an old junk man who is beset upon and tortured by his wealthy neighbors, who hope to drive him out of his home and then buy the property for cheap. Cushing's character, Grimsdyke, communicates with his dead wife through a ouija board, and she sends him warnings that danger is afoot. In real life, Cushing was devastated by the loss of his own wife only a year earlier, and it's easy to speculate that his performance as this emotionally fragile man was influenced by that recent experience. This story is titled "Poetic Justice," and while that title turns out to be quite literal in the end, this particular story seems the most consistently in line with its EC source.

Of the five stories, the last two are probably the most effective, and certainly worth checking this film out for. "Wish You Were Here" is a fairly simple variation on W. W. Jacobs's "The Monkey's Paw," so it's largely predictable, but the ironic results of the couple's wishes still manages to be darkly comic and gruesome.

Finally, "Blind Alleys" is the best of the lot, with an autocratic director of a home for the blind getting his comeuppance from the residents. The blind residents' revenge builds slowly and creepily, and it may, for better or for worse, anticipate the Saw movies.

Following the final bit, the frame narrative wraps itself up, and we learn why all these people were brought together, though this ending is easily predictable.

There is one thing, however, that I'm curious about regarding this film, as well as its successor, The Vault of Horror, and other British horror anthology films that were popular in the 70s. Though the stories used in this film date back to the 50s, and this type of frame narrative goes back to The Decameron and earlier, I wonder if British horror comics writers like Neil Gaiman, Alan Moore, Jamie Delano, and others were strongly influenced by these films in the similar work they did for DC and later its Vertigo imprint. Gaiman especially used such a device repeatedly in Sandman, and this movie would have been popular during an impressionable time in his youth. At the very least, while I was watching the movie, I got a real Vertigo vibe from it, moreso even than the sense of connection to its original EC source material.
Posted by Dr. K at 11:48 AM

I'm in complete agreement regarding this movie. The final three segments more than make up for the weak stories which open the movie. Like the comic, there'a an over the top cruelty which could easily fall into self parody but doesn't, making the payoffs more cathartic.

I can't speak for any of those Brits, but I'd planned a run of "Midnight, Mass." that was most certainly influenced by this movie. Alas, it never came to be.