In the history of bad movies, very few movies seem so overtly to eschew quality as They Saved Hitler's Brain. 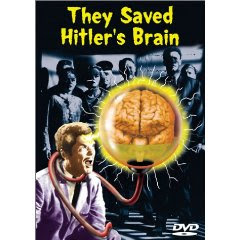 I've often wondered if the creators came up with the awesome title, and then just decided to coast from there. If that's the case, I totally understand that impulse, as that is exactly what has happened with my own creation, Dr. Sir Isaac Darrow: Science Lawyer.

But despite its awfulness, They Saved Hitler's Brain remains one of the more fascinating bad movies ever made, and one that frequently gets referenced in pop culture.

What makes the movie fascinating is the fact that most of it is actually another movie, titled Madmen of Mandoras, originally released in 1963. Mandoras had also been produced under a couple of different titles, including Maniac and The Return of Mr. H ("Mr. H" is the name used for Hitler in a flashback sequence that explains how the head of the Nazi leader survived WWII). The film involves a CID agent, Phil Day, and his wife, who also happens to be the daughter of a famous scientist, traveling to the South American island of Mandoras to investigate the disappearance of her sister and father, Professor Coleman, who happens to have developed the only antidote to something called "G-Gas," a kind of deadly nerve gas weapon. On the island, Phil discovers a surviving band of Nazis with a plan to take over the world using G-Gas. The Nazis are led by the head of Adolph Hitler, which has been preserved in a jar and barks orders like "Mach Schnell!" 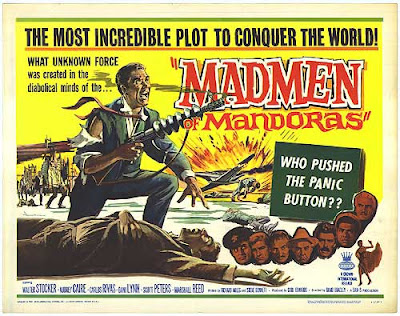 (As you can see, the poster misses the film's key selling point--nowhere at all does it mention that the film features Hitler's head in a jar!)

The 1963 film runs about 74 minutes--a good, short length for a B-picture fixed to a double bill. However, in the late 60s and early 70s, the film's production company, Crown International Pictures, was looking to gain more revenue from its film library by selling off the television rights, probably for "The Late Show" or for the 3:00 Movies I remember so fondly from WPIX in New York when I was a kid. It turned out, though, that the lengths of these movies were problematic, as TV stations wanted films that fit a two-hour time slot with commercials. So, Crown proceeded to pad out Mandoras by twenty minutes, and thus They Saved Hitler's Brain was born.

But the twenty minutes added to the film are just ridiculous.

A subplot was created and tacked on to the beginning of the film featuring two bickering CID agents, Vic and Toni, who are assigned to protect Professor Coleman before he has been kidnapped by the Nazis. The footage was clearly shot by amateur filmmakers with nonactors some time in the early 70s (no sources that I found can identify when this footage was shot, and the film's copyright date is listed as 1963. The film first appeared on TV under its new title in 1976.). Nothing was done to make it mesh with the look and style of the earlier film. Vic is a Steve Perry lookalike who never wears a suit. Toni is shot by the kidnappers, but she manages to survive long enough to get a warning to Vic before he's ambushed by a double agent. Then, a daytime car chase ensues, and Vic is killed in a nighttime collision, in which the filmmakers used footage from Thunder Road. The film even cuts back and forth between the nighttime accident and the pursuers watching it in a scene shot during the day.

While the first twenty minutes or so looks like a bad home movie, the Madmen footage was actually shot by cinematographer Stanley Cortez, who also shot such films as The Magnificent Ambersons and Night of the Hunter, so the contrast in styles is jarring.

For those whose prime interest in this film is Hitler's head in a jar, they are doomed to disappointment. We don't get to see the head until very late in the movie (and then, it appears beneath a giant swastika that happened to be drawn backwards. Man, quality control in the post-Third Reich Nazis dropped off sharply.) And even when he shows up, Hitler doesn't get much to do, except shout "Mach Schnell!" a couple of times and then look scowly. There is a nice scene late in the movie, however, when Hitler's head is being transported in the back seat of a car in order to escape the G-Gas detonation. One of Hitler's commanders if forced to kill an ally who has gotten cold feet, and Hitler's eyes glow and a smirk crosses his lips as he witnesses the shooting.

I have to say that the plot of Madmen of Mandoras, either separately or as part of They Saved Hitler's Brain, does not make much sense to me. At first, I thought the editors of the latter film had just butchered the original, but upon watching Madmen itself recently, I realized that that wasn't the case--as far as I can tell, Crown just tacked on the new footage to the beginning of the older movie. And while Madmen is measurably a better movie than Hitler's Brain--at least ore consistent in terms of filmmaking and acting--the latter is still an entertainingly bad movie. However, it doesn't hold a candle to the greatest of all movies featuring surviving severed heads: The Brain that Wouldn't Die!
Posted by Dr. K at 10:35 PM

I've always wanted to see this just because of the name but it sounds like a disappointment. Thanks for the warning!

That cutting and pasting sounds like the same fun process that Godfrey Ho used in his ninja movies of the 1980's. At least he linked them together with fake phone conversations.