I'm realizing in my selection for Hammer films this week, I haven't picked any that fit the typical Hammer formula, like their more popular Dracula and Frankenstein movies. It's not that I don't like these movies--it's just that they tend to blur together in my head and often remain indistinguishable from one another. So, the ones that stand out for me here are the movies that do something different and move beyond the formula.

It also seems like I'm picking films from late in the Hammer horror cycle, which ended in the late 70s just before new executives launched the Hammer House of Horror TV series in the 80s. By the late 60s, the Hammer formula had been pretty well worn after ten years, and audiences were looking for newer, more sophisticated horror movies after the success of Rosemary's Baby and Night of the Living Dead. Hammer executive Michael Carreras tried a variety of approaches to bring new life to his company. For one, he tried to add even more sex and graphic violence into the company's films, with decidedly mixed results. Other attempts were made to revise the tired horror genre by mixing in elements from other genres, and these had much more interesting results, though not much box office success.

One of these revisionist horror movies happens also to be my favorite Hammer movie: Captain Kronos - Vampire Hunter (1974). 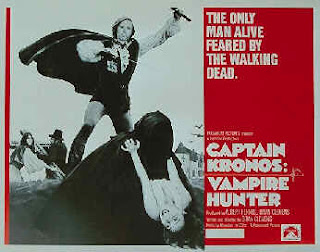 Though it takes place in 18th century Europe, Captain Kronos blends elements of Westerns and samurai movies with some basic horror conventions, though writer/director Brian Clemens (probably best known for his work on The Avengers) has a good time playing with horror conventions as well.

Kronos (played by German actor Horst Janson, whose voice is dubbed throughout the movie) has a past that remains a mystery. He has a military background, and upon his return home from war, he found his mother and sister had been turned into vampires. He killed them, but not before they bit him on the neck and he had to do something to survive the bite, though what that is is not explained. He has a massive scar that runs halfway around his torso, which seems to have happened during a military campaign. Kronos's partner is Professor Grost, who does most of the basic work of making weapons and so on while Kronos remains in a constant state of readiness for a fight with vampires (Kronos also trains, smokes pot, and meditates during his downtime).

And Kronos is a total badass, cut from the same cloth as Clint Eastwood and Toshiro Mifune (Clemens even admits to the Western and Kurosawa influence in the DVD commentary). In one of my favorite scenes, Kronos and Grost visit the local tavern and have to face down three thugs who have been hired by the villain to kill the heroes. The thugs, led by Ian Hendry in a fabulous cameo, try to antagonize Kronos by insulting his hunchbacked colleague. Rather than take their bait, Kronos explains that it's rude to call attention to another's physical misfortunes, as they each have characteristics that would open them up to ridicule as well. Here, we get the quick-draw scene, but instead of guns, they all have swords, and Kronos dispatches the thugs with two quick swings of his sword. The action happens so fast, however, that we don't really see anything: Kronos reaches for his sword, we hear two quick slicing motions in the air, and then the sword is back in its scabbard. It happens so fast, in fact, that the thugs require several seconds before they realize they're dead. It's a great scene, with editing taken right out of Leone. (In a later awesome badass scene, Kronos uses two swords to disarm--but not kill--a group of attacking villagers in a cemetary.)

Kronos and Grost are first introduced in the movie traveling through the forest, when the come across a young gypsy woman in stocks and covered with tomatoes. Kronos asks her what she has done, and she responds, "I danced on a Sunday." Kronos reaches for his blade, and we're not quite sure what he's going to do with it, nor is the girl. He cuts open the lock on the stocks, and sets her free. The girl, Carla (Caroline Munro--one of the great stars of horror and sci-fi), decides to travel with the duo, though she doesn't yet know what they do for a living.

Both Janson and Munro have considerable chemistry, as scenes between Kronos and Carla are erotically charged, though the two say almost nothing to each other. Clemens makes some interesting creative choices in filming their love scenes. In the key example, Clemens uses lighting and shadows to frame each character as they approach each other to embrace. It's a great scene, and especially surprising in its subtlety considering how other Hammer films of the same period were engaging in more graphic depictions of sexuality. It also reveals something important about the characters--neither speaks much in the film, but we get the sense that Kronos especially lives his life as if he could get killed by a vampire at any time, and Carla, with her mysterious past, finds this life attractive as well.

A friend from their past, Dr. Marcus, has called on Kronos and Grost to help his village out with a strange epidemic of vampire attacks. These attacks, however, don't follow typical vampire conventions: they take place during the day time, the victims (all young women) look prematurely aged but are not drained of blood, and they have blood stains on their mouths. Grost seems to have an idea what is going on, and he launches in to an explanation that establishes a key trope of the film--many different species of vampires exist, and all require different methods of destruction. While this does give Clemens the opportunity to play fast and loose with vampire lore, it also solves a big problem that a lot of vampire films have. Rather than establishing unique rules for killing vampires that don't exist in any other vampire story, Clemens basically concedes that every rule from every vampire story works in this world.

This trope also prepares us for one of the film's key set pieces. In a surprise twist, Dr. Marcus gets turned into a vampire, so Kronos and Grost tie him up and try to find out how to kill him in order to determine exactly what kind of vampire they're dealing with. This is a pretty effective horror scene: they try stabbing him with a wooden stake, hanging, and burning before stumbling on to the correct method.

Grost also has some unique methods for tracking down and identifying vampires. One, which becomes a funny gag that runs through much of the movie, involves placing a dead toad in the path of a suspected vampire. This comes, he explains, from an old folk rhyme:

“If a vampire should bestrode
Close to the grave of a dead toad
Then the vampire life shall give
And suddenly, the toad shall live.”

In other words, a vampire passing near the grave of a dead toad will cause the toad to return to life. Though this has the diction and rhyme scheme of Lord Byron's 1813 vampire poem "The Giaour," I think the rhyme is a creation of Brian Clemens. Whatever the case, it does set up one of the funniest lines in the movie. Grost and Carla have set about burying dead toads throughout the woods in order to track the vampire's movements. Grost seals the toad corpse in a wooden box, drops it in a freshly dug grave, and announces, "Toad in the hole." I don't know exactly why that line's funny, but it makes me laugh every time I see the film.

The film ends with an exciting sword fight, made especially realistic by the fact that Horst Janson is a trained fencer, as is the actor playing his opponent. Therefore, Clemens did not need to double either actor, and he had much more freedom to choreograph and film this scene. 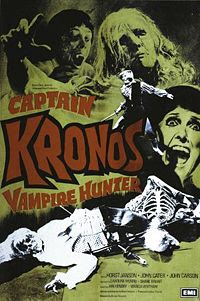 Captain Kronos - Vampire Hunter is clearly meant to set up a franchise that unfortunately never happened. In fact, I would go so far as to say that the fact that Captain Kronos didn't become a huge multimedia franchise is one of my biggest pop culture disappointments. In the DVD commentary, Brian Clemens, who also owns the rights to the character, discusses attempts he has made to revive the character as a TV series or in further movies, none of which have come to fruition. There were a few unauthorized comic stories that ran in the Hammer House of Horror magazine, but that's it, as far as I can tell. However, what seemed inventive and original in this movie has been borrowed so frequently by the likes of Buffy, Blade, and Anita Blake that I fear any new Captain Kronos work would seem derivative. Also, I think we have all the vampire hunters and slayers that we need right now, though none are quite as cool as Captain Kronos.

Here's a link to the trailer, which highlights some of the more awesome parts of the film, including Kronos's costume, the swordfighting, and Caroline Munro. I also like the stylized "K" that serves as Kronos's logo and could function very well for this blog, too.
Posted by Dr. K at 11:27 PM

This is one of my favorite Hammer movies. I love this movie so much. Having Caroline Munro in it definitely helps. Great write-up on it.

Toad in the hole is a cheap British supper - sausages in a Yorkshire pudding with gravy - it's great!! http://www.deliaonline.com/recipes/toad-in-the-hole-with-roasted-onion-gravy,1030,RC.html

I too love this film. I saw it first on a Halloween night as it played on the Sci-Fi channel years ago, back to back with "The Brides of Dracula," which was my first time seeing also. So it became a Halloween tradition to watch them both back to back on one night near the 31st. When they came out on DVD I was able to put away my old videotape of them and enjoy them even more.