The first Hammer horror film I ever saw, though I was far from aware of the Hammer brand, was The Mummy (1959). I saw it, like much of my early exposure to classic horror movies, as a 3:00 Movie on WPIX when I lived in New Jersey in the 1970s. 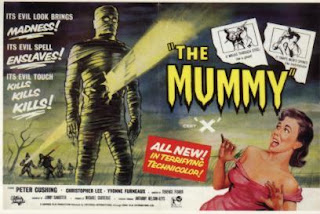 And, like many of the horror movies I watched at that time, it scared the shit out of me.

Specifically, the flashback scene that reveals the origin of the Mummy etched itself in my memory like very few movie scenes at the time. Nothing is particularly graphic in this scene, but enough is suggested that activated my young imagination. I was especially disturbed by the scene of the priest Kharis (Christopher Lee) having his tongue cut out. We see the clamp go down on his tongue in a medium shot, and then the film cuts to a reverse shot from behind Kharis's head, as the guard slices the tongue off, though the cut is not visible to us (this sequence is used in the preview below).

This series of shots best encapsulates my appreciation of the early Hammer horror films. They are slightly more graphic in their violence than the classic horror movies of the 30s and 40s, but they still rely heavily on suggestion--the suggestions, however, are more disturbing.

Other than this long flashback scene, Christopher Lee doesn't get much to do as the Mummy in this film. However, he is still effective as Kharis, with an imposing presence, a slow, lumbering gait, and expressive eyes that reveal his inner conflict toward the end of the movie. And Peter Cushing once again plays the hero role that he nailed in so many of these movies: the deadly serious hero who is utterly, single-mindedly convinced that the supernatural exists and must be destroyed.

The Mummy is among the first group of classic horror revisions that Hammer undertook, with the creative team of writer Jimmy Sangster, director Terence Fisher, and producer Michael Carreras on board as they were for The Curse of Frankenstein and The Horror of Dracula. Unlike those other two movies, however, The Mummy varies little from the basic plot of the Univeral Mummy movies: the Mummy sets out to seek revenge on those British archeologists who desecrated the tomb of the queen he protected.

The Mummy does have problems with an overt colonialism that's never really challenged, and this may affect the way the movie ages. England is presented as the locus of order, which is only disrupted by the intrusion of a chaotic, foreign, Eastern influence. Also, Cushing provokes Mehemet Bey, the Mummy's keeper, by insulting his religious beliefs. But, despite those inevitable problems with this particular property, The Mummy serves as a model for Hammer horror at its best: a lean, efficient, and effective movie, with a creative team and ensemble of actors at the top of their game. Though the movie no longer gives me nightmares like it did my 7-year-old self, I find that the shocking moments in this movie still earn their shocks honestly, and the Mummy itself is well-designed and haunting.

Here's the trailer for The Mummy, which highlights many of the qualities I've referenced above.

I love this film. It's been awhile since I've seen it though. Great write-up on it. Definitely plan to watch some Hammer films this Halloween. I generally do every year.