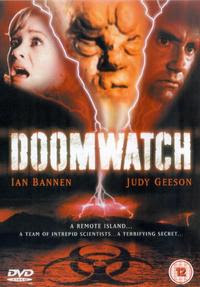 The 1972 film Doomwatch is not a particularly exciting horror movie, and some might even debate its categorization as such. Nonetheless, I find the movie notable for a variety of reasons, and not simply because it stars Judy Geeson.

Doomwatch comes from a British TV series of the same name, which was currently in its final season when the film version was made. In both the series and the film, "Doomwatch" is the name of a British government organization charged with investigating environmental problems. I really wish our own government agencies took on such dramatic names. The Environmental Protection Agency would probably get a lot more funding if it found a similar name.

In the film, a scientist named Del Shaw (Ian Bannen) goes to the remote island of Belf to investigate the effects of a recent oil spill on local wildlife. While there, Shaw discovers that many islanders are suffering from a bizarre outbreak of acromegaly. However, his investigation of the outbreak is met with resistance by the locals who don't take kindly to outsiders.

At the beginning, Belf is highly reminiscent of Summerisle, the mysterious, isolated island community in the classic The Wicker Man, which was actually produced the following year after Doomwatch. Shaw keeps meeting villagers who quickly and rudely close their doors on him, and he has difficulty even finding a place to stay for the night. He finally gets to room at a house where he meets the new local schoolmistress, played by Judy Geeson, who happens to be the only other outsider on the island.

As Shaw discovers the extent of the acromegaly outbreak, he also notes that the villagers are treating it as the inevitable outcome of generations of inbreeding. However, when Shaw investigates a navy dumping ground on the island's opposite shore, he comes across some industrial containers that don't belong there. After a run in with a Royal Navy Admiral (played by a clearly bored George Sanders in his final role), Shaw finds out that the containers come from a chemical company that was experimenting with pituitary growth hormone, and that hormone has made its way into the local fish population, which in turn has caused the acromegaly.

What's notable here is that Shaw faces little resistance to his investigation. Sure, he has to overcome local superstitions on the island, but that's about it. When he confronts the chairman of the chemical company and later employees of the private disposal company that's responsible for the dumping, they all just give up their information readily. Even on the island, most islanders come to agree with Shaw's scientific explanation for the acromegaly, and though some threaten violent resistence to outside interference, they all quickly give in. By the end, the movie feels like the X-Files if that show never had a Mulder--that is, Scully could just solve every mystery with her scientific expertise, and everyone would agree that she's right. Ultimately, everyon on Belf agrees with Shaw and submits to radiation treatment on the mainland. Science wins!

The film does try to create some tension, mainly through Ian Bannen's performance. Bannen, best known today as one of the old guys in Waking Ned Divine, is miscast in the movie, as he often flips the switch to righteous indignancy without much provocation. His character, Del Shaw, is new to the film, but the other characters working at Doomwatch headquarters, including Drs. Spencer Quist and John Ridge, all come from the TV series.

The TV series, which ran from 1970-1972, is much better, though only about half of the episodes survive. It does suffer from the low production values of 70s BBC series, but the plots were interesting and surprisingly prescient. Here's a clip from a slightly less prescient episode involving an infestation of giant rats. This is a long clip, but it highlights some of the key qualities of the series, which include some really fine acting by stars John Paul and Simon Oates. Doomwatch and Dr. Quist are feared by other government agencies because of their diligence and tenacity, often drawing comparisons to Nazis. That tension, unfortunately, is all but missing from the film. I also like the cold open of this episode, with the kid thinking that the giant rat is a pussycat. Also, the title sequence and theme music are pretty awesome as well.

Intrepid readers will find whole episodes of this great series floating around the internet, and they are well worth checking out. It would especially be nice if a DVD collection were made of the surviving episodes. In 1999, the BBC launched a pilot to revive this series, but it never panned out. The time certainly seems ripe for a revival of this series.
Posted by Dr. K at 10:14 PM