Last night, I covered the great story titles that appear in Marvel Comics' Where Creatures Roam 2 (1970). The first story in that issue, "I Spent Midnight with the Monster on Bald Mountain!" is a pretty amazing short, 5-page story by Steve Ditko. 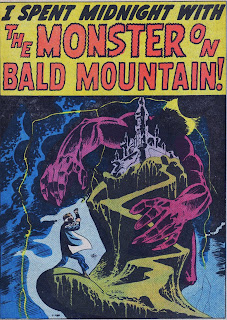 In fact, it stands as a pure Ditko creation, effectively presenting Ditko's objectivist philosophy in a hightly condensed form.

The story features an artist, Anton Gorge, who goes to work in "an ancient mountain castle in Central Europe" to work on his greatest creation: a sculpture representing the battle of good against evil. 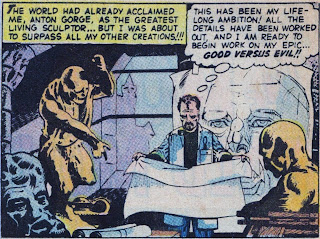 Gorge clearly serves as a Ditko analogue here, as Ditko used his comic work to achieve the same goals as Gorge's sculpture: the perfect representation of good versus evil.

Gorge is excessive in his realism, building the sculptures anatomically from the skeleton on. 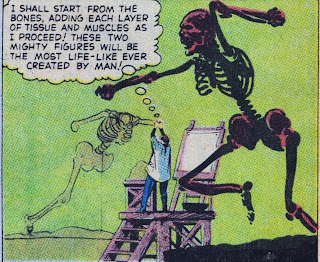 And finally, the masterpiece is completed.

Upon the completion of the sculpture, however, an electrical storm suddenly strikes, and an errant bolt of lightning causes the evil sculpture to come to life. 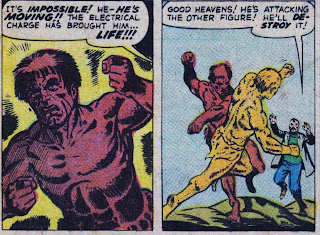 As so often happens in these situations, especially when they take place in ancient Central European castles, the creation tries to kill the creator. However, miraculously, the artist is saved by the good sculpture, which suddenly comes to life. 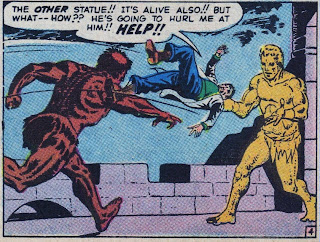 The two creatures fight, and both ultimately tumble to their death.

Despite the fact that both creatures have died, good does triumph over evil, as the artist is saved in the end.

This is an economical story to say the least. And while Ditko would express his objectivist philosophy more overtly in works like The Question and Mister A, "I Spent Midnight with the Monster on Bald Mountain!" demonstrates through allegory the connection between that philosophy and Ditko's goals as an artist. That the work itself is destroyed in the end could almost be read as prescient, considering Ditko's own struggles to produce work that remained faithful to that philosophy without being sabotaged by other forces.

For a much more detailed discussion of Ditko and objectivism, see Blake Bell's excellent Strange and Stranger: The World of Steve Ditko.
Posted by Dr. K at 11:22 PM