I normally shy away from doing end-of-the-year top 10 lists for a variety of reasons, the primary one being that, once the end of the year rolls around, I have difficulty remembering all that I did in the previous year. But 2008 was a great year for superhero comics, and so I thought I would put together a list of my favorites. So, below is a list of my favorite regular series and miniseries that I followed in 2008. Please feel free to make recommendations in the comments for things I should have listed or should have been reading. 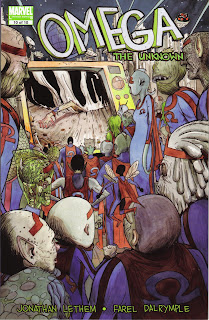 When Marvel announced that novelist Jonathan Lethem was going to revive this obscure 70s title, I immediately went to my collection to re-read the original Steve Gerber series. That series was one of the more bizarre of Gerber's many bizarre ideas at the time. I have to admit, I didn't always understand what was going on in Lethem's series from month to month, but when I read the entire series as a whole, it came together as an innovative riff on Steve Gerber's original 70s concept. I'm glad I stuck with it. And the final "silent" issue showcased artist Farel Dalrymple's talents. Congratulations to Marvel for putting out this unconventional series. 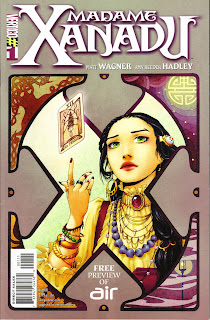 Though DC's Vertigo books would not normally be counted as "superhero" series, Madame Xanadu is the closest thing to a DC Universe title published by Vertigo. Writer Matt Wagner incorporates many aspects of the DCU in this series, including references to Jack Kirby's Demon mythology and frequent appearances by the Phantom Stranger (though his name is never actually mentioned). A recent appearance by Death from Neil Gaiman's Sandman series also shows Wagner's desire to tie the series into that corner of the Vertigo universe as well. Wagner appears to be quietly making this series the centerpiece of the Vertigo universe in a way that hearkens back to Vertigo's beginnings, when its books made the transition from the DCU proper. In that sense, it's clearly an attempt to return to Vertigo's roots and attract readers who may have been turned off by Vertigo's lack of a clear brand identity.

The development of the main character and the series's historical scope--moving from Arthurian England through the French Revolution--has continued to be surprising and engaging from month to month. But the real revelation here is Amy Reeder Hadley's art, which is just gorgeous and sumptuous in its detail. It would be wonderful if this series became the breakthrough hit that Vertigo has not had for a while outside of the Fables universe. I followed this series during World War Hulk, but I dropped it soon after. However, I heard such good things about it that I went back and picked up the collections and issues from this year. And now I'm hooked. Greg Pak and Fred Van Lente weave in mythology to reimagine the way gods and humans interact in the Marvel Universe. Their characterization of Hercules as a god doomed to repeat the same mistakes while still being haunted by them adds depth to a character who has generally been depicted as a blowhard, albeit an entertaining one. But, most of all, this is a fun book, and the writers have made me interested in a character that I had only previously cared about as the strong guy in the Avengers.

7. The Age of Sentry 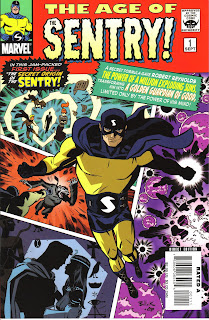 Speaking of characters I cared little about in the past...I liked Paul Jenkins's original miniseries about the Silver Age hero who had been forgotten by the rest of the Marvel Universe, but later appearances of the character in the New Avengers and elsewhere had made me wish that Sentry's first story had been his last. Now Jeff Parker and Paul Tobin have written a miniseries that presents Sentry's goofy Silver Age stories, recreating that milieu perfectly. Every issue has been more entertaining than the last, and I'm glad to see that Marvel has gotten smart by giving two of its best writers more work in 2009. 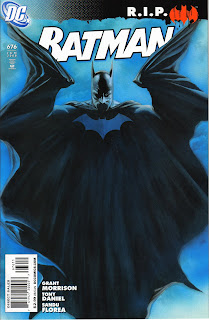 Lots of readers have complained online that this book was difficult to follow, especially during Grant Morrison's epic Batman: RIP story. But recent issues have shown that Morrison, like Batman, has had a plan all along, and subtleties that have been building for the last two years have all led to this story, which establishes exactly what a bad-ass Batman is. Unfortunately, DC has chosen one of this book's creative peaks to remove the main character from the title completely, leading in to something called "The Battle for the Cowl," for which I have no interest.

While Batman: RIP was an entertaining and complex read, it was nearly sunk by the art of Tony Daniel, who, while a dynamic artist, was inappropriate for this book. It often seemed like Daniel had difficulty understanding Morrison's script, and his storytelling often did not flow well. This, more than Morrison's script itself, may have caused the confusion that many readers felt, and it often seems to be a problem that plagues Morrison's books with other artists as well.

You raise an interesting question. (At least, it's interesting to me.) Who is the best artist for Morrison?

Great picks and commentary. This is actually the first I've heard of Madame Xanadu... I'll have to pick up the trade in July.