A reader named Ed, who came to my blog doing a search on Cary Bates, recently sent me an email asking me if I knew anything about a proposed James Bond comic series that Bates had pitched to DC in the late 70s, with Jim Aparo on art.

I had to admit that I never heard of this project, but I was immediately intrigued. Such a comic, had it existed, would surely be the single greatest comic series of all time (though its existence may just have been too awesome for this world to handle). At this time, both Bates and Aparo were at their creative peaks. In the mid-70s, Cary Bates had been hired by Cubby Broccoli to write an early script for the Bond film The Spy Who Loved Me, though that script was rejected, along with many others in that film's chaotic pre-production history. Clearly, Bates was well-situated to write this series.

Also, as detailed by Marty Pasko in a recent Word Balloon interview (which is great, by the way), DC long owned the license to James Bond, though they did nothing with it other than the weak Dr. No adaptation that appeared in Showcase. It's interesting to note, then, that at least someone was trying to do something with that license at DC.

Ed mentioned that his source for this story was an article in the 70s and 80s fanzine, The Comic Reader, which had been created by Paul Levitz and Paul Kupperberg. After I sent out some queries to my fellow comic bloggers, the amazing Mike Sterling was able to get a scan of Aparo's cover image that accompanied the original proposal. 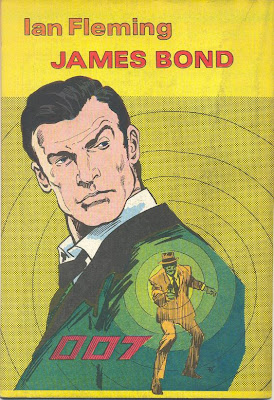 This image originally appeared in The Comic Reader 180 (June 1980), though Mike informs me that the image is the only item in the issue related to the Bates/Aparo Bond series. Perhaps the article appears in an earlier issue.

Aparo's Bond looks like a cross between Aparo's Bruce Wayne and Sean Connery, which is exactly as it should be.

I'm now curious to find out more about this series, especially why DC didn't move forward with it. Anybody out there with more information on this, please let me know.
Posted by Dr. K at 1:24 PM

Thanks for this post. I wish I'd known about this while doing the research for my book on the history of Bond in comics. [JAMES BOND: The History of the Illustrated 007 - (Hermes Press)]

I talked to a few people at DC about their tenure with the Bond license, but no-one mentioned this.

I'll be doing some more digging to find out what I can.

That illustration of Bond is epic.

The Gazette (as featured in the link) regularly presented the UK James Bond comic strip and sometimes solicited covers from artists otherwise unconnected. Example-They also ran the daily Spirit strips at one point and had a Dick Giordano cover. As I recall, they ran several Aparo covers. Any chance that Aparo's 007cover was not actually associated with DC at all but was just solicited by Street Enterprises?