Batman in "The Peril of the Penguin"

While digging through some old boxes in my closet recently, I found a ziplock baggie filled with some minicomics that I must have accumulated when I was a kid. Several of them are small DC Comics that came inside packages of Super Sugar Crisp back around 1979-80. Each comic is 16 pages, with two panels per page. I'll spend the next few posts going through some of these odd novelties.

The first one, "The Peril of the Penguin," is a perfect little Batman story in which the Dynamic Duo stop The Penguin from robbing a rodeo. 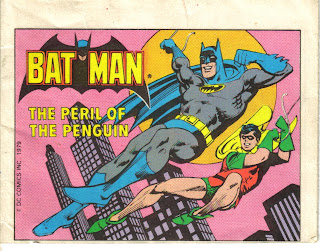 I can't find any credits for this comic online, but I'm going to take a guess that the art is by Adrian Gonzales and Dave Hunt (I'm pretty certain on the inker, but not the penciller). The cover is by Dick Giordano (at least the inks). I don't have a clue as to the writer, though at this time Bob Rozakis was writing a lot of stuff like this for DC, so I'm going to make that my guess.

The story opens in typical fashion for the time, with Batman scaring and beating up some thugs for information. 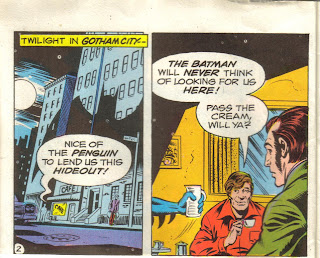 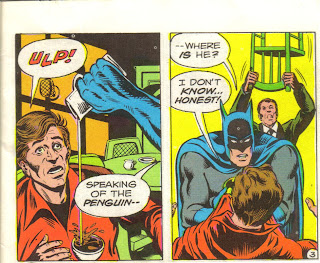 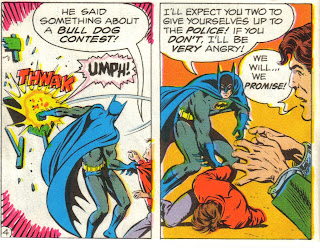 He's so effective at this that he doesn't even have to take them to the police--he just scares the crap out of them so they do it themselves.

The thugs give him a vague clue that the Penguin is at a "Bull Dog Contest." Robin jumps to the logical but dead wrong conclusion that this means he's going to rob the Gotham Dog Show (which, in the world of Gotham City in the 70s, makes perfect sense). Instead, Batman points out that a "Bull Dog Contest" is slang for a rodeo. From then on, Batman will not shut up about how right he is all the time. 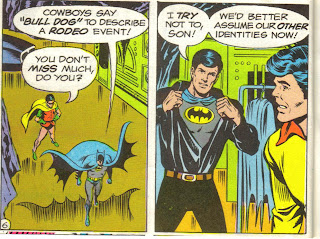 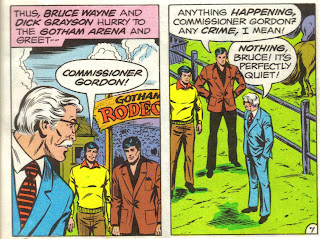 I like how Bruce gets down to business and makes sure that Commissioner Gordon understands his question here. This isn't idle chit-chat as someone, using the vernacular of the times, might ask "What's happening?"

The Penguin, inconspicuously disguised as a cowboy, uses one of his trick umbrellas to rile up the bulls and start a stampede: 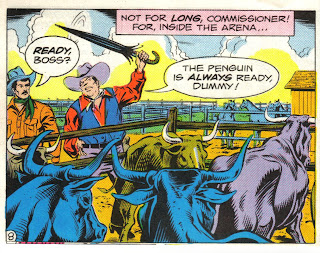 This calls for Bruce and Dick to get in on the action: 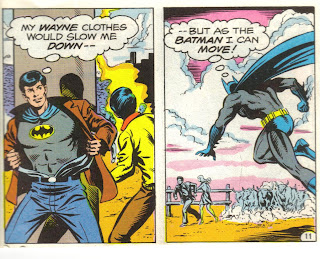 "But as the Batman I can move!": whoever wrote this deserves a medal for that line alone.

And we end up with one of my favorite things: Batman interacting with members of the animal kingdom. First, with the steers: 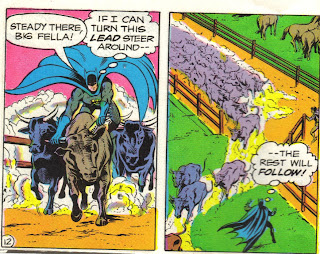 Second, on a horse: 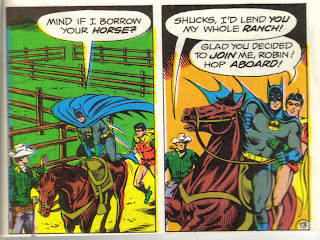 Finally, Batman and Robin catch up to the Penguin and his henchman at the rodeo box office. Penguin tries to get away with a helicopter umbrella, but Batman manages to lasso the criminal's feet: 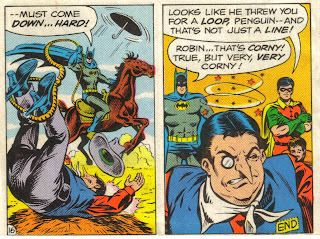 Leaving Robin to make a series of demoralizing puns at the Penguin's expense.

In the span of 29 panels, "The Peril of the Penguin" provides a formula for the basic Batman story: Batman interrogates punks, punks give up clue, Batman decodes clue and tracks down the villain, fighting ensues.
Posted by Dr. K at 12:16 AM

Take a look at that panel of Bruce Wayne and Commisioner Gordon talking, and then say that Gordon doesn't know that Bruce is Batman. Go on, I dare you.

I love how Batman pulverizes a chair with one punch worthy of Superman. ;-)

"And we end up with one of my favorite things: Batman interacting with members of the animal kingdom."

Yeah, but seeing as how those interactions usually wind up, I feel kind of cheated he didn't halt the stampede by just punching the lead steer unconscious.

I anxiously await your thoughts on "Batman and Robin."

Neat! Why little giveaway comics like this went the way of the dinosaur, I have no idea...