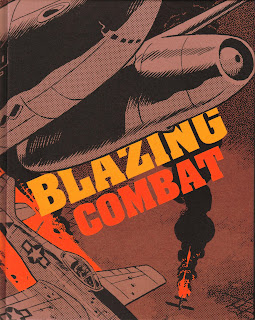 Holy crap, this book is awesome!

In 1965, Warren Publshing sought to build on the success of their horror comic magazine Creepy. Since Creepy was modeled after the the EC horror comics of the previous decade, the decision was made to duplicate another famous EC genre: war comics. The result was Blazing Combat, written by Archie Goodwin and drawn by some of the greatest artists in comics history, including Wally Wood, Alex Toth, Joe Orlando, Gene Colon, Reed Crandall, John Severin, and Russ Heath.

The series, unfortunately, only ran for 4 issues, and the book spends some time explaining the series's downfall through interviews with publisher James Warren and writer Archie Goodwin. In brief, Goodwin took a critical, realistic approach to war stories, including stories about the Vietnam War, which was then in the early days of American involvement. These Vietnam stories, which anticipated the country's antiwar sentiment, raised the ire of the US military and the American Legion. The military stopped the sale of the comic on all military bases and the American Legion encouraged wholesalers to keep it from newstands. Thus, after only a few issues, Warren had to pull the plug.

What made it into these four issues, however, are some of the greatest war comics ever made. In reading this collection, I was struck not only the progressive attitude toward war that these stories present, but also the breadth of stories told here. Each issue includes stories ranging from the American Civil War to Vietnam, and, with the exception of World War II, rarely is a historical period repeated in an issue. Each issue contained 7-8 short stories. When these stories are presented collectively like this, Archie Goodwin's accomplishment here can be seen as on par with Harvey Kurtzman's work on the EC war books.

I was also amazed at how well these stories hold up after more than 40 years. Warren published its comics as magazines in order to circumvent the censorship of the Comics Code, so while the level of violence depicted here may be higher than that acceptible in mainstream comics of the time, it is by no means gratuitous. The Vietnam stories are probably the most remarkable. The opening story of the series, "Viet-Cong" (with art by Joe Orlando, who draws most of the Vietnam stories) features an American soldier advising the South Vietnamese army and witnessing the murder of civilians and the torture of enemy soldiers (including waterboarding).

If anything unifies these stories, other than the focus on war, it is a dominant sense of irony. Stories of military heroism are rare, and when they do occur, they are often balanced by this irony--in one Revolutionary War story, the heroism of an unnamed general is celebrated, and we only find out at the end that it's Benedict Arnold.

Among my favorite stories are those involving fighter pilots in various wars, especially those stories drawn by Alex Toth and Wally Wood. Toth drew what is probably my all-time favorite war comic story--"F-86 Sabre Jet!" in EC's Frontline Combat 12. Toth's "Lone Hawk" and "The Edge!" are easily on par with that earlier story, and "The Edge!" itself forms a perfect companion piece, where Toth uses a deceptively minimalist style to tell a gripping story of Korean War fighter combat. Wally Wood did two amazing fighter pilot stories: "The Battle of Britain!" (which he wrote--the only story in the collection not written by Goodwin) and "ME-262!" The latter story is especially remarkable because it tells of the frustration of a German pilot in WWII who knows that the new Messerschmitts should be used as fighters, while Hitler keeps insisting on making them bombers.

Probably my favorite story in the collection, however, is "Give and Take," with art by Russ Heath. Heath has always been one of the greatest war comics artists, but this story goes well beyond any of the work he did in DC and Atlas's war comics. The art is almost photo-realistic here, especially in the use of shadows and evocative facial expressions.

In all, this is an essential collection, featuring truly important stories from an unfortunately brief period of incredible creativity on the part of Archie Goodwin and a stable of some of comics' greatest artists. Fantagraphics has been knocking out a lot of great archival collections lately, including Paul Karasik's rediscovery of Fletcher Hanks's work, Craig Yoe's collection of bizarre Boody Rodgers stories, Greg Sadowski's Supermen anthology, and the complete, essential collection of Harvey Kurtzman's Humbug series (not to mention the work they are doing on comic strip archives).
Posted by Dr. K at 9:32 PM