ISBook Club: Hunt at the Well of Eternity 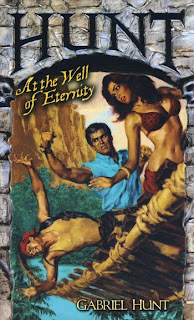 So, as Chris Sims recounts here, he and I have decided to start a cross-blog book club with the first installment of the Hunt for Adventure series, Hunt at the Well of Eternity, written by James Reasoner.

Much like Chris, I was excited to hear about this series about a treasure-hunting hero named Gabriel Hunt when series creator Charles Ardai announced it. Ardai is the creator of the Hard Case Crime series, which I've been enjoying tremendously for the last few years. Unfortunately, the first book in the series doesn't live up to those expectations, but I'm going to stick with this series in hopes that it does live up to its potential.

I agree with Chris on most points. I also wish that the book used first-person narration, especially since "Gabriel Hunt" is listed as the author, and I also found the contemporary setting off-putting. And, in the end, Gabriel Hunt is too much of a generic adventure hero to care much about. But, as Chris also points out, the book moves along at a fast clip, with one action set-piece following quickly after another--in the first 40 pages, we get a fight at a museum benefit, a car chase across the Queensboro bridge, and an airboat chase through the Florida Everglades, all with considerable gunfire.

The book could also benefit from a more self-aware, ironic approach. Hints of that occur in the suggestion that Gabriel learned to use a bullwhip from a friend of his parents who may have been Indiana Jones. In fact, my hopes for ironic self-awareness came in the first page, when we're introduced to Gabriel's brother:

His brother Michael leaned closer to him. Without altering the beaming smile on his face, Michael said from the corner of his mouth, "Stop fidgeting."

I would think, if you named a character "Michael Hunt," you would absolutely have to know what you were doing. And if so, then the reader should expect much of the novel to be written with the tongue planted firmly in the cheek. However, that is really not the case here, and Reasoner writes the rest of the novel with such a bland earnestness that it seems as if he were willfully avoiding ironic self-awareness. Take, for example, the turgid prose used in the introduction of the novel's damsel-in-distress, Mariella Montez:

A mass of midnight-black curls framed a compelling, high-cheekboned face dominated by dark, intense eyes. Those curls tumbled over honey-skinned shoulders left bare by the strapless evening gown of dark green silk that clung to the generous curves of her body. She possessed a timeless, natural beauty that was more attractive to Gabriel than anything the multitude of stick-thin, face-lifted society women attending this reception could ever muster.

This may as well have said "generically attractive Latina," as there is very little here to give us much of a picture of the character, though that's par for the course with most characters in this novel. Reasoner may be intentionally resisting the kind of postmodern irony that accompanies many nostalgic genre revivals, but the bland style used here does not serve as a worthwhile replacement.

Reasoner, best known for his Westerns and Civil War novels, as well as the Mike Shayne mysteries that he wrote as "Brett Halliday," would seem perfectly suited to this kind of adventure tale. And the author does bring his historical expertise to a plot involving the quest for the fate of a Civil War general who disappeared under mysterious circumstances. But apart from strong pacing and action scenes that make the story mildly diverting and inoffensive, there isn't much to recommend here.

Later installments in the series do offer some promise, though. If the preview in the back of Well of Eternity is a sign, then the next novel, Hunt Through the Cradle of Fear by series creator Charles Ardai, should be a lot more fun. Ardai's contributions to the Hard Case Crime series, notably Little Girl Lost and Songs of Innocence (writing as "Richard Aleas"), are both fantastic crime novels, and he clearly has a love for these pulp genres. Also, Christa Faust and David J. Schow are both lined up for the series, and they wrote my two favorite Hard Case Crime novels: Money Shot and Gun Work (respectively). Both of these novels are fun and fast-paced, with strong characterization and some pretty wild twists. So, while I was disappointed in Hunt at the Well of Eternity, I hold out hope that this was merely a mild abberation, and that the series will live up to its potential.
Posted by Dr. K at 4:37 PM

Since you mentioned the Civil War-inspired plot, I'll mention here that that's another thing that I felt let-down about. I'm not saying that Reasoner necessarily needs to demonize everyone who fought for the Confederacy, but General Fargo's change of heart once he got to Mexico and saw how hot the women were is, as you said, a whitewashing that feels cheap. Same goes for the references to the Confederate Flag as something that's (and I'm quoting from memory here so forgive me) "not too popular these days," due to its adoption by White Supremacist groups, as though a Southern General from the 1860s would be as uncomfortable about the idea of "White Supremacy" as a New Yorker from 2009.

The idea that a man who refused to surrender when Lee did and went so far as to leave the country so that he could come back and overthrow the government would abandon those plans such a short time later seems like another example of Reasoner playing it safe instead of cutting loose in a more entertaining manner.

After all, if you can't have cartoonish exaggerations in pulp novels--and there are plenty of those in other characters--then where can you?

Despite the lukewarm reviews, I'll be reading this book. I think it's interesting that it was put in a modern setting, but it sounds like maybe it wasn't handled as well. One of the things I found interesting about Little Girl Lost was that it was a Noir Detective story done in the modern day. That was off putting to me at first, but then I realized it was time to bring the genre to modern times.

This was probably done elsewhere, but it was the first time I came across it.