Back in my undergraduate days, I had a professor in an upper-level English class who frequently used the term "dichotomy" in his discussions of the conflicts at the heart of various works of literature. This excited me because the concept was easy to grasp intellectually, while seeming to be universally applicable. I picked up on this term quickly, and I managed to plug it into most of my undergrad lit papers with considerable success, as in "The Dichotomy of Masculine and Feminine in Henry James's 'The Figure in the Carpet'" or "The Reason/Emotion Dichotomy in Shakespeare's Sonnets." This binary view served me well throughout those years because it was an easy system through which I could generate lit papers, and I imagine most English majors come up with similar systems. They are easy, efficient, and neat, and they make life a lot easier.

I bring this up because I was reminded of that undergrad epiphany while reading David Mazzucchelli's Asterios Polyp. 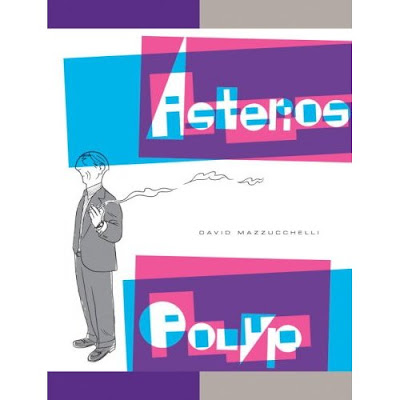 The title character is an academic who applies such a binary view not only to his area of study--architecture--but also to his entire life. Everything fits neatly and rigidly into an either or system: architectural design is either linear or plastic, his students either can't draw or can't think, art is either factual or fictional, etc. He uses this system especially to show off his intellectualism in fields outside of his primary area of study, like literature and music, and, most of the time, his intellectual pronouncements make him the center of attention at parties and other public gatherings. Aside from being full of shit, he so rigidly adheres to this system that he allows for little disagreement without ridiculing his opponents, and he is a total failure when it comes to human connections. He's an insufferable asshole, to say the least.

There may be, however, a genetic basis for Asterios's rigid binarism. He is the only surviving member of a set of identical twins--his brother Ignazio died in uetero. However, Ignazio's presence is felt throughout this graphic novel, as he serves as the story's narrator and he frequently appears in Asterios's dreams. Asterios seems to feel Ignazio's presence as an inherent part of his own dual nature.

At first, Asterios comes across as the kind of character, typical of Chris Ware or Dan Clowes, for whom the reader finds difficulty generating sympathy. During his academic career and his marriage to the sculptor Hana, he is such a pompous, insufferable jerk that it's easy to see why he ultimately finds himself alone. However, Mazzucchelli makes a wise choice in his narrative structure. The story opens with Asterios at his lowest point: his apartment is a mess, dishes pile up in the sink, overdraft and past due notices overflow on his desk, and Asterios is lying in bed watching homemade sex tapes. Suddenly, lightning strikes his apartment building and fire breaks out. Asterios quickly grabs shoes, a lighter, a watch, and a Swiss army knife. Everything else he owns goes up in flames.

From this point on, the narrative shifts between flashbacks to Asterios's past, narrated by his dead twin brother, and his life after the fire, as he gets on a bus and tries to start a new life at an unknown destination. So, we get to see his descent into isolation parallel with his recovery (and in case we didn't figure that out, his reahbilitation takes place in a town called "Apogee"). Time shifts in the narrative are cued primarily by changes in the color scheme: blue, purple, and red indicate flashbacks (red is the color primarily associated with Hana), while the more contemporary events and dream sequences appear in yellow and purple (interestingly, no black ink is used in the book).

In Apogee, Asterios meets Stiffly Major, a local mechanic looking for an assistant. Despite having no mechanical experience, Asterios gets the job, and he quickly goes to the library to study up on auto repair. Stiffly also provides Asterios with a room at the home he shares with his wife, Ursula, and their son. Ursula, a devoted spiritualist and earth-mother figure, presents perhaps the greatest challenge to Asterios's cynical, binary world view: she organizes his room based on his astrological sign, which, for some reason, means that the table needs to be upside down and a chair is turned on its side. In his previous life, the Majors--and the entire population of Apogee, for that matter--would be targets of Asterios's caustic wit and ridicule, if he noticed them at all. In his new life, however, he accepts their odd, mismatched, chaotic life. If the narrative had been structured in such a way that it built toward that acceptance, the reader might have more difficulty caring about Asterios's arc. With the parallel narratives, we seem to be reading about two Asterios's, which feed into the theme of duality that drives this work.

I'm not sure, though, what to do with the final scene of the book. It may ironically endorse Asterios's earlier cynical world view that he has abandoned. If that is the case, then Mazzucchelli steers back into Clowes and Ware's territory. It requires more thought, but I would like to be able to recuperate this ending into my overall positive feeling about the book.

I'm also not entirely prepared to call this the great graphic novel that other reviewers have called it. It's certainly very good, and formally innovative (in fact, I need to spend more time thinking about the formal elements of the work, as there is much more going on there than I've indicated in this review). But as a story, it seems more in line with works by Updike, Roth, Cheever, and others that explored the life-changing epiphanies of white, male, suburban intellectuals in the 60s and 70s. That's not necessarily a criticism of the work itself, because it is absolutely worthy of praise, but it just may not be the transcendent work of literature that many hope it to be.
Posted by Dr. K at 6:00 PM

Nice review. Does the book seem to recommend that academics switch over to auto repair as a way to ground themselves in manual labor after losing themselves in a life of abstraction? I keep running into that theme recently, as in that Shop Class as Soul Craft book by Matthew Crawford.

Nice review. I agree with most of what you said. I think that there hasn't been another graphic novel that has presented a character in such complexity. The way that dreams, flashbacks, and random vignettes are melded into our knowing of Asterios is very subtle and organic, even though much of the story and the characters are artificial.
The book is certainly worth reading, if for nothing else than to enjoy the artwork, which mixes in traditional graphic art style with elements that I think were picked up in art school.

That's a good question. I don't know that Mazzucchelli is making any generalizations about academics through Asterios, but the dichotomy you describe is definitely at work here. Asterios is a "paper architect," so none of his designs have ever been produced, and it is only through auto repair that he manages to make something useful.