When I was 7 years old, I had a friend named David who made his own comics. They would appear as strips in a weekly newsletter that he produced, and his dad would make copies for him at work on a copying machine, which was a bit of a novelty back then in the mid-70s.

I don't remember specific plots of David's comics (one featured Wonder Woman, while others were original creations). I always got the sense, though, that David was making up his stories as he went along, with no clear plan from the outset. In fact, he would get very mad at me if I asked any questions about the direction of these stories. Also, I do remember that the comics featured an unambiguous, clearly defined morality, with strong, violent retribution against evil-doers, which is how his stories always ultimately concluded. 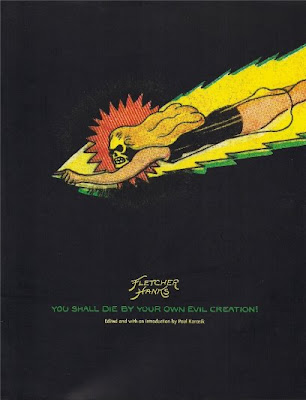 I bring this up because I was reminded of David's comics while I read the second Fletcher Hanks collection, You Shall Die by Your Own Evil Creation. Most of those who read these Hanks collections come away with a feeling that the creator was disturbed, even if one doesn't read editor Paul Karasik biographical material on Hanks.

However, I was struck by another similarity between Hanks's work and David's juvenalia: the sense that both were just making things up as they went along. The endings of Hanks's stories are inevitable--evil is brutally, and often fittingly, punished by the hero--and yet the stories give the impression that the specific climax did not occur to Hanks until he put his pencil to the final page. In these climactic panels to one Stardust story, Hanks just crams in a conclusion into these small final panels:

In a Space Smith story, Space tells his girlfriend, Dianna, to start pulling every lever and pressing every button on the control panel of the villain's ship--a plan which turns out to work.

Also, whatever complications might ensue during the adventure are quickly and suddenly dispatched. For example, Space Smith might suddenly face the danger of "rays" from his Martian enemies, but luckily his ship has "anti-ray" resisters (Stardust also falls victim momentarily to "anti-ray" weapons in another story). In other cases, the superheroes Stardust or Fantomah will suddenly have the perfect power to counter the enemy, despite never having manifested that power in previous stories. There is absolutely no need in Hanks's world to explain an "anti-ray" resister or an "anti-Earth" weapon--they are simply momentary obstacles or benefits toward the inevitable outcome.

I mean none of this commentary as negative criticism. Part of the fun of reading Hanks's work, beyond the unlimited number of WTF moments throughout each collection, is the deconstruction of the creative logic behind these stories.

There is, therefore, also an endless supply of blog fodder in the Fletcher Hanks collections. One story that stands out, in particular, is the single appearance of "Tiger Hart," originally published in Planet Comics 2 (Feb. 1940).

Right off the bat, I love the title box for this story: "Tiger Hart of Crossbone Castle on the Planet Saturn." My guess is that Hanks created Tiger Hart independently, as a Prince Valiant knock-off, and then when the story was bought for Planet Comics, "on the Planet Saturn" was arbitrarily added to make the story fit the book's narrow genre confines. Nothing in the story indicates the necessity of a Saturnian milieu.

This story is also different from others in this collection, in that the level of detail in each panel composition is much higher than normal. In many other stories, the reader can clearly see the point at which deadline pressures got to Hanks: backgrounds become nonexistant, characters are only visible in silhouette, and, in the most extreme cases, a panel consists simply of a starburst explosion. In Tiger Hart, however, the art and composition remain consistent throughout: 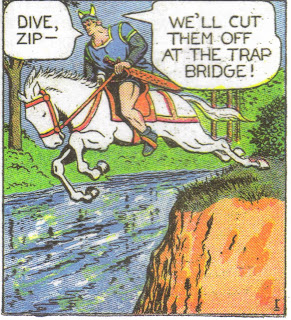 That doesn't mean, however, that the story isn't batshit crazy.

Tiger Hart is trying to recover the Great Solinoor diamond, which has been stolen from Turk the Terrible by a gang of robbers. For some reason, Turk has also kidnapped Queen Hilda in order to get the diamond back, which doesn't seem to be a well-thought-out plan. Tiger, therefore, must recover the diamond and rescue the queen, thus putting him at odds with two separate groups of enemies.

First, Tiger and his trusty horse, Zip, defeat the robbers. Then, the hero tries various methods to recover the diamond: 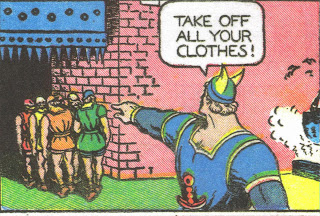 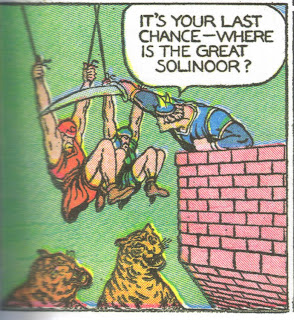 The latter method works (though the former does give us a hilarious out-of-context panel), and Tiger recovers the diamond, which was hidden under the mane of a horse. Tiger then goes on to rescue the queen from Turk the Terrible, only to come face-to-face with Turk's most dreaded enforcer, the Talon Man. In typical Hanks fashion, the Talon Man is introduced and dispatched in three panels:

Also, we shouldn't feel too sorry for Talon Man, as he did murder a cripple, though that particular plot point is only introduced in the above panel.

Tiger gets the queen to safety, and the story abruptly ends with these two panels, where Tiger destroys the troublesome diamond: 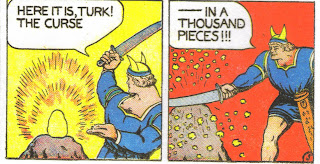 This conclusion again leads me to speculate on the creation and publication of this particular story. It seems as if a page is missing because Tiger still has to face the final confrontation with Turk's men. Also, the story is only 5-pages long, while the rest have no fewer than 6 pages. I would guess that Planet Comics 2 ran 5 pages short, and the editors purchased this story from Hanks to fill that space, lopping off the final page, where the story would come to at least some conclusion.

This is all, of course, speculation, but there is something about this collection--the varying degrees of artistic quality form story to story, the unconventional panel layouts, the formulaic yet off-beat plots--that invite such speculation on the creative decisions made behind the scenes. Fletcher Hanks was a unique creator working at a unique period in the history of comics, and that intersection of artist and history makes for fascinating reading.
Posted by Dr. K at 11:58 AM

Wow! It appears that someone else has given this story the same close read that I have and come to many similar conclusions. I agree with your thoughts on Tiger Hart and suspect that it was done, like so many early comic book stories, as an audition piece for syndication...the most prestegious job for a cartoonist of that era. Many Hanks stories are illogical, but the plot here is so episodic in its logic that it stands out as another kind of story completely.

Thanks for the kind and thoughtful words and for getting the word out on this man whom no less an expert than R. Crumb called, "A twisted dude".