EC Comics and the "Improvement" Theory of Literary Criticism

One of the more common types of responses my students give to literary works falls under the category of what I like to call the "improvement" theory of literary criticism.

The improvement theory stems from a worldview that nothing, not even the timeless classics of world literature, is truly perfect, and the best way to engage with a literary work is to offer suggestions that would make the work better. Most often, such critical examination begins with the phrase, "This story would be better if..." For example, "Hamlet would be better if Hamlet just quit talking about it and killed his uncle"--this is the most common critical position on Shakespeare's classic tragedy. Or, to give an example from one particular student, which consists purely of ungrammatical but concise fragments: "Dr. Faustus: not enough drifting. FAIL!"

There are three main goals to this school of criticism--areas where even the most classic work requires some improvement:

Readers of Virginia Woolf's modernist novel Mrs. Dalloway often find themselves responding with critiques about the title character like, "She just needs to get laid" (thus fulfilling all three goals), or "She just needs to get over herself" (a common reaction applicable to most works of literature. See also The Awakening and "The Yellow Wallpaper"). With both main characters of the novel, Clarissa Dalloway and traumatized Great War veteran Septimus Smith, a common reaction is "They just need to take a Prozac."

I bring all this up not only because a new academic year is about to start, but also because I believe that I've found a precedent for this school of criticism while I was reading through some old EC comics. Specifically, I came across Graham Ingels's adaptation of Edgar Allen Poe's "The Cask of Amontillado" from Crime SuspenStories 3 (1950), which makes some valuable changes to Poe's classic tale of suspense. 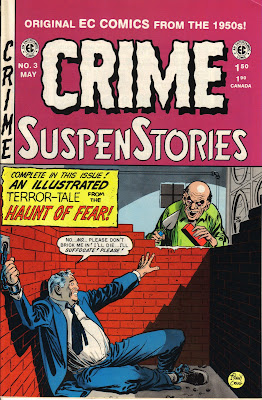 The first improvement the EC creators made was to the title: 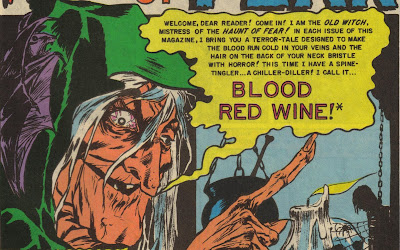 I especially welcome this change because students often struggle pronouncing "Amontillado," and changing the title just eliminates that problem all together. Also, the narrator is no longer the killer Montresor, but is now the Old Witch from the "Haunt of Fear" feature.

Another improvement is the introduction of a gun. This definitely helps fulfill goal 2.

Finally, we have the messy problem of the conclusion to Poe's story. In the original, Montresor--the narrator who seeks revenge on an insult from Fortunato--walls up his victim in some catacombs used as a wine cellar, and then he reveals that he is telling the story 50 years after the fact, thus confessing that he got away with murder a half-century ago. This is not a very tidy conclusion, and students are often appalled that justice could so easily be circumvented. 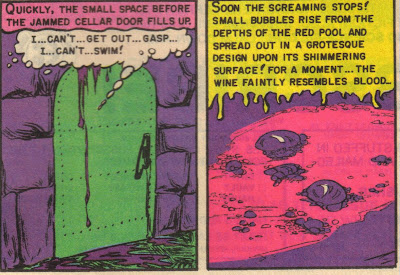 "Blood Red Wine" fixes this problem in typical EC fashion: the bullet shot earlier in the story struck a cask of wine, causing a chain reaction that leads to a wine flood. The murderer finds himself trapped in the cellar, giving the story a satisfying ironic twist that is lacking from Poe's original work. Also, note how the wine bubbles in the form of a skull--just so you can be 100% certain that the killer died.
Posted by Dr. K at 8:40 PM

There's one part I don't understand.

You're letting students express opinions of great literature? Surely they should passively receive wisdom and bask in the greatness of the works.

Others definitely walked in the footsteps of Albert Feldstein.

Archie Goodwin & Reed Crandall's version of "AMONTILLADO" also ended with the killer getting drowned years later when he went to inspect his long-ago handiwork, the walls collapsed. CREEPY #6 (Warren / Dec'65)

But perhaps most fascinating was the October 11, 1949 TV episode of "SUSPENSE", which starred Romney Brent as Montressor, and Bela Lugosi as Fortunato. In that, Montressor puts Fortunato through school so he can take over running his vast estate. Fortunato repays this kindness by joining the Fascists before WW2, then as a soldier, cofiscating his propetrty, forcing Montressor & his wife to live in a small part of their own castle, and as if that wasn't enough, having an affair with Montressor's wife (apparently a common detail in MANY later versions), then planning to murder him in his own wine cellars! In this one, Montressor winds up killing Fortunato in SELF-DEFENSE, and hides the body so the army won't come after him. He waits until after the war before he relates the entire incident to an American soldier, played by Ray Milland, who steals the picture!

Other examples include Johnny Craig's variation on "THE BLACK CAT", in which the wife is a total BITCH who's virtually begging to be murdered. THE HAUNT OF FEAR #15 [1] (Warren / May-Jun'50)

Then there's Tom Palmer's "THE TELL-TALE HEART" (dialogue by Denny O'Neil) in which the old man is such a complete BASTARD we're supposed to feel sympathy for his killer. CHAMBER OF DARKNESS #3 (Marvel / Feb'70)

My favorites of course include the various Roger Corman adaptations, such as "HOUSE OF USHER" (1960) in which Richard Matheson retains the story structure while turning it completely upside down, by adding romance and making Roderick a villain who deliberately buries his sister alive, allegedly "for her own good!"