Remember that Time that Batman Almost Fathered the Master Race?

In doing the extensive research required to bring you the weekly Gil Kane punch, I often have to read through Gil Kane stories that are surprisingly punch-free, or, at the very least, light on the distinctive punches that I need. Nonetheless, this research often bears fruit in other ways, as when I recently re-read one of my all-time favorite Batman stories: "Flyer" from Batman: Legends of the Dark Knight 24-26 (1991-92), written by Howard Chaykin, drawn by Gil Kane. 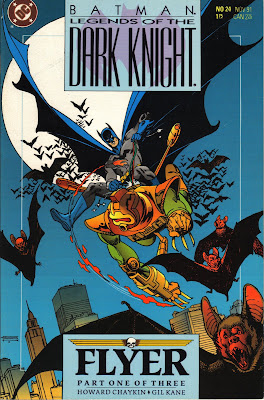 When this story first came out, I had already been a long-time fan of Howard Chaykin's work, especially American Flagg!, which I read when it was first published, despite the fact that I was probably way too young to read it. Needless to say, I was excited to see Chaykin's take on Batman. And this is definitely a Howard Chaykin Batman comic. 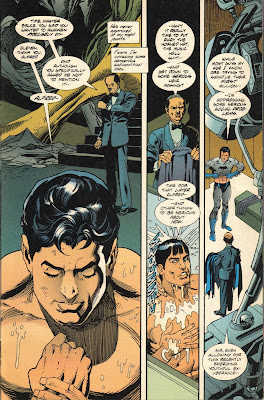 "Flyer" opens with an apparently naked Bruce Wayne meditating in the Batcave, when Alfred interrupts to inform him that meditation time is over. The story takes place 18 months after Bruce first appeared as Batman, and Alfred is still treating this like a phase his employer will soon be over. Alfred asks, "Isn't it really time to put away the horned hat, the music hall suit, and get down to some serious heir making?" As we'll see, there is a nice little bit of foreshadowing in Alfred's question. Also, I like that Alfred wants to see Bruce Wayne make some babies.

Bruce blows off Alfred and heads off on patrol instead. After stopping the mugging of a husband, wife, and young son that look oddly familiar, Batman is attacked by a strange, mechanized flying man. Batman defeats him, and in a pretty stupid move, he takes the flyer to the Batcave for study. There, Batman administers sodium pentothal in order to get this guy's story.

It turns out that the flyer is Curtis Eisenmann, whose parents were an American Army officer and the daughter of a Nazi rocket scientist. Anyone who has ever read anything by Howard Chaykin will know that he's got a real thing for Nazi women, so when he introduces Brigit Eisenmann, we have a pretty good idea where this is going.

After her own father died in American custody, she continued his scientific research for the American space program, which was one of the few areas of employment available to Nazi immigrants in postwar America, and thus, there weren't a lot of "Nazis are stealing our jobs" protests at the time.

Being a Nazi and all, Brigit Eisenmann turns out to be a pretty terrible mother. She treats her son like some kind of genetic mistake, so in order to prove himself to her, he becomes a helicopter pilot for the Gotham City police department (huh?).

He has the bad luck to be on the job the night the Gotham PD goes after Batman, as seen in Batman: Year One. The swarm of bats Batman calls up cause Curt's helicopter to crash, leaving him maimed and barely alive. His mother, always ready to to make lemonade out of her worthless failure of a son, decides to use him for her latest cybernetic experiments, and she commands him to capture Batman, with the promise that once he proves himself to her, she will work to make him normal again.

At this point, with all this exposition out of the way, the story moves into batshit crazy Howard Chaykin territory. You see, Brigit Eisenmann has been watching reports of Batman on TV, and these reports have been stirring up feelings in her that she hasn't felt in years.

So, she plans to capture Batman in order to rape him and then breed the perfect Aryan human.

You know, there are many times I say to myself, "They don't make Batman stories like this anymore," but that's mainly in nostalgic reference to Bob Haney Brave and the Bold stories or great Denny O'Neil stories where Batman clocks a bunch of thugs with a bag full of ocelots. This is the only time I've said it in reference to a story where Batman is threatened with rape.

"Mrs. Eisenmann, are you trying to seduce me?"

And, to make matters worse, Mrs. Eisenmann totally fails at the dirty talk.

Clearly she's out of practice, but to be fair, that incest shit used to knock 'em dead back in the Fatherland.

With her efforts to arouse him yielding no results, she decides to get rough. 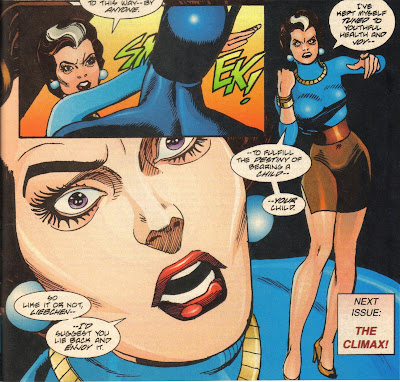 Yes, Chaykin actually has her say, "Lie back and enjoy it."

Wait a minute! What did that next issue box say? 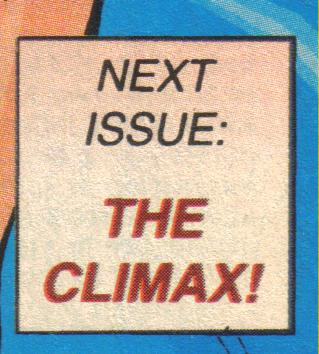 
That being said, this story does provide us with one of the great lines in Batman history: 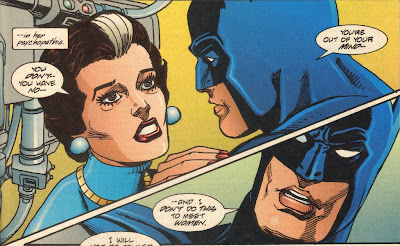 Instead of getting down to business, however, Brigit proceeds to torture Batman in order to make him more compliant. It seems that this is her version of foreplay. 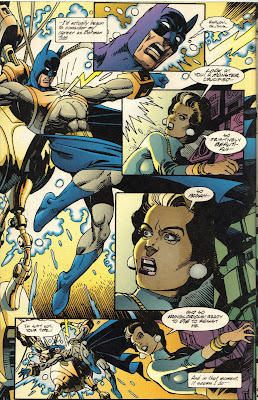 Batman's been crucified and electrified, but he still manages to come up with just the right thing to say.

Also, I love Batman's narration on this next page. 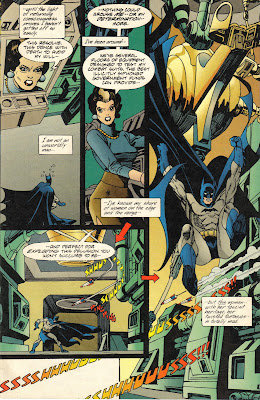 Of course Bruce Wayne likes his women a little crazy, but he draws the line at Nazis.

Curt, who feels neglected because his mother is devoting so much attention to her new beau, enters the torture chamber and decides to get all Oedipal up in this place. 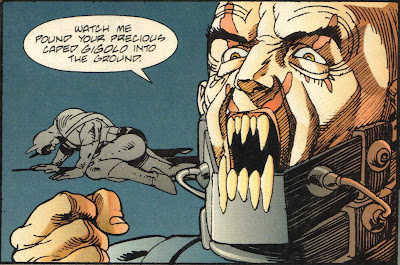 Anyway, Batman proves to be more of a man than the Eisenmann family can handle, and he escapes as Curt self-destructs, taking his mother with him. Batman decides, at this point, that his caped-crusading days are no longer fun, and he goes off to compose his letter to Penthouse Forum, from which we get this story's narration.


By the way, Batman, what's you're favorite Rolling Stones song? 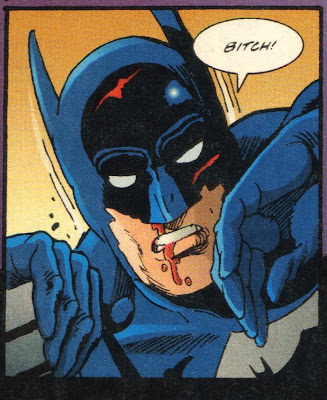 Y'know I read this when it came out and my only two memories are that it was the first really unremarkable LotDK story, and also that it was refreshing to see Batman talking about much fun he was having fighitng crime and such.

Somehow the threats of rape didn't even make an impression.

I was an odd child.

In case anybody wants to read the whole thing, it's on 'His Name Is ... The Gil Kane Blogspot'.

And just for the record, if Brigit was a total loon and a nazi, I'd consider it.

I find it hilarious that someone not only gave Curt horror-movie dentures to compensate for his maiming, they gave him a matching bottom set that sticks on his metal jaw.

Did Kane ink this story himself, then? And was that a rare occurence this late in his career?

Seth--At this point in his career, Kane inked his own pencils most of the time. In nearly every comic of his that I have from about 1980 until the late 90s, he does his own inking. In Kane's last years, Kevin Nowlan does the inking over Kane's pencils (including a Superman Elseworlds story written by Chaykin that I need to get my hands on). Nowlan is among the best inkers to work with Kane.

Gil Kane was generally dissatisfied with most of the inking work done over his pencils at DC during the Silver Age, so I always thought that he did his own inking later because of that.

I spend years thinking I didn't read enough comics when I was a kid, and then posts like this come along.

The word verification for this was "nusses." I believe that says it all.

My heart's beating louder than a big bass drum--

but next poem I write will be titled "In her Psychopathia"--thanks for the gumball, Mickey!

Man, I have a dump truck full of LotDK pulled from the quarter boxes, yet had never seen this one. Now I'm sad.

In Chaykin's Batman: Dark Alligences Elseworlds, Bats notes enjoying the hell out of being Batman, too. Guest starring Hitler. Um...huh.

Wow, I missed this one when it came out. Chaykin and Kane together? I'll have to check this out. (Did you know Chaykin was a ghost artist for Kane on Star Hawks?)