I have had a couple of occasions where I've encountered a movie on its own that I had previously seen on MST3K, only to find the movie itself not half bad. One particular example is the 1961 film Bloodlust! 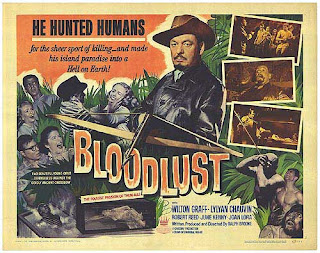 Bloodlust!, written and directed by Ralph Brooke, is one of 1,512 remakes of The Most Dangerous Game. And while it's certainly inferior to the original, I wouldn't hold that against the later film. However, I do have to admit that I have a soft-spot for this plot, where a hunter stalks human prey in a deadly game. In fact, I wouldn't mind if every movie were a remake of The Most Dangerous Game. Especially Eat Pray Love.

So, though Bloodlust! is no Battle Royale, or even Hard Target, it manages to be an effective movie within its budgetary limitations and occasional ridiculousness. Its novelty appeal, which clearly made it game for MST3K, comes from the fact that it stars a young Robert Reed as Johnny, the alpha male leader of a group of four young kids who end up stranded on an island controlled by the insane, megalomaniacal hunter, Dr. Balleau (Wilton Graff). Despite Reed's assertive performance, Johnny is a pretty crappy leader, often making terrible decisions that put the gang in even more danger than they were in before. In fact, whatever success they do have comes more from dumb luck than from Johnny's leadership.

The movie also establishes early on that Johnny is an excellent shot, though he never gets to utilize this talent in the battle against Balleau. His girlfriend, Betty (June Kenney), fares a little better. We learn that she's a judo expert at the beginning of the film, and she does eventually get to flip a dude into a tub of acid, but otherwise I'd count this as a missed opportunity as well.

Balleau is a former WWII sniper who got the taste for killing early in his military career, and he's turned his considerable wealth into this island paradise, where he gets to hunt humans at his leisure. He sets up fairly rigid rules for each hunt, proposing to give his prey an equal and fighting chance against him. For example, his weapon of choice is a crossbow, and he only carries as many bolts as there are prey. He also gives his prey a pistol with one bullet to even the odds. However, the gun doesn't work, and he reuses the crossbow bolts on multiple victims, which is a good way of spreading hepatitis.

The movie's low budget does not prevent it from being surprisingly gruesome at times. Two of the kids stumble acrosS Balleau's lab, where the mute servant Jondor assembles his master's trophies from human skin and body parts. The trophy room itself is pretty cool, too. Each human trophy is arranged in the pose he or she was in just before death. One guy is in a defensive position, with an arrow going through his hands and into his eye. Balleau also has his wife and her lover stuffed in the trophy room, captured in their final embrace.

Even with some of these gruesome moments, the movie has an appealing Scooby-Doo-feel to it. It manages to rise above its limitations, and at a tight 68 minutes, it doesn't overstay its welcome, either. But why take my word for it? You can watch the whole freaking movie right here:

Wow Dr. K! The whole movie up - cool. Youtube had Two Sisters up without subtitles, so I've seen it but I don't really know what happened.

I'm following your countdown right to the bitter end on Halloween.