Halloween Countdown Day 25: The Devil Within Her 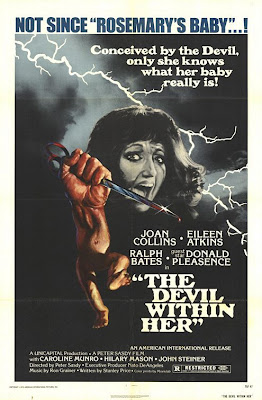 The Devil Within Her (1975, a.k.a. Sharon's Baby, a.k.a. It Lives Within Her, a.k.a. I Don't Want to Be Born) looks on the surface to be a late Hammer production, including such Hammer alums as Ralph Bates, Caroline Munro, and Joan Collins, along with direction from Hammer stalwart Peter Sasdy. It also looks like a low-rent Rosemary's Baby or The Exorcist rip-off, which it is, for the most part (even the poster seems to acknowledge that). However, in the final half-hour, the movie becomes suddenly, surprisingly batshit crazy in a way that's barely hinted at in the first hour.

In fact, the film is downright terrible for the first hour, wasting the potential of a great cast, that also includes Donald Pleasance and Eileen Atkins. Joan Collins plays Lucy Carlesi, an ex-burlesque dancer who, when we first see her, is in the process of giving birth. Her OB/GYN, Dr. Finch (Donald Pleasance), seems to be having some trouble and blurts out, "It's like he doesn't want to be born."

I'm going to stop right here and explain exactly why this movie fails to live up to its potential. A movie that casts Donald Pleasance as Joan Collins's OB/GYN should be in the running for greatest movie of all time, and this opening certainly sets that up with the normally indefatigable Pleasance starting to lose his shit at this difficult birth. But, unfortunately, we have to wait an hour for the movie to really kick in.

The baby is finally born, much to the excitement of its dad, Gino, played by Ralph Bates. For no really good reason, Gino has an Italian accent, and Bates, who is otherwise great in his Hammer appearances, just can't pull it off. But he sounds like a native speaker next to Eileen Atkins, who plays his sister, the nun Albana. One can only assume that Atkins has never actually heard an Italian speak before, especially when she says stuff like, "Your child is a day-vill."

When Lucy first tries to feed the baby, he scratches up her face pretty badly, and this sets up an aversion to the child from which Lucy won't recover. Later, when the baby trashes his nursery like it was Led Zeppelin's hotel room, Lucy realizes something is truly wrong with the tyke. He also throws a total freakout when they try to have him baptised.

She then flashes back to her stripper days, when she had a bizarre act that involved a dwarf hunchbacked sidekick named Hercules. Hercules tries to feel her up backstage, and when she rebuffs him, he puts a curse on her and her future child. Soon after that, she meets Gino and begins what she hopes to be a normal domestic life.

The introduction of Hercules here sets up the rather awesome final act, where the baby does some crazy and unexpected shit. Still, it would be nice if the movie had been paced a little better, with the crazy shit escalating earlier. Also, much of the excellent cast is wasted, especially Pleasance, who would be so good a few years later doing a similar role in Halloween. Caroline Munro may be the movie's biggest victim, however, as Mandy, Lucy's stripper buddy. For some reason, Munro is dubbed, and dubbed poorly. But when the movie finally does step on the crazy throttle, it reveals what this movie could have been, which is one of the classic horror movies of period.
Posted by Dr. K at 11:17 AM

I have just downloaded iStripper, so I can watch the sexiest virtual strippers on my taskbar.