I've recently received a letter from my faithful young reader, who asks a question so important that I had to answer it immediately: 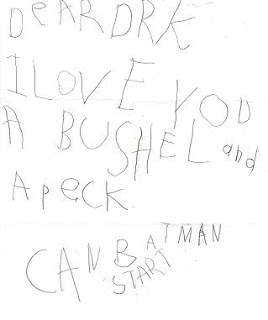 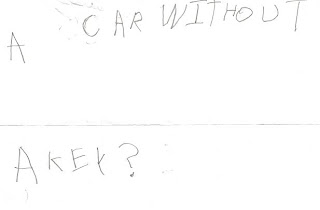 First of all, thank you for the letter. Letter writing is a dying art form, so I'm glad that you are helping to keep it alive. I was very excited to see your letter in the mailbox alongside bills, solicitations for new phone service, and information about local politicians running in the upcoming elections.

Also, I love you a bushel and a peck, too, which, from what I understand, is a significant amount.

I felt that your question was of the utmost importance because it gets at the heart of something very important: that Batman is better than all of us, so he does not need the normal things we need in our day-to-day lives, like keys to start cars.

And by "car," I assume you mean "Batmobile." Though I would guess that Batman could pretty much start any car without a key because he's Batman.

So, let's take a look at what happens here, when the nasty Joker tries to steal the Batmobile and make a getaway: 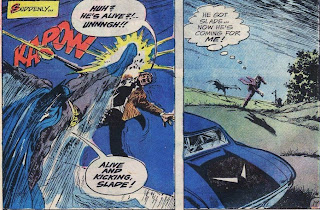 I included the first panel because that is a pretty awesome kick to the head that Batman delivers, and who doesn't love to see that? That guy is not getting up for a long time.

Then, when the Joker tries to steal the Batmobile, look what happens:

As you can see, the Joker does need a key to start a car, and that is one of the reasons why Batman will always win against the Joker.

In order to show off just how smart he is, Batman reveals to the Joker just how the Batmobile starts without a key: 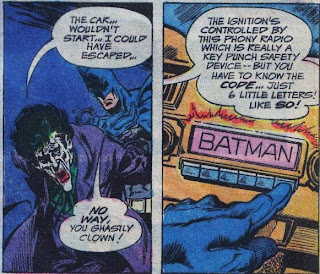 Notice that Batman's password is "Batman." Little known fact: that is also his ATM code. At first glance, that seems pretty stupid to have your own name be your password, right? (Note to self: change password.) But Batman is really thinking here. A bad guy could break into the Batmobile, and if he figured out that the ignition was controlled by the fake radio, he still wouldn't type in "Batman," because he'd think that Batman wouldn't be stupid enough to use his own name as the password. See how that logic works? Batman is really smart.

Also, Batman doesn't need a radio in his car, mainly because he hates how corporate radio has ruined the medium.

Thanks again for your question, and I would be glad to answer more in the future.

And I would also like to extend an invitation to all readers out there: if you have or know of young children with pressing questions about superheroes and comic books, please pass them along. I would be happy to answer any that come my way.

Also, if I'm remembering my B-canon correctly, Batman has On*Star.

I challenge Dr. K to come up with a song list for Batman. What does Batman listen to? And I'll consult my young Batman enthusiast on this matter--I'm betting a little Cat Power will show up on this list.

Can the Joker break Batman's car with his fists? I think he can really do that, maybe, but I'm not really sure.

Can the Joker break his own house down with a chainsaw? I don't know.

Thank you for the answer. That was really cool how he can start the car without his key alright.

One more question: Can Batman jump from a tree to another tree?

MD247 doctors and telemedicine program members are legitimately given the opportunity to connect, allowing a patient the chance to talk to a doctor without that doctor worrying about time and overhead.
ask a doctor