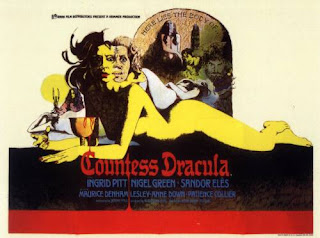 One thing to note about Countess Dracula is that the title is really misleading. No actual vampires appear in this movie, and the title character is in no way connected to the Dracula family. Instead, Hammer went to the horror well to find new source material and came up with the historical story of Countess Elizabeth Bathory, who was rumored to bathe in virgins' blood in order to stay young.

And that is basically the plot of this movie. The film opens with the funeral of Count Nodosheen, and at the reading of his will, the aging Countess finds out that she has to split most of the estate with her absent daughter. In addition, a young man named Toth--the son of a soldier who served in the military with the Count--inherits the stables, horses, and cottage. Also, Captain Dobi, who is the Countess's lover and the Count's chief steward (played by the great Nigel Green), is pissed because all he gets are a few lousy suits of armor.

As the Countess prepares for her bath that evening, she beats her servant for making the bath too hot. The Countess gets some blood on her face, and quickly discovers that it causes part of her face to look younger. She then enlists her nurse and Captain Dobi to retrieve the servant and see what a full-body blood dousing will do. It has the desired effect, and she becomes a young woman again.

This, and all the subsequent blood-bathing that follows, happens off-screen, which some may find as a drawback for a horror movie. In fact, one of the problems with this film is that it's not much of a horror movie. Instead, it's a kind of romantic melodrama with some supernatural undertones. The Countess spurns her older lover, Dobi for the dashing young Toth. But in order to pull off this romance, she has to pretend to be her daughter. This creates some problems, as the daughter (played by a young and almost unrecognizeable Lesley-Anne Down) is on her way to the castle. Dobi arranges for some Serbs to kidnap her before she arrives.

Toth falls in love with the young Countess, and she becomes increasingly desperate to keep her young appearance. After bathing in the blood of a whore, however, she discovers that not all blood will work. And she has a nasty case of hepatitis. What she really needs is some virgin blood.

In general, the movie doesn't quite live up to the potential of its subject matter. Some class conflice emerges early in the movie, as the Countess's first victims are a servant and a gypsy, but the movie really does nothing with this until the end, when the local village women celebrate the Countess's execution. Also, the inherent potential for sex and violence the Elizabeth Bathory story is almost completely missed, and that in particular seems odd, considering how excessive Hammer would become along those lines in the next few years.

However, the movie does look very good, and Ingrid Pitt also looks great, though she's unfortunately and unnecessarily dubbed throughout the movie. Also, Nigel Green seems to be having fun as the flustered and quite whipped Captain Dobi, who continues to do the Countess's dirty work while she prances right in front of him with her young boy toy.

Here's a link to the trailer for Countess Dracula. One of the things evident in the trailer: the aging makeup used on Ingrid Pitt is actually pretty good.
Posted by Dr. K at 3:18 PM