One tie-in I should have included in the previous post was the Final Crisis Sketchbook, which actually preceded the regular series and reveals just how far the initial plans for the series changed in the final product. 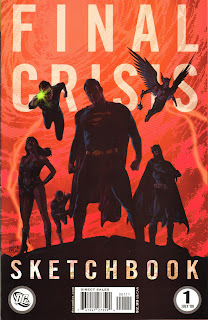 The foreward indicates that Morrison and artist J. G. Jones met in May 2007 to begin initial plans for the series, and from the content of the sketchbook, it looks like they generated a shit-ton of ideas, many of which never made it into the series. For example, they came up with redesigns for the New Gods and Forever People (the latter being completely revamped and updated). Only the designs for Darkseid, Metron, The Black Racer, and Mister Miracle appear in Final Crisis (and the Mister Miracle design was previously used in Seven Soldiers). 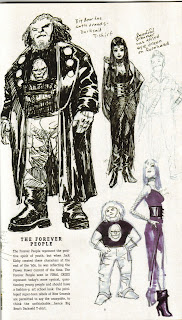 The Forever People update is particularly fascinating. As the scan shows, Morrison's idea was to make the new Forever People the 21st century equivalent of what hippies were for the youth of the 60s and early 70s. This makes some sense, as the Forever People have always been the Fourth World concept that aged the worst. However, it would only be a matter of a few years before this concept were to become dated once again. (I do, though, think the updating of Vikin the Black as "Black Viking" is pretty cool.)

The most extensive and detailed concepts in the sketchbook come in the section on Japanese superheroes, and like the Fourth World updates, most of these never made their way into the series. 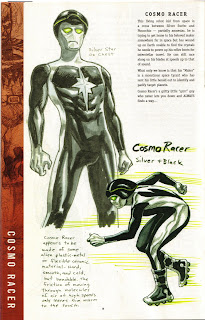 The Big Science Action team is mentioned in the series, but the description in the sketchbook fleshes out their history and members in great detail. Most of the members--Cosmo Racer, Boss Bosozuko, Hammersuit Zero-X, and Junior Waveman--are fusions of Marvel characters with Japanese pop culture. Jones's art in this section is much less sketchy, looking like Big Science Action got well beyond the idea stage and may have been jettisoned late in the game. Even the Super Young Team, which has a prominent role in Final Crisis, does not look as clearly developed or finalized as a concept. Morrison has created out of whole cloth a history of Japanese superheroes in the DC Universe, and I'd like to see DC run with a Super Young Team series that would capitalize on these ideas.

At the time the sketchbook came out, it was difficult to see how all those ideas were going to work together in one series. And clearly, Morrison is an idea machine, and those ideas may get diluted as they move from that initial stage to the final product. Whatever the case, the sketchbook probably gives us the closest thing to undiluted Morrison as we can get, and it would be interesting to see more of what was generated during these brainstorming sessions.
Posted by Dr. K at 11:41 PM

You don't do a great job of selling the book with your picks.

Imagining 60s hippy team the forever people as 00 hippies? Not too impressed.

Actively disliking ANYONE associated with publishing the idea.

If there are good ideas in there you don't seem to be showing them.

I love the idea of DC doing Marvel pastiches. Everyone has been doing JLA satires for thirty years, so it is only fair.

I also love the idea of other companies superheroes being from other cultures. With the acquisition of the Red Circle properties, it makes me wish they would have assigned them to South America.