Superman Beyond 3D is certainly essential to understanding the conclusion of Final Crisis, and that contradicts statements made by Dan DiDio and Grant Morrison that one could follow the main series without reading the tie-ins. In fact, many of the problems with Final Crisis seem to stem from the marketing of the series before its release. It would be nice if, as a result of this series, DC developed more secure marketing plans for its events, which could be sustained without contradiction throughout the event.

I don't want to spend to much time on the marketing of the series, as it really has no bearing on the story itself, and it will ultimately be irrelevant as the series moves in to its future as a collection (the marketing did set expectations for many readers and may have led to some disappointment). I also wonder, though, about the eventual publishing future of this event. The Final Crisis hardcover will not contain Superman Beyond, which I think is a mistake. However, DC is releasing a Final Crisis Companion trade paperback, but I'm not sure what the contents of that will be. At the very least, it should contain the Morrison-penned tie-ins. 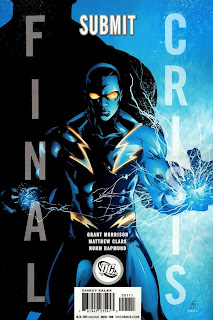 Final Crisis: Submit is probably the least essential of the Morrison tie-ins. In terms of plot, it serves the purpose of getting the Tattooed Man to the Hall of Justice in Final Crisis 4, and it places in his hands the sigil that will resist the Anti-Life Equation. The story also plants the seeds for Tattooed Man's conversion from villain to hero.

While the appearance of Tattooed Man at the Hall of Justice in Final Crisis 4 is sudden, it's not the only sudden, unexplained appearance of a character in that scene, or in the series in general. I can't imagine, if I hadn't read Submit, that I would be any more confused by the character's appearance than I would Green Arrow's, The Ray's, or Wally West's family. Hence, the tie-in does not fill in any significant blanks in the series, and there are probably many more significant ones later in the series that could use some elaboration and explanation.

As it is, though, Submit is a satisfyingly straightforward story, and a departure from the more disjointed storytelling technique that Morrison uses in the main series. In fact, the story is fairly basic in its plot: Black Lightning rescues Tattooed Man and his family from the Justifiers before submitting to their control himself. But, as it stands, it is also fairly unremarkable in relation to the rest of the series as well. At the very least, Morrison proves that he can do a plot-driven action story. 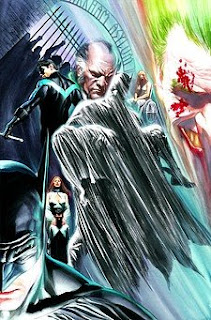 Batman 682 and 683 are a different matter. These issues are, for Batman, the equivalents of Superman Beyond. These issues take Batman from his capture in Final Crisis 2 to the point where he could shoot Darkseid with the god bullet in issue 6. In a storytelling style similar to the later issues of Final Crisis, the narrative is disconnected and nonlinear, but the explanation for that becomes apparent at the end of the first issue: Batman is being subjected to a psychic attack as a prisoner of Darkseid's minions, Simyan and Mokkari, after his capture in Final Crisis 2.

In these two issues, Morrison takes us on a Cook's tour of Batman's career, from the goofy Silver Age stories to the grittier modern stories. These two issues present a perfect encapsulation of Batman as envisioned by Morrison. Morrison's Batman, as depicted here and in RIP, can beat any attack because he has prepared for them all, and a psychic attack that might destroy a powered hero will not bring him down. I especially like Morrison's take on the Joker, showing how Batman's arch nemesis can move from comic villain to homicidal maniac yet still consistently remain the same character. If anything, I hope Morrison's work on Batman sets a new status quo for the character whenever he returns after "Battle for the Cowl."
Posted by Dr. K at 10:10 PM

I thought Submit worked as a good way of showing what happened between panels. Morrison could have had Tattooed Man show up and say "Black Lightning gave me Metron's sigil and saved my family." and then do a face turn. Watching it in Submit seems to make it more organic, and I can extrapolate that similar expansions are behind the sudden events throughout the series.

In a series where Superman is the champion of Fiction itself, and cave painting and storytelling are a story elements, it seems sensible Morrison is creating an opening for more stories to come from such a compressed (and information-dense) tale.